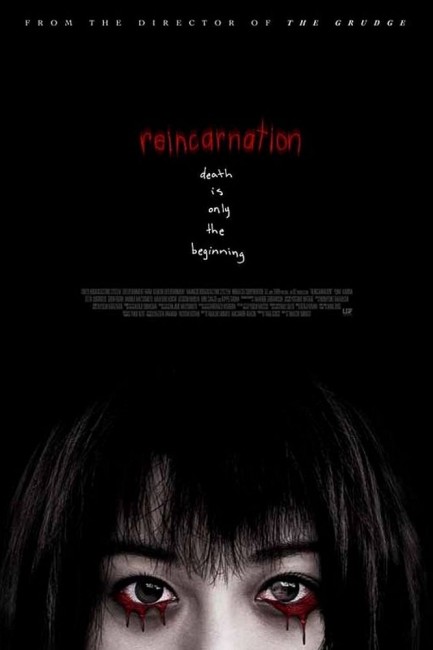 Novice actress Nagisa Sagiura auditions and wins a leading role in the film Memories from director Tadashi Murakawa. The film is based on a series of murders that occurred in 1970 where Professor Oguri went amok at the Gunma Hotel, slaughtering staff and guests alike. Nagisa is hired to play the role of a young girl who was one of the victims, although her age has been raised for the film. Almost immediately, Nagisa begins to have visions of the murders and believes she might be the reincarnation of the young girl.

Reincarnation was a film from Japanese director Takashi Shimizu. At the time that he made Reincarnation. Shimizu was a hot name on the basis of the hit Japanese ghost story Ju-on: The Grudge (2003). He promptly made a sequel Ju-on: The Grudge 2 (2003) and the strange Marebito (2004) before being taken to the US by Sam Raimi to make an English-language version of the Ju-on films with The Grudge (2004). All of that before returning to make Reincarnation, which failed to prove as big a success as the Ju-on films were. (See below for Takashi Shimizu’s other genre films).

The idea of a horror film about actors who begin to identify too much with the role they play has been done before in the likes of A Double Life (1947) and The Flesh and Blood Show (1972), while a few years later it was also conducted in Japan with Takashi Miike’s Over Your Dead Body (2014), although all of these were based around stage plays and opt for psychological explanations. Not long after this, David Lynch also made Inland Empire (2006) where an actress in a film begins to blur between her role and past events. There was also Kantemir (2015), a horror film about a cursed play taking over its actors.

One of Takashi Shimizu’s strengths is the ability to create an intensely haunted mood. He deploys that to good effect here with the appearances of the little girl in the background or the red ball bouncing into scenes and the empty hotel location suddenly becoming filled with ghosts of the dead. There is a great scene in a library where Hiroto Ito walks down an aisle of bookshelves only to see the doll eerily sitting atop one of the shelves then parting the books to see faces looking back at her and being abruptly snatched up and overhead as Karina comes searching for her.

The main problem with the film is that it is a fairly solid build-up but never comes together at the climax. The script talks about reincarnation and has Yuuka receiving visions from the little girl and believing she is that little girl reincarnated, while there are lectures about forgotten memories. Despite this and even though the film names itself after such, the central theme of Reincarnation never plays out any more than that. You could have easily taken any mention of reincarnation out of the film and played everything as a standard Ghost Story. Nor is the secondary story following Karina tied to anything, while the eye-catching abovementioned scene where Hiroto Ito vanishes in the library is just left as an unresolved story strand.