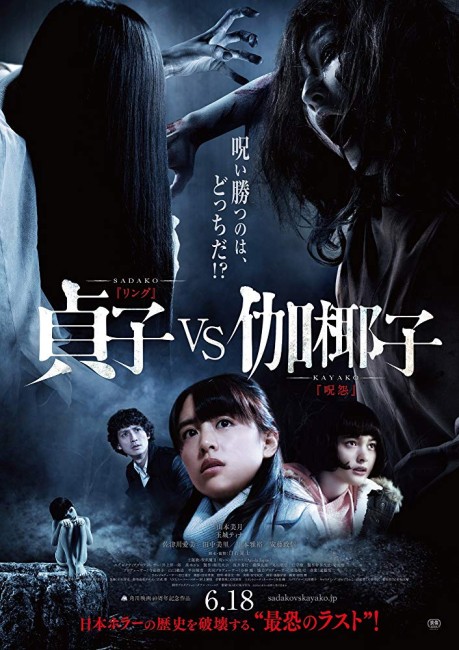 Kurashishi is asked by her best friend Natsumi to transfer a copy of her parents’ wedding video from VHS to dvd. Yuri goes to a second-hand store and buys an old VCR player. Back home, she and Natsumi find a tape in it. While Yuri is not looking, Natsumi plays the tape and is shocked to find it is the legendary cursed tape of Sadako that they have learned about in class. Moments later, she receives a phone call and realises that she has two days to live. At the same time, Suzuka Takagi ventures into the house neighbouring hers and discovers the ghosts of Kayako and the young boy Toshio. Yuri and Natsumi take the tape to their professor who becomes obsessed with talking to Sadako. He takes them to an exorcist but Sadako emerges from out of Natsumi and kills them. In her dying breath, the exorcist urges the girls to find Keizo Toiwa. Once they do so, Keizo comes up with the idea of nullifying the two curses by setting Sadako and Kyoko against one another.

Sadako vs Kayako was originally floated as an April Fool’s joke but the response was so popular that Kadokawa, the copyright holders of the Ring franchise, went ahead and made the film. The result is a stunt film in much the same way that Frankenstein Meets the Wolf Man (1943), King Kong Vs. Godzilla (1962), Freddy vs. Jason (2003), AVP: Alien vs Predator (2004) and Batman V Superman: Dawn of Justice (2016) operate in drawing audiences in with the novelty of seeing two popular franchises coming together. (For other examples see Crossovers).

Both of the original franchises worked on a sense of intense uncanniness. However, what you end up with when both are brought together is a diluted version of that at best. In particular, the Ring curse is brought down from seven days to two days, no doubt in order to have the story take place in a more condensed timeframe. The Ju-on series always specialises in non-linear plots that jump back and forward across time, following various victims affected by the curse, but that has likewise been curtailed.

In the original Ring films, the curse was spread by a haunted video broadcast, whereas it has now become a haunted video recording, something that only came in in the English-language remake The Ring. Certainly, we do get the amusing sense of the Ring franchise updating with the times where we have gone from a haunted videotape (a now obsolete technology in the eighteen years since Ring premiered) to the curse now being spread by a viral internet video.

The film assumes that people are familiar with either series and so the appearances of Sadako, Kyoko and associated phenomena are stripped down to a few spooky scenes without much wider rationale beyond that. Director Koji Shiraishi produces a fair facsimile of the spooky scenes that we get in the other films. In particular, there is a fine sequence where the spirit of Sadako takes over Aimi Satsukawa during the exorcism to slaughter the exorcist and attendants, and another where Aimi goes to hang herself and Sadako’s ghost appears. One fine addition to the franchise(s) is the character of the exorcist Keizo and his accompaniment by the blind girl Tamao.

In actuality, two stories, one about a revenant who curses people who watch a videotape and the other about a ghostly woman and a boy in a house, have no real purpose merging. The film strains to bring them together, coming up with some nonsense about using one curse to negate the other.

The great disappointment of the film is the playing out of its title promise. We never get much of Sadako and Kayako going head to head and duking it out. At the climax, we get few wide-angle shots of them fighting around the well and then the show is over is very short course.