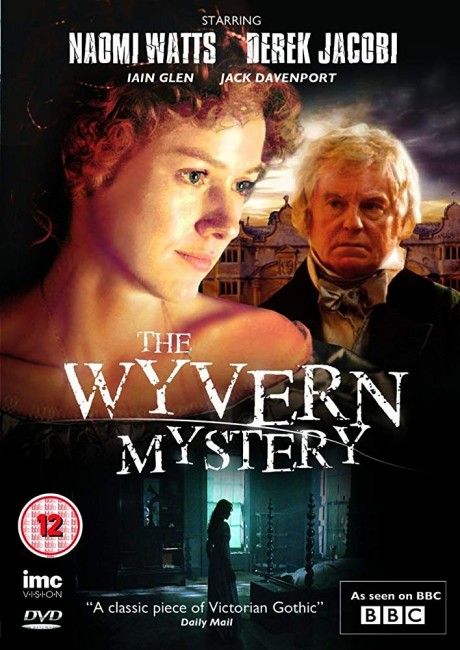 After the death of her father, Alice Maybell is taken in as an orphan at Wyvern Manor and raised by Squire Fairfield. However, as Alice grows into a young woman, the Squire tries to force himself on her and make her marry him. She is whisked away by her secret love, the Squire’s son Charles. The two marry in secret as the Squire charges across the countryside, determined to find her. They settle at Charles’s large gloomy Carswell Grange estate. Once there, Alice begins to see things. She finds that Charles and his brother are keeping secrets about someone called The Old Soldier. A maddened blind woman who has been chained up in the house then manages to burst free and comes to kill Alice, claiming that she is Charles’s rightful wife.

The Wyvern Mystery is adapted from an 1869 novel by J. Sheridan Le Fanu, the celebrated 19th Century Irish writer best known for the oft-filmed lesbian vampire short story Carmilla (1872). This adaptation of The Wyvern Mystery was conducted for tv by the BBC. The teleplay was written by David Pirie, an author who was written two excellent works on the horror film – A Heritage of Horror: The English Gothic Cinema, 1946-1972 (1973) and The Vampire Cinema (1976) – as well as a number of well worthwhile works for British television such as Somerset Maugham’s spy drama Ashenden (1991), the Mad Cow Disease thriller Natural Lies (1992), the adaptation of Wilkie Collins’ Gothic drama The Woman in White (1997), the tv series Murder Rooms (2000-1), which postulates that Sherlock Holmes’ creator Arthur Conan Doyle acted as a detective, as well as The Strange Case of Sherlock Holmes and Arthur Conan Doyle (2005), which turns Conan Doyle’s biography into a Holmesian-type mystery.

Director Alex Pillai pumps the mini-series up with much in the way of looming Gothic threat – shots of crows flying, cuts away to spiders and roaches crawling across things, Iain Glen seen to be threateningly pawing at Naomi Watts’ top as she sleeps. There are some fine spooky scenes with the mad wife bursting through a wall to wildly attack Naomi Watts despite being blind. That said, rather than going for horror movie effect, the mini-series emphasises period realism. The mini-series also boasts a beautiful score.

On the minus side, the major problem that The Wyvern Mystery has rests with J. Sheridan Le Fanu. The book was written in the full Gothic cycle popularised by late 18th/early 19th Century authors like Anne Radcliffe and Wilkie Collins and is reliant on the heavy-handed brooding mood, improbable twists and revelations. The mini-series certainly feels dense and heavy going in terms of watching, even if the mood works.

The Wyvern Mystery boasts an interesting cast, including in the lead Naomi Watts some time before Mulholland Dr. (2001), The Ring (2002), King Kong (2005) et al. She receives support from the underrated Iain Glen and the great British acting legend Derek Jacobi who makes a surprise turnaround in a thuggish role as the Squire.