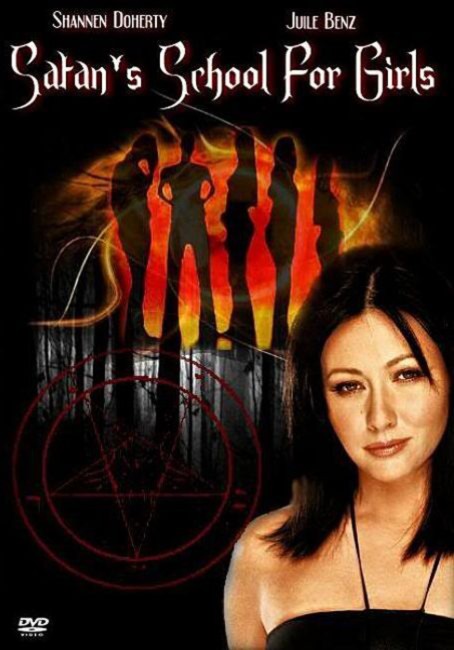 Jenny Hammersmith flees from the Fallbridge College for Women back home to Seattle. However, once in the house she is killed by a supernatural apparition. The police put it down to a suicide. Her sister Beth knows that Jenny was trying to tell her something about the school before she died. Beth obtains a fake driver’s license and signs into Fallbridge under the name of Karen Oxford, determined to investigate the circumstances of Jenny’s death. She becomes intrigued by a mysterious clique known as The Five who left a wreath at Jenny’s funeral. As she begins to dig deeper, she comes to believe that The Five used Satanic powers to kill Jenny and that they are now trying to recruit her because of her latent psychic abilities.

Satan’s School for Girls is a tv movie remake of an earlier tv movie Satan’s School for Girls (1973). The original was made by Aaron Spelling who would go on to produce hit tv shows like Charlie’s Angels (1976-81), Fantasy Island (1977-84), The Love Boat (1977-86) and Beverly Hills 90210 (1990-2000). The original was a largely routine tv movie with Pamela Franklin signing into a girl’s school to find the cause of her sister’s suicide and finding occult forces at play. The original’s greater distinction was featuring an early performance from Kate Jackson, later of Charlie’s Angels fame, as one of the students, as well as a smaller role from another of Charlie’s Angels Cheryl Ladd. The influence on the film was almost certainly Rosemary’s Baby (1968) and its creation of a hellspawn of copycat films concerned with matters occult.

One has a sinking feeling about the remake from the names on the credits. Aaron Spelling’s production company is still producing the show. Christopher Leitch is a tv director whose only cinematic outing was Teen Wolf Too (1987), while writer Michael Hitchcock is mostly a light comedy actor who has been involved in Mad TV (1995– ) and scripts for kid’s films like Problem Child 3 (1995) and HouseArrest (1996), later graduating to a producer on shows like Glee (2009-15) and Crazy Ex-Girlfriend (2015-9).

In no time at all Satan’s School for Girls sinks in with a feeling of a tv movie that has been considered as no more than time filler by those involved. It is directed and written with a lack of interest. The photography and lighting is flat. The supernatural scenes, apart from a modestly cool supernatural apparition that appears in the opening scenes, are lacking in any magic or atmosphere. The CGI transformation effects look cheap.

The script fairly much follows the original. There are one or two modern touches – The Five now seem like a bunch of Goth Chicks and some of the girls can now be gay/bi. The remake is allowed to push the envelope in ways that might have made the staid original blanch – like a scene where Julie Benz gets to make out with her professor (Richard Joseph Paul) across his desk clad only in a bra. But there’s not enough reinvention or modern irony in the script to make Satan’s School for Girls interesting as a remake.

Moreover, there seems vast plausibility holes in the script – Shannen Doherty has one of those miracle jobs as a receptionist where she can quit, has enough savings to instantly join a college (all seemingly without any kind of references or paperwork other than a fake driver’s license) and go off to chase something that her dead sister vaguely mentioned. The twists offered up are rather lame. The Goth chicks led by Victoria Sanchez are set up as the Satanists – Shannen Doherty even has a dream sequence where Victoria enters her room and cuts her with a dagger – but then they are revealed not to be the Satanists. Shannen Doherty is given latent psychic powers – but these are not explored in any way, rather are just set up for the Carrie (1976)-like climax where she is able to despatch the cultists by calling lightning down on them.

The majorly disappointing thing about Satan’s School for Girls is that it has a great exploitation title. If Aaron Spelling and co had waited a couple of years later until the 70s/80s remake cycle came along with The Texas Chainsaw Massacre (2003) and Dawn of the Dead (2004), you could easily imagine a much edgier, R-rated version of Satan’s School for Girls conducted as a cinematic remake.

In a nod to the original, a now middle-aging Kate Jackson turns up as the dean of the school. Now in her fifties, with her tall 5’9” frame and face having thinned out, Jackson looks positively spooky in the role and plays the part with an alarming intensity.