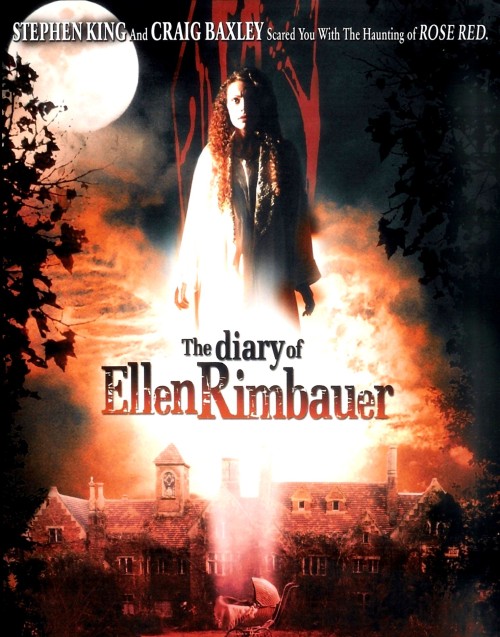 Seattle, 1910. Ellen Gilchrist marries John Rimbauer. He builds a mansion for her as a wedding present and they name it Rose Red. They take a world tour while the house is being completed, during which time Ellen comes to discover John’s perverse sexual appetite. In Africa, Ellen takes a maid in Sukeena, who becomes her constant companion and confidante. As they return to Seattle and settle into the completed Rose Red, strange things begin to happen. Guests, maids that John has had his way with and then their daughter Alice all mysteriously vanish. Gradually, Ellen comes to realise that the house has become sentient and that it wants her to keep building and adding more to it. However, doing so means Ellen having to strike a devil’s bargain with John.

The Diary of Ellen Rimbauer is a tv movie prequel to the Stephen King-penned tv mini-series Rose Red (2002). Director Craig R. Baxley and Tsidii Le Loka, the South African actress/singer who played the unnervingly wide-eyed maid, are the only ones to return from Rose Red. Stephen King is absent in the scripting department, although is credited as an executive producer.

The film is based on a novel The Diary of Ellen Rimbauer: My Life at Rose Red (2002), which was originally written as a tie-in with the mini-series. In a cute touch, the original Diary of Ellen Rimbauer novel was credited to Joyce Reardon PhD – a credit that is retained on the tv movie here – who was, of course, the character of the parapsychological researcher played by Nancy Travis in Rose Red. The real author, called “Joyce Reardon’s translator”, was Ridley Pearson. Pearson is a prolific writer in numerous genres, including a number of children’s books and thrillers, most notably co-writing the Peter Pan prequel Peter and the Starcatchers (2004) with humorist Dave Barry. Ridley Pearson also writes the teleplay for the mini-series here.

Ridley Pearson writes a number of scenes well. There is the wonderful bitchery to the scene where Lisa Brenner calls her husband’s mistress Deirdre Quinn to her and tells her that her services will no longer be needed in attending her husband now that the baby she is pregnant with is nearly due. I also liked the moral quandary that Pearson manages to hang the story on – Ellen promises Rose Red that she will build it to the heavens but when people start to go missing, she and John realise that they need one another – he to provide for the building of Rose Red, she to abet in his cover-up over the missing maids, and that she must give herself to John as sacrifice to ensure the greater sake of Rose Red. Pearson manages to juggle these aspects with some complexity. Another well written and directed scene is the one where the children come in on father Brad Greenquist as he is about to hang himself after John’s threat to expose his homosexuality, where he convinces the children to play a game of hide’n’seek, all the while tying the noose behind their back.

Director Craig R. Baxley manages to push the envelope of the medium, including a scene that contains an admirable mixture of perversity and eroticism where Lisa Brenner lets Steven Brand tie her to the bedposts and then places ice cubes all over her chest. That Baxley was able to get away with such a scene on television is remarkable – we might have ended up with an even more remarkable film had Baxley been shooting for an R certificate rather than a PG-rating. That said, in all the film’s talk about perverse pleasures, Ridley Pearson unfortunately falls back on a cliched (and at times uneven) view of these – that fetishes like bondage are corrupt and evil, and of the innocent wife who tolerates these with abhorrence but is contrarily also able to express lust when the situation requires.

Perhaps the biggest downside of The Diary of Ellen Rimbauer is that, despite being a sequel to Rose Red, it is rarely a haunted house story at all. The hauntings and the house’s parasitic nature are pushed to the background. Indeed, there is almost no time given over to explaining what agency caused the house to become what it is – while in Rose Red, Stephen King gave the impression that it was the cruelties and the wife’s closetedness that caused the house to become what it is, The Diary of Ellen Rimbauer shoulders it all off in a one sentence explanation about Indian burial grounds and then says that what King had go on in his flashbacks (which is the essence of what The Diary of Ellen Rimbauer is meant to be telling) was not the cause of the haunting at all.

What comes to the forefront of The Diary of Ellen Rimbauer is instead the story of the perverse devil’s pact between the husband and wife. If there is any comparison that could be made between Rose Red and The Diary of Ellen Rimbauer one could point to the excellent ambiguous ghost story The Innocents (1961) and Michael Winner’s crude prequel The Nightcomers (1971), which dropped all ghost stories and explored the sadomasochistic relationship of the two servants who corrupted the children.

The Diary of Ellen Rimbauer also reverses the sympathies of Rose Red. The house has gone from a malevolent entity in Rose Red to more like a brooding and distant but ultimately caring Earth Mother figure – in fact, John is clearly a much more evil force than the house is in the film. Here Ridley Pearson has drawn his good and evil distinctions along distinctly masculine-feminine lines – John’s masculine lusts are evil, while Ellen, Sukeena and the house are feminine and innocent. The only scenes where we do get a glimpse of the house’s malevolence is the scene where Tsai Chin tries to tell Sukeena that the house will kill Alice, but this is not explored any further and certainly not given enough of the time it needs. One suspects that The Diary of Ellen Rimbauer had many of these problems forced on it by the decision to shoot it as an 88 minute tv movie rather than give it the full six-hour length that Rose Red enjoyed. Even a two-hour length might have given Ridley Pearson more elbowroom to tell the story that he seems to want to.

The Diary of Ellen Rimbauer is helped a great deal by two good performances in the lead roles. As the title narrator, Lisa Brenner has a lovely elegance. Ellen Rimbauer is a part that requires Brenner to alternate between radiating class and a vulnerable fragility. The vagaries of the writing tend to push the character of Ellen Rimbauer in different directions and one suspects were it not the enormous sympathy that Lisa Brenner creates, the character of Ellen might have merely come across as schizoid. There is also a fine cruel and harsh, yet also charming performance from Stephen Brand as John Rimbauer. The film also contains performances from Brad Greenquist, who might also be remembered as the undead Victor Pascow from another Stephen King adaptation, Pet Sematary (1989). The surprise name among the cast is 66-year-old Chinese-born actress Tsai Chin, better known as Lin Tang, the daughter of Fu Manchu in the 1960s Christopher Lee Fu Manchu movies.

Tsidii Le Loka was one of the spooky finds of Rose Red. Her heart-shaped face, tiny mouth and expressively large eyes had wonderful presence, but with her character brought out into the open here, Le Loka loses all her mystery. Now Sukeena only seems to be is the cliche of an African servant who speaks in ominous premonitions. More disappointingly, taking away the character’s veils of mystery only tends to reveals Tsidii Le Loka’s limitations as an actress.

Director Craig R. Baxley was a former stuntman who premiered as director with Action Jackson (1988) and went onto to maintain a reasonable career as a genre director. His other films include the action film Dark Angel/I Come in Peace (1990) with two cops hunting an alien; the incomprehensible Deep Red (1994) about the search for a child carrying an alien virus; the worthwhile psycho-thriller Under Pressure (1997) with Charlie Sheen as a fireman who snaps and starts terrorising his neighbours; and the Christian Anti-Christ film Left Behind: World at War (2005). Baxley has made a host of Stephen King tv mini-series’ including Storm of the Century (1999), Rose Red (2002) and Kingdom Hospital (2004). Baxley has also made a variety of genre tv movies including the superhero film Chameleon II: Death Match (1999); The Glow (2002) about a conspiracy of immortals; the mini-series The Triangle (2005) about the Bermuda Triangle; and the amazing The Lost Room (2006) about a quest for everyday objects with mysterious powers.