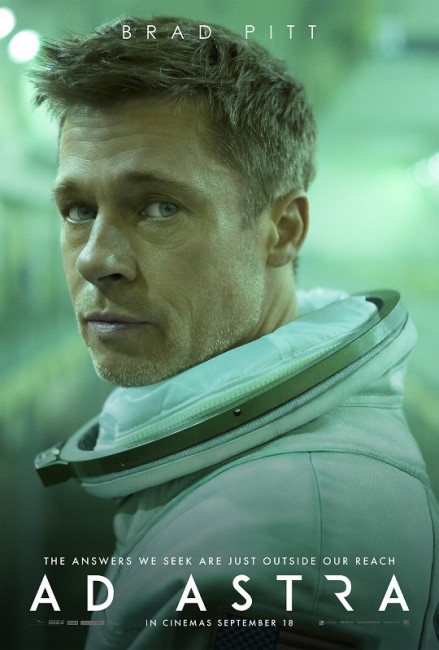 Roy McBride is the son of the celebrated astronaut H. Clifford McBride and has followed his father’s footsteps into the United States Space Command. McBride Sr headed the Lima Project, an expedition to explore Neptune that left 27 years ago – however all contact was lost with them sixteen years ago. Roy is now asked to go on a mission by his superiors. They have sudden new evidence the Clifford is still alive. The Lima Project may be related to what is being called The Surge, a series of anti-matter energy bursts that are wreaking havoc with electronic equipment. Roy is sent to The Moon and from there launched on a top secret mission to Mars aboard the ship Cepheus. On Mars, Roy uses a laser link to try and make contact with his father. However, when he goes off script and makes a personal appeal to his father, he is removed and it abruptly announced that he is being sent back to Earth. He is informed by Mars controller Helen Lantos that sixteen years ago his father killed the rest of the crew after they mutinied against him and that the Cepheus is now being repurposed to carry a nuclear warhead to destroy the Lima Project. Roy breaks orders to sneak aboard the Cepheus just before launch. An accident kills all the rest of the crew, leaving him alone to go out into the unknown and confront his father.

Ever since the enormous success of Alfonso Cuaron’s Gravity (2013), we have seen a rise of interest in space movies in which the rigours of spaceflight were portrayed with scrupulously realistic regard. Gravity was followed by Ridley Scott’s The Martian (2015), which proved almost as big a success. The last few years have seen other realistically-grounded space works such as Europa Report (2013), Approaching the Unknown (2016), Life (2017), The Space Between Us (2017) and on the tv screens The Expanse (2016– ), The First (2018) and the National Geographic channel docudrama series Mars (2016-8), as well as the real-life based films such as Salyut 7 (2017) and First Man (2018).

James Gray is on record stating that he wanted to make “the most realistic depiction of space travel that’s been put in a movie”. Hmm maybe. I think I’d have to give that distinction either to Gravity or 2001: A Space Odyssey (1968), followed by The Martian (with one or two quibbles). Gray does a fairly good job for the most part, although there are the odd bits that one has an issue with. While there is zero gravity in the void and aboard the ships, people on The Moon and Mars don’t seem to be walking in lighter gravity. Neptune’s rings seem far more of a debris-filled field than would actually be the case in reality – the stuff of planetary rings is usually spaced quite aways apart. I’d also question the sanity of Brad Pitt entering a rocket via its exhaust cone while it is in the process of launching – you cannot help but suspect that he, not to mention the ship’s interior that would be exposed once he opens the hatch, is going to get incinerated by the backwash from the jets.

There is also the odd part that the film doesn’t do enough to explain. I don’t quite understand why Brad Pitt had to travel all the way to Mars to deliver a message to his father – could a high quality recording not have been made on Earth and digitally transmitted for re-broadcast from their transmitter? Or for that matter what is actually causing the anti-matter bursts behind The Surge – is it something alien as is vaguely implied or something that Tommy Lee Jones is doing?

All of that said, Ad Astra is a solid and extremely satisfying space film that sits well in the company of Gravity and The Martian. Gray sets up some superlative space sequences. The film opens on a gripping scene with Brad Pitt in free fall from a space elevator and saving himself by opening his parachute as he re-enters the Earth’s atmosphere. We get zero g fights with enraged baboons aboard the Norwegian space station; a sequence with Brad Pitt propelling himself up through the rings of Neptune using a metal plate as a shield from debris; even a sequence with two people fighting in zero gravity. The standout sequence for me though was the breathless chase across the Lunar surface being attacked by pirates that offers the novelty of a standard terrestrial car chase and shootout all taking place in the vacuum.

There is the feeling that the film has been construed around Gravity-styled effects sequences being boiler-plated on rather than to necessarily carry a plot point – most notedly the opening sequence with Brad Pitt falling from the collapsing space elevator. There don’t seem any real reason to have the lunar pirates attacking the moon buggies or the stopover at the Norwegian space station and the baboons loose on it other than to have particular action sequences. Crucially, any more details about who the pirates on The Moon are or what the Norwegians were doing conducting lab experiments so far out in the Solar System is left unexplained as soon as the sequence is over.

James Gray called Ad Astra his version of Apocalypse Now (1979) set in space. There is the same sense in both works of a lone individual on a quest through a series of outposts into uncharted territory and a heart of darkness to confront an officer who has gone rogue with the mission of terminating him. We never quite get enough insight into Tommy Lee Jones and what he was doing for what I would have liked – especially when you compare these scenes to Martin Sheen’s confrontation with Marlon Brando at the end of Apocalypse Now – but the film does a fine and worthwhile job of telling the story.

What works particularly well is Brad Pitt’s performance. Much of the film is shot in whispered or hushed voiceovers as though Brad was still back filming Terrence Malick’s The Tree of Life (2011). It is one of the quietest performances I have ever seen Pitt give, all expressive silences and careful sublimation of self in favour of dedication to duty. Most of the dialogue he gets throughout seems to be recitation of bpm figures and calm disinterested discussions of his inner states to the psychological monitor. The only arc such a character can take is to slowly show the cracks appear in such control and the script proceeds to do exactly that in undeniably interesting ways. Of all the modern Real Space films, this is the one that seems to have the most personal journey at the heart of it.

(Winner in this site’s Top 10 Films of 2019 list. Nominee for Best Original Screenplay and Best Actor (Brad Pitt) at this site’s Best of 2019 Awards).