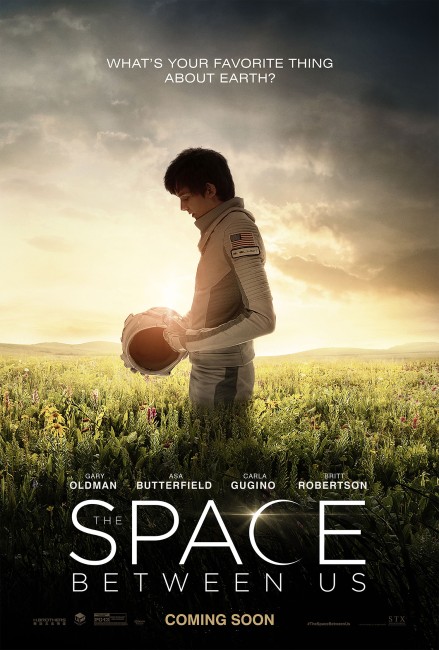 In 2018, the Magellan 61 expedition is launched in a partnership between NASA and the Genesis corporation with the goal of landing a team of astronauts on Mars and establishing a base to live there. However, the expedition commander Sarah Elliot is discovered to be pregnant part way through the journey. Genesis head Nathaniel Shepherd makes the decision to keep quiet about this lest his company’s share price plummet. Sarah then gives birth to a boy only to die during labour. Shepherd makes the decision that the existence of the Gardner be kept a secret. Sixteen years later and the boy Gardner is now a bright teenager, having been raised by fellow astronaut Kendra Wyndham. He has struck up an email relationship with Tulsa, a girl on Earth who is being shuffled through foster care, and maintains the pretence to her that he is in New York housebound with a medical condition. Kendra argues with Shepherd that Gardner should be allowed to come to Earth. He is given surgery and his bones strengthened with carbon nano-tubes so that they have the density to handle Earth gravity. Kendra then places him on a flight back to Earth without Shepherd’s knowledge. On Earth, Gardner marvels at the experience of ordinary things. He then breaks out of the NASA facility and sets out to find Tulsa. The two set out on a road trip to find Gardner’s father. However, they are pursued by Kendra and Shepherd, who are concerned that tests show that Gardner’s heart is unable to handle the strain of Earth gravity.

Ever since the enormous success of Alfonso Cuaron’s Gravity (2013), space movies have been big. Not to say that films set in outer space have been out of vogue but in specific Gravity created a new vogue for films set in near space in which the rigours of spaceflight were portrayed with scrupulously realistic regard. Gravity was followed by Ridley Scott’s The Martian (2015), which proved almost as big a success. The last couple of years have seen other near space-set works such as Europa Report (2013), Life (2017), Ad Astra (2019) and on the tv screen The Expanse (2016– ), The First (2018) and the National Geographic channel docudrama series Mars (2016-8), as well as the real-life based films Salyut 7 (2017) and First Man (2018). Amid the spate of near space movies, The Space Between Us could be considered the Young Adult version.

What impressed me about this is that Loeb has definitely done his scientific research. Both The Martian and Mars cheat when it comes to portraying gravity on Mars, having people moving about in Earth-like conditions. By contrast, this is the only one of the abovementioned space films to deal with the fact that people living in a lesser gravity environment would have substantial issues with bone density and weakened musculature when they come back down to Earth. Loeb not only writes this in as a plot element but makes it a crucial aspect of the story. I do like little touches that the film also saw fit to add – Asa Butterfield’s awkward walk as he becomes use to a 1g environment for the first time, or finding he can’t jump as high as he did on Mars. In this respect, the film gets full marks for doing its research.

On the other hand, there are quite a few bits that do leave you quibbling. Carla Gugino has spent sixteen years on Mars, so why does she not experience any problems adjusting for Earth gravity? The film seems to assume because she is not the one born on Mars that her muscles and bones would not atrophy after sixteen years in a low g environment. You could also point out that the film doesn’t take the logical implications of its drama to the full extent. Asa Butterfield is 6’1″, although Gardner could have been taller. Freed of growing in Earth gravity conditions, a child born on Mars would actually have no difficulty reaching well over two metres in height for the simple reason that there is not as much gravity pushing down on their spine and inhibiting growth.

Also, while it is said Asa Butterfield is having difficulty with an enlarged heart, why is he not getting fatigued and feeling out of breath from over-exertion all the time or starting to see black spots in front of his eyes from standing up too quickly? There would also be the problem of his having an insufficiently developed antibody system that would suddenly be being exposed to a whole lot of new Earth bacteria for the first time.

The big issue that also stands over the film is that the entire premise need never have happened. The most logical thing for Janet Montgomery to do at the outset, especially if there was a strong chance that she would have life-threatening complications during a pregnancy, would be for her to have a termination. In which case, the entire film would have been over after the first ten minutes. The reality is that abortion is such a hot button political issue in the US that even the consideration of such has been erased from the film. It would have been not terribly difficult to write in a section where Janet Montgomery is urged to go through with this for the sake of the mission and her health but decides not to on moral grounds but the film chooses to play it safe.

Although one of the biggest quibbles I had about the film was the part where Gary Oldman’s mission director makes the decision to cover up not only the commander’s pregnancy but her giving birth and the entire existence of a child born on Mars – all for the sake of fearing his corporate stock prices will go down if this were known! Part of you does a double take when he proposes this. Indeed, I could suggest another entire version of The Space Between Us that is not a romantic road movie but rather a conspiracy film where a kid born on Mars sets out to uncover why the circumstances of his mother’s death and his entire existence was erased from the official record and makes the eventual shock discovery that it was all for the sake of corporate stock value. And not only that but the CEO of the agency had a secret relationship with the mission commander (something that could well be construed as crossing the ethical lines of workplace conduct. I mean, Mission Controller knocks up mission commander, lies about her death and then covers up entire existence of the child for years afterwards).

If nothing else, the film makes an effective argument as to why private enterprise should be kept out of managing government services – I mean, the colonisation of an entire world has been placed in the hands of a company willing to create a massive conspiracy for the sake of its own share value. In any real world setting, Gary Oldman’s character would be prosecuted as soon as the existence of Asa Butterfield came out, which would probably only take until about the time that one of the other astronauts came back to Earth and casually opened their mouth after a couple of drinks.

The Space Between Us starts well. The space aspects held my attention with the script paying a reasonable attention to science The scenes showing Asa Butterfield experiencing Earth for the first time proved quite interesting. It is also hard to entirely dislike a mainstream American film that pays tribute to Wim Wenders’ Wings of Desire (1987). On the other hand, the second half of the film slides down into typical Young Adult territory. Here the film gives us the good old standby of the road movie/romance, which it plays by the book without ever doing anything remarkable. This becomes a disappointing ‘coming down to earth’ of the far more interesting science-fictional aspects of the story, which are abandoned after that point. Even then, you feel like Peter Chelsom is distracted from allowing the characters to emotionally connect by the need to constantly go for visual splendour with scenes of the biplane crossing the countryside – did the film really need to add a scene where it blew the plane up? – visits to a shaman and visions of a field of hot-air balloons.

British director Peter Chelsom had first appeared with the acclaimed Hear My Song (1991) and the black comedy Funny Bones (1995). His ventures into the American mainstream have included the disastrous flop of Town and Country (2001), the Richard Gere/Jennifer Lopez pairing Shall We Dance? (2004) and the commercial teenie hit of Hannah Montana: The Movie (2009), as well as one previous brush with fantasy in Serendipity (2001), a John Cusack-Kate Beckinsale romantic film set around the idea of fate.