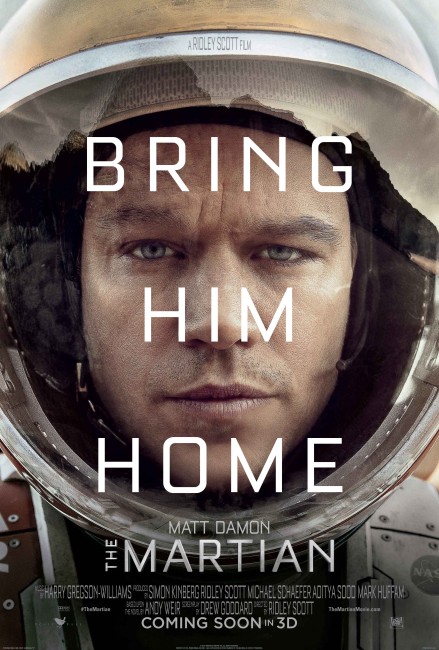 The crew of the Ares III expedition have landed on and are exploring Mars. When a dust storm suddenly hits, they are forced to abandon the mission and launch a return to Earth. Astronaut Mark Watney is blown away and thought to be dead. However, Watney survives and makes a return to the habitat. Realising that he is now the only person left alive on the entire planet, he decides he must do whatever he can to survive until the next Ares mission is launched in four years. Conserving the remaining supplies, he is able to use the astronauts’ waste to grow potatoes and provide food for himself. Eventually the fact that he is driving in the lander is picked up by satellite monitoring back on Earth. NASA is stuck with what to do and director Teddy Sanders decides to make an announcement to the world that Watney is alive but keep the news from the returning Ares crew. Watney is able to jury-rig the old Pathfinder probe to communicate back to Earth in a series of still photos and then improvise email contact. A probe is to be launched immediately to resupply his food but this is destroyed in a launchpad explosion. When all of Watney’s crops are destroyed in an explosive decompression, survival then seems impossible.

Mars has a long history in science-fiction cinema going back to at least A Message from Mars (1903). For the first half of the 20th Century, Mars had been a locale where explorers ventured in the likes of Heaven Ship (1918), Aelita (1924), Just Imagine (1930), Rocketship X-M (1950), Flight to Mars (1951), Conquest of Space (1955) and The Angry Red Planet (1959). More commonly, ever since H.G. Wells’ The War of the Worlds (1895), it was the setting out of which alien invaders would emerge as in films such as Invaders from Mars (1953), The War of the Worlds (1953), Devil Girl from Mars (1954), It! The Terror from Beyond Space (1958), The Day Mars Invaded Earth (1962) and Mars Needs Women (1966) and with more comical effect in My Favorite Martian (1963-6) and Santa Claus Conquers the Martians (1964). God even turned out to be living on Mars in Red Planet Mars (1952). The most thematically substantial Mars treatment up until the 1990s was the tv mini-series adaptation of The Martian Chronicles (1980), which unfortunately reduced Ray Bradbury’s beautiful and poetic stories to something dull and plodding. Of some note is Robinson Crusoe on Mars (1964), a well-worthwhile but even in its time scientifically unrealistic survivalist story, which is worth examining in that The Martian seems to have outrightly borrowed its basic premise of a lone astronaut trying to survive on the planet.

Since the 1990s, we have a concerted move towards a more scientifically accurate depiction of Mars on film. Around 2000, there was a big spate of serious scientifically-grounded Mars movies with Mission to Mars (2000), Red Planet (2000) and Ghosts to Mars (2001), which attempted to set the record straight for the 21st Century. Unfortunately, all of these were flops and were critically hated – although this author would beg consideration otherwise of the first two at least. The scientifically realistic Mars started to creep into other films of the era such as Mars (1996), Escape from Mars (1999) and The Last Days on Mars (2013). Even Steven Spielberg’s remake of War of the Worlds (2005) recognised the scientific reality enough so as to write reference to Mars out of the story altogether. Certainly, there have been works that draw on the old ‘sci-fi’ vision of Mars in Spaced Invaders (1990), Mars Attacks! (1996), Mars Needs Moms (2011) and John Carter (2012) but in these cases they are being made as parody or retro works and not intended as scientifically serious. The success of The Martian was in turn followed by a series of scientifically-rigorous Mars works with the likes of The Space Between Us (2017) and the National Geographic channel docudrama tv series Mars (2016-8) and the dramatic series The First (2018).

The film is adapted from The Martian (2014) by American author Andy Weir, a former computer programmer. Weir had the perfect childhood for a work like this – his father was a physicist and his mother an electrical engineer. Weir originally began publishing The Martian as a serial published free on his own website and at reader urging published the completed work via Kindle. What then transpired could be considered beyond every amateur writer’s wildest dream. After it became a best-seller on Kindle, the book was brought by a print publisher and within the space of a year was adapted to a major Hollywood movie.

The film version is adapted by Drew Goddard who started out as a scriptwriter on Joss Whedon’s tv series Buffy the Vampire Slayer (1997-2003) and Angel (1999-2004), becoming a story editor on the latter, before jumping ship to the J.J. Abrams camp to write and produce numerous episodes of Alias (2001-6) and Lost (2004-10). Goddard wrote the script for the Abrams’ produced Cloverfield (2008), while Whedon produced his directorial debut with the culty horror meta-fiction The Cabin in the Woods (2012). This has made Goddard into an in-demand scriptwriter and he has gone onto write the screenplay for World War Z (2013) and to create the tv series Daredevil (2015-8), one of the best of the modern Marvel Comics adapted works.

The Martian is surely this year’s Gravity (2013). Both are high-profile films that are based around Real Space (that is to say realistically scientifically grounded) as opposed to more fancifully science-fictional works. Both have very similar plots about one astronaut alone stranded in the vastness of space and having to devise ingenious engineering solutions to make their way home despite the herculean odds pitted against them. Both have also caught on with audiences in big ways and both received Academy Award nominations in the Best Picture, Visual Effects, Production Design and Sound Editing categories.

I have always been a sucker for hard-science based science-fiction – works like 2001: A Space Odyssey (1968), 2010 (1984), Mission to Mars, Gravity and Interstellar (2014), even a fact-based work like Apollo 13 (1995). The Martian is a film that feels like Andrew Weir had the time of his life sitting down with his slide rule and figuring out ingenious ways to hack Pathfinder, work out how many days someone could survive on supplies, calculate orbital velocities and docking trajectories and so on. In the oft-quoted line from the film, Matt Damon says he is going to “science the shit out of it” and that it precisely what the film proceeds to do with us. Your feeling is as though the production crew had researched the details down to the nth degree and the results show on screen. It is rare to see this sort of thing portrayed in a big Hollywood film – The Martian is a film where all of the triumphs on screen come not from brawn and muscle but from simple human ingenuity and a reliance on a knowledge of good science (and moreover, made digestible for a mass audience).

The accuracy of the science has been quibbled by other more knowledgeable about such matters than I – there is an excellent article on the subject from Mika McKinnon The Science of The Martian: The Good, The Bad and the Fascinating. The two major quibbles I picked up on are that there is no lower gravity on Mars – Mars gravity is about 38% of what it is on Earth. If you consider that gravity on the Moon is 16% of Earth, leading to the famous ‘moon walk’ effect, then the gravitic effect of being on the surface of Mars would surely be closer to the Moon than Earth standard. The film portrays the Ares crew in zero gravity so it is odd that they chose to show Matt Damon moving around on Mars as normal.

The other aspect is that Mars is a much smaller planet than Earth – the second smallest in the Solar System where its total area would only amount to all of the land surface on Earth crammed together minus the oceans, while it has an atmosphere that is about 100 times less dense than Earth. On flat land on the Earth, you usually get the effect of the horizon fading off into a hazy distance because of atmospheric density refracting the light (which is called Rayleigh Scattering), whereas on Mars, with less atmosphere and a smaller planet, the horizon would appear to be much closer to us than it would terrestrially and the view clearer and not as clouded by atmospheric density.

All of that aside, The Martian works magnificently. The dramatics of the film are pitched as a series of enormous emotional rollercoasters – Matt Damon getting the Pathfinder going and the tentative attempts to communicate; his attempts to chemically manufacture water; the crew of the Ares and their decision to go back and the maths of the slingshot; the eventual docking and Matt Damon getting to do his Iron Man scene, plus a good many others. It comes with big pits and troughs of triumph and despondence, all balanced with much audience-pleasing humour, and Ridley Scott rides them like the consummate pro he has been for 35+ years.

He also has a top-notch cast who play the humour it for all it is worth. When it comes to playing an ordinary Everyman, you would do no better than casting Matt Damon in the lead and he does a fantastic job. Scott fills even the small roles with fine actors, even if many of them are filling nothing-much parts. Of those that rise to the fore, one must mention Chiwetel Ejiofor who does the coolly intelligent mission controller to perfection. And not to forget, Jeff Daniels is back on screen and has one of the most solid acting roles he has had in a number of years as the NASA director.