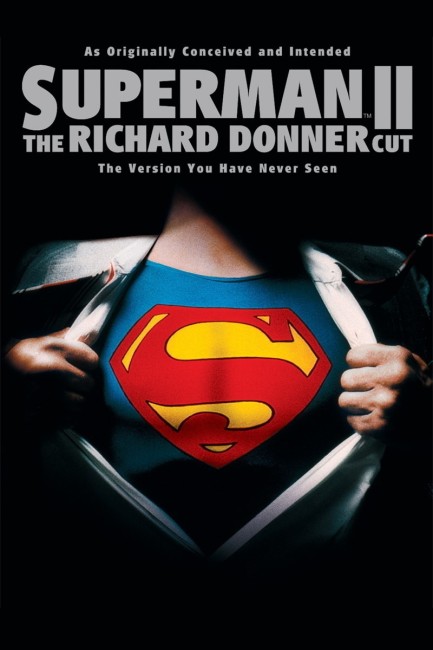 After Superman diverts Lex Luthor’s nuclear missile into orbit, this inadvertently breaks free General Zod, Ursa and Non, the three villains imprisoned in the Phantom Zone by his father Jor-el. Back at the Daily Planet, Lois Lane is suspicious of the likeness between Superman and Clark Kent. She becomes determined to prove that Clark is Superman, including throwing herself out a window, although he quickly uses his superpowers to save her without unmasking himself. Perry White assigns Lois and Clark to go to Niagara Falls posing as newlyweds to expose a honeymoon racket. There Lois succeeds in uncovering that Clark is Superman after firing a gun at him. He takes her away to the Fortress of Solitude. After wrestling within himself, he decides that he wants to forsake his superpowers for the sake of love. Jor-el permits him to do so, warning that there is no turning back. Meanwhile however, the Phantom Zone villains reach Earth and bring the country to its knees with their superpowers. With the aid of an escaped Lex Luthor, they come searching for Superman – however, having given up his powers, he cannot stand against them.

The story of the original cut of Superman II (1980) is one of legendary fallings out. Superman II was always intended as a direct sequel to Superman (1978) where both films were shot back-to-back and would be released one year apart. Superman I was subject to a great deal of in-fighting between director Richard Donner and father and son producers Alexander and Ilya Salkind. The production ran over-budget and dragged out for months, while there was a creative tug of war between Donner who wanted to treat the material seriously and the Salkinds who sought to play it in the campy vein of tv’s Batman (1966-8).

When it came to Superman II, which had been left uncompleted in order to make the first film’s Christmas 1978 worldwide premiere, the Salkinds made the decision to fire Donner and replace him with Richard Lester (both the Salkinds and Donner offer wildly different reasons for this) who reshot many scenes. It has always been a subject of debate how much of the finished 1980 film belonged to either Richard with percentages greatly varying. As is generally agreed, Donner shot all the scenes in the original print with Gene Hackman (who refused to return for reshoots in sympathy with Donner’s removal), the ones on the Moon, the ones with the bully in the diner and those with The President. Lester’s reshoots include the Eiffel Tower sequence, the scenes in the honeymoon suite, most of the scenes at the Daily Planet, those where the Phantom Zone villains overrun a small town and take on the US military and the villains’ battle with Superman over Metropolis. Most noticeable was the replacement of all of Marlon Brando’s scenes as Jor-el with Susannah York as his mother due to the fact that Brando had sued the Salkinds for unpaid fees.

In 2006, around the same time that Bryan Singer made his homage to the Christopher Reeve Superman films with Superman Returns (2006), Richard Donner was given the opportunity to revisit Superman II and restore his original vision. Donner had expressed a great deal of reluctance to ever do so. The opportunity for this came about with the discovery in 2001 of a massive amount of the original footage in film vaults in the UK. When the unused Brando footage was finally cleared by Brando’s estate to be used by Bryan Singer, the way was opened. Due to Donner’s reluctance to go back to the material, the new cut of the film was managed by Michael Thau, a former assistant director and editor on a number of several of Donner’s other films. This eventually impressed Donner sufficiently that he came on board. Donner had even patched up his differences with the Salkinds such that Ilya Salkind made an appearance at the premiere of the new cut (his father having died in the interim). Some new visual effects sequences were added, although in a way that matches the footage that was shot back in the day. It is estimated that what we see in The Richard Donner Cut is 83% of footage shot by Donner.

Superman II – listed as such on the film’s opening credits but referred to as Superman II: The Richard Donner Cut on the dvd cover and colloquially everywhere – re-establishes some of the major plot points that were dumped or rewritten by The Richard Lester Cut. Lester created an entire new plot that has Superman saving Lois from terrorists that have a nuclear bomb in the Eiffel Tower, which he disposes of by throwing into orbit to detonate harmlessly, only for the explosion to inadvertently end up releasing the Phantom Zone villains. Donner goes back to his original vision and directly ties this in with continuity from the first film where it is Superman redirecting the nuclear missile fired by Lex Luthor into orbit that frees the Phantom Zone villains.

The most fascinating of the new scenes is an entire new subplot about Lois’s obsession with proving that Superman and Clark Kent are one and the same after she idly doodles a hat and glasses over a picture of Superman in the newspaper. She then throws herself out the Daily Planet window, only for Clark to secretly save her by using his breath and heat-vision to let her fall into an awning and fruit stall. This is something that brings Superman II‘s Lois back far closer to her comic-book counterpart where she was constantly devising hare-brained schemes to expose the two and he was continually using his superpowers to outwit her without uncovering himself.

This leads to one of the finest new scenes – where Lois and Clark are in the honeymoon suite (a much more ordinary affair than Lester’s replacement scene) and she pulls a gun and shoots him, he isn’t hurt and is forced to reveal that he is Superman before she shows that the gun was only loaded with blanks. This scene was only a test one between Christopher Reeve and Margot Kidder, never intended to be in the final print but was included because the original scene was never shot. Despite the drop in quality, it contains some fantastic acting between Christopher Reeve and Margot Kidder, especially when Reeve makes his changes from Clark to Superman all through body posture without changing costume.

The finest part of the film is the magnificence of finally seeing Marlon Brando play out the scenes with Superman as his son. In The Richard Lester Cut, Brando’s scenes were simply reshot with Susannah York playing Superman’s mother due to the Salkinds wanting to avoid being further enmired in legal issues with Brando. This restores the mythic arc that was always intended between the two films and creates much deeper resonances. We now see what is essentially a prodigal son story about the son rebelling against the father and believing he knows best, before returning to find forgiveness in the father’s final sacrifice. Here we get the full grandeur of the scenes where Reeve stands up to argue against the sagacious hologram head of Brando. These scenes also come with the cuteness of seeing Margot Kidder’s Lois standing watching from the sideline dressed only in the blue Superman shirt. Brando’s inserts are edited in such a way that there is a fantastic momentary shot where he looks over in Kidder’s direction with a withering stare as though to say ‘You give up your superpowers for this?” The playing out of the full sequence where Superman later goes to beg for his powers back contains some of the greatest writing of the duology and the acting of Christopher Reeve in this scene is exceptional.

There are some pieces that still don’t work in either version. The climax with Superman tricking the villains about the power-stealing crystal seems a contrived set-up in both versions. Donner welcomely eliminates the entire amnesia-inducing kiss that ended The Richard Lester Cut and substitutes what he had originally intended as the ending of this film – the scenes that climaxed Superman I where Superman winds time backwards to reverse events. This is a fascinating, if radical, change that certainly works with far greater resonance than the magic kiss. That said, I hated the reversing the Earth gimmick in the first film and it works only marginally better here. If nothing else (and if you are prepared to buy the ridiculous physics it involves), it resolves the story without seeming too contrived in all the ways that the amnesia-inducing kiss didn’t. The real problems with the storyline is simply that is the script let the cat out of the bag regarding the comic-book’s perpetually unresolved Superman-Lois-Clark love triangle too early in the game and was stuck with trying to find a way to restore the status quo of the series’ sexual tension.

The original 1980 version of Superman II is a good film – one enjoyed it for what it was at the time without being fully aware of what it was intended to be. When The Richard Donner Cut is seen, it only shows the 1980 version up as a work of compromise that was crippled in so many critical areas. It becomes increasingly apparent in seeing The Richard Donner Cut that Richard’s Donner and Lester were very different directors and had entirely opposed approaches to Superman. Donner is an American and approached Superman as his country’s own mythology – he treats the comic-book and characters seriously (apart from the irritating comic portrayal of Luthor and his assistants); Lester is a British director who comes from a comedy background. Their approaches are best seen by looking at the films either made when they had complete creative control either side of Superman II – Richard Donner with Superman I and Richard Lester with Superman III (1983). Donner’s Superman is an epic work that treats Superman as an iconic Norman Rockwell-esque figure of Mom and Apple Pie Americana; Lester’s Superman III, arguably the worst of the series, reduces Superman to slapstick down around the level of tv’s Batman. These two approaches seemed to be at war throughout the cutting of Superman II. With The Richard Donner Cut, Donner simply removes all of Lester’s comedy additions – the Phantom Zone villains rearranging Mount Rushmore, people being blown along the streets while talking in phone boxes during the battle of Metropolis – and the effect is astonishing, we get a film that works seriously once again.

It is sad to trace the career arcs of some of the people involved with Superman II in between the two versions of the film. Most notably, two of the principal players had died by the time of The Richard Donner Cut – Marlon Brando in 2004 at the age of eighty and Christopher Reeve the same year following complications from the tragic horse-riding accident that left him paralysed. The new version opens with the apt tribute: “This picture is dedicated in living memory to Christopher Reeve without whom we would never have believed a man could fly.” Certainly, surviving players like Terence Stamp and Gene Hackman and to a lesser extent Ned Beatty are now regarded as elder statesmen of the screen acting profession. On the other hand, the Superman women fared less well. Margot Kidder never did much beyond the Superman films and The Amityville Horror (1979) – Lois Lane was a career peak and only a few years later she was making ends meet doing voiceover work in animation, while in the 1990s she was having high-profile mental health issues, including being found living on the streets at one point. Sarah Douglas’s career spiked as a result of Superman II and she went onto play in tv’s Falcon Crest (1981-90) and various B movie parts throughout the 90s. Valerie Perrine has continued to act in various roles, although not anything that has had a high profile.

Principal changes between the two versions:-