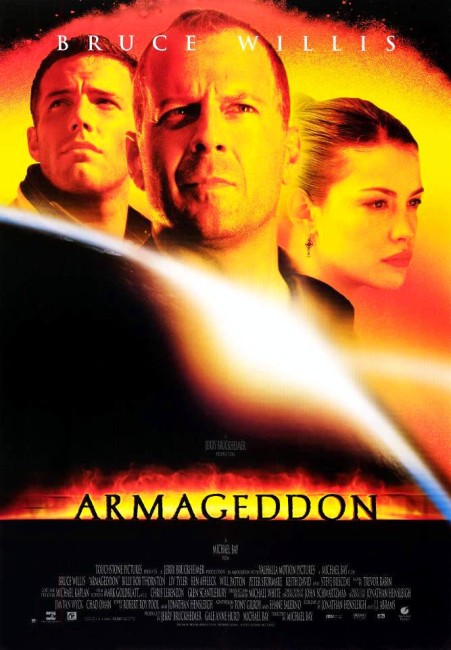 An asteroid the size of Texas is discovered nearing Earth, it capable of obliterating all life on the planet if it hits. NASA’s only hope to save the world is to recruit a team of hard-headed, anti-authoritarian oil riggers to go up into orbit, land on the asteroid and drill to its core to plant and detonate a nuclear weapon that will divert its path.

In the same way that 1997 was dominated by twin volcano disaster movies – Dante’s Peak (1997) and Volcano (1997) – so 1998 was dominated by twin astral body collision disaster movies with both Deep Impact (1998) and Armageddon vying for people’s attentions (and James Cameron reported to have been prepping his own asteroid film around the same time). Despite the commonality of themes, both are very different films – Deep Impact was a tepid soap opera melodrama about how people meet the end, while Armageddon is an out-and-out action film. A likely comparison might be between Saving Private Ryan (1998) and The Dirty Dozen (1967) – while both are essentially World War II mission movies, they are told with almost opposing emphases.

Armageddon comes with an absolute determination to be as BIG as it possibly can. It had a reported budget of $272 million which, if accurate, made it second only to Titanic (1997) in size. Perhaps the most amusing thing about the budget is that the film’s advertising campaign was almost as large as the production budget of the film itself. One certainly cannot deny that it was effective. One was bombarded by the film’s promotional campaign for months – giant digital displays in theatre foyers counting down the days, minutes and seconds until the film’s opening; posters featuring the faces of the principal characters plastered around the city – “He’s doing it for heroism”, “She’s doing it for love.” If only then there had been a film that had been worth such epical effort. Unlike Titanic, which confounded accusations of gross over-spending and turned around to become the success story of 1997, Armageddon emerges as only a spectacular monument to its own self-promotion and self-importance over the provision of anything of substance.

Director Michael Bay’s previous films – Bad Boys (1995) and The Rock (1996) (all under producer Jerry Bruckheimer) – were filled with gratuitous action sequences and Armageddon represents Michael Bay’s excesses at their most extravagantly empty-headed. [This is something that would reach its zenith with Michael Bay and Jerry Bruckheimer’s next collaboration, the monumentally over-budgeted and hideously self-important Pearl Harbor (2001)]. Armageddon is conceived around the provision of a series of dramatic peaks every ten minutes or so. All that Michael Bay seems capable of doing is substituting rapid editing, explosions, flashing lights, people yelling orders at each other all at once and a dramatically hyping musical score for any sense of drama. Each action sequence – the destruction of Mir, the landing, the liftoff, the buggy jump, the meteor shower – is so brainlessly empty in its absurdly over-hyped dramatic contrivations and so unbelievable as realistic drama that, contrary to what Bay is hoping to achieve, you sit allowing the sound and fury to wash over you without even the remotest connection to it.

The writing is absurdly one-dimensional – Steve Buscemi has no purpose in the film other than to crack wry one-liners and Liv Tyler is there for no other reason it seems than because the film needs a female lead. The nuclear detonation sequence offers up such old hat bomb detonation cliches as people yelling “The red or the blue wire?” and having the digital countdown stop three seconds before detonation. And despite the presence of at least three scientific advisers on the credits, the film is scientifically preposterous – space shuttles conduct aerial turns like jet fighters in a vacuum; atmospheric turbulence is encountered during a slingshot around The Moon; gravity is inexplicably on while aboard the asteroid and Mir but off back aboard the shuttles; and there is a really, really ridiculous sequence where people are able to turn an extra-vehicular buggy into a flying vehicle simply by turning its gravitic stabilizers off.

It has been a long time since one has seen a film that so relentlessly celebrates its own brainlessness. Armageddon wants to be a film about heroism. Heroism here is represented by Real Men. Their sweat, their stubble, their muscular brawn, the handsomeness of their faces is shot in emphatic highlight. It is clear that these are Real Men because they do Real Men things like ride bikes, fast cars and horses, gamble, have tattoos, party in stripper bars and above all never give up on a job. However, all the heroism comes absurdly posed. The sweat and the stubble on the heroes comes like it is shot for some fashion layout. Armageddon wants to convince us of some triumph of working class ordinariness but the sheer everyman quality of its heroes is shot in such a way that it attracts attention to the very artificiality of the attempt to do so.

What Armageddon ends up celebrating is not so much a sense of heroism as an adolescent anti-authoritarianism. Personally, I would be greatly concerned if the fate of the world rested on a group of roughnecks who, among other things, start firing at each other with shotguns when they are annoyed; someone who keeps protesting “She didn’t tell me her age, I swear”; and someone who explains their failure at psychological tests on the grounds they were dumped on their head as a child.

Everybody on the opposite side of the coin to the heroes is characterized as double-dealing military or ineffectual because they haven’t done any ‘real’ work. In its opening moments, the film celebrates a scene where Bruce Williss hero fires golfballs at a circling Greenpeace ship while one of his offsiders asks “What’s wrong with drilling for oil?” While one may not always agree with Greenpeace’s methodology, the film’s mindless celebration of environmental plundering on the grounds that it is a test of real men’s courage and the characterization of protesters as worthy of contempt is something that verges on intolerance. Similarly the film gets a big joke out of putting its heroes in a position when they can give the finger to the government and demand they never pay taxes again – but when you see that all the men seem to do with their money is to blow it gambling and in stripper bars, you are struck less by the film’s sense of heroic take-no-shit individualism than you are by its sense of macho self-centredness.

It doesn’t stop there. It is not merely the mindless machismo of the heroism that sticks in one’s craw, it is the mindless patriotism of the film too. One cannot remember seeing a film before that featured so many shots of people posing in front of the American flag. Like Independence Day (1996), Armageddon is less a film about combatting a world-threatening menace than it is a triumphal assertion of a belief in American identity and individuality. It is not merely a film about Real Men who never give up on a job going into space to save the world, it is about Real Men going to boldly assert their idea of what America is all about. All the heroic posing comes intercut with weightedly symbolic shots of the American flag and cutaways to the Iwo Jima statue and the plaques commemorating the sacrifices of the Apollo mission. The background is filled with incredibly sentimentalised and equally posed Norman Rockwell-esque shots of good ordinary folk gathered around barns listening to the radio or emerging from churches in slow motion. As a non-American, I find the cultural imperialism of this difficult to take. All of this in itself may have been slightly more palatable had not the heroic spirit of American independence that we are being asked to cheer on not been one that is so sophomoric and adolescent.