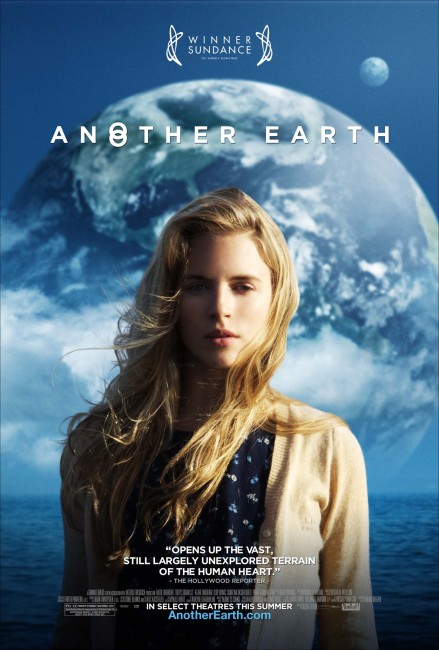 Rhoda Williams is released after four years in jail where she was convicted for a drunk driving incident in which she crashed into a car driven by music professor John Burroughs, killing his wife and son. She returns to her family home in New Haven, Connecticut and takes a job as a cleaner at a school. At the same time, there is intense fascination with a new planet that has appeared in the sky and appears to be a duplicate of the Earth. Rhoda enters a competition for seats aboard a commercial space mission being sent up to see what is there. Communication is finally established with Earth 2 and it is found that its people are mirror duplicates of the ones on Earth. Rhoda goes to John Burroughs’ home and pretends to offer a free trial cleaning service. As Burroughs accepts her and starts to come out of his detached shell, a closeness grows between the two of them and they eventually become lovers. However, she is unable to bring herself to tell him the truth about how she was responsible for killing his wife and son.

Another Earth made a strong showing on the indie movie and arthouse circuit in 2011. It received huge word of mouth after its premiere at the that year’s Sundance Film Festival where it was snapped up by Fox Searchlight Pictures and made the rounds of various film festivals. It was a debut feature for Mike Cahill who had previously worked as an editor and made the documentary Boxers and Ballerinas (2004). Cahill co-writes and produces with his leading lady Brit Marling, who gave an astonishing performance earlier that year in Sound of My Voice (2011), which she also wrote. Sound of My Voice and Another Earth has immediately placed her on the map as someone worth watching out for.

While Another Earth received glowing reviews from the mainstream critics, I felt less sure about it – the reason for this being that I approached it from the perspective of reviewing it as a science-fiction film whereas they clearly did not. I ultimately came out liking Another Earth – but as an indie film not as a science-fiction film. The work it most resembles is the Gerry Anderson production Doppelganger/Journey to the Far Side of the Sun (1969), which concerned astronauts on a mission to explore a planet on a counter-earth orbit who ended up finding a mirror-reversed version of Earth there. There have been other films on the topic too such as the tv movie The Stranger (1973). You might call Another Earth a case of Doppelganger having been reconceived as an indie mumblecore drama. There are also a surprising number of similarities to Lars von Trier’s Melancholia (2011), which came out a few months later, concerning an almost identical mystery planet that was hidden behind the sun and now emerges on a collision course with the Earth.

I thought the idea of a duplicate mirror Earth was an idiotic one in Doppelganger and it is no less daft a one when served up again in Another Earth. The starting point for the film was apparently when Mike Cahill and Brit Marling asked themselves what people would do if they encountered duplicates of themselves and came up the mirror Earth idea – in other words, the science-fiction element is being used to justify the idea they want to play with as opposed to being an idea they want to explore in itself. They seems to have conducted remarkably little research into what would happen if another Earth suddenly appeared in orbit.

In real world astrophysics, the orbiting body of The Moon controls Earth’s tidal patterns so the appearance of a huge new gravity source in the sky would cause colossal tidal waves and chaos with the weather, not to mention would also tug on the Earth’s crust creating massive earthquakes. The other thing is that Cahill and Marling seem to assume is that Earth 2 was just sitting there hidden by the sun and nobody noticed until it suddenly spontaneously decided to move closer to Earth. Sadly to report, that is not how astronomy works – a major new planet so close in the solar system would have been detected by now. Even if Earth 2 were not visible to the telescopic eye, its presence would be visible in respect to the gravity shadow it casts – this is how astronomers detect new moons in the solar system and planets in other star systems that are too small to be seen by the naked telescopic eye.

Furthermore, you also ask exactly what happened to the inhabitants when the other Earth started to move in its orbit – Earth swings between considerable extremes of heat and cold in just its minor axial title of 23.4 degrees or even between whether one is at the equatorial or polar regions; for a planet to vary from its natural trajectory and move nearer to Earth would surely have meant that the inhabitants were subject to temperatures that would have either have frozen them solid or cooked them alive due to their proximity to/distance from the sun.

Outside of that, I was frustrated by Another Earth‘s refusal to engage with its premise on a conceptual level. Indeed, you could almost entirely strip the idea of the mirror Earth out of the story and retain its focus on the redemption that Brit Marling seeks and the relationship that grows between her and William Mapother without changing any of that story. A more genre-identifying science-fiction film would have kicked off about the point of the radio transmission where the woman scientist discovers that she is talking to a duplicate of herself or when Brit Marling receives her acceptance letter and expanded out from there, taking us through the launch of the mission and what happened when people met their duplicates on Earth 2. For all Cahill and Marling’s claim that they set out to make a film about what happens when people meet themselves, this is oddly something that Another Earth fails to ever conceptually address. This is no more clearer than the twist ending where [PLOT SPOILERS] Brit Marling returns home to find her other self waiting there. This is precisely the point that another film might have suddenly got interesting but Another Earth abruptly and unsatisfyingly cuts to its credits, leaving us to contemplate what might happen next as though the filmmakers had no idea themselves.

On the other hand, I did like Another Earth in terms of the indie film it sets out to be. At its heart, it is a film about loneliness and the search for redemption for terrible crimes. Mike Cahill sets the film up and simply lets the two actors, Brit Marling and William Mapother, tell the story. As with most indie films, Cahill shoots using a digital camera, often leaving the ragged and handheld camerawork to stand as it is. Both the interiors of the houses and the wintry locations in effect serve as a bare stage for the two of the actors to play things out. And well played and often affecting this becomes. The drama has a low-key naturalism and lacks any kind of rehearsed falseness, all to modestly effective ends.

Brit Marling next went onto write and star in the environmental activism thriller The East (2013) and the enigmatic sf tv series The OA (2016-9). Mike Cahill subsequently returned with the science-fiction film I Origins (2014), which he wrote and directed solo but with Brit Marling playing the female lead.