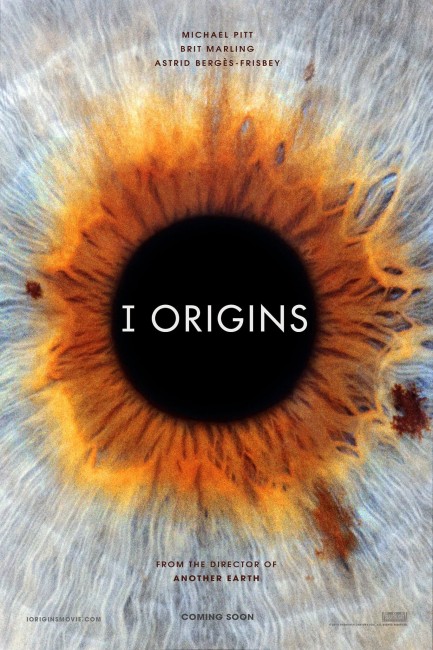 Ian Gray is a biochemist who is pursuing a research project dealing with the way that the eye evolved as a complex instrument. He also has a hobby of taking closeup photos of subjects– eyes. He meets one girl wearing a mask at a party and photographs her eyes before they have sex after but she disappears afterards. He becomes fascinated with the photograph of the girl’s irises and realises that they are the same as a model on a billboard. He tracks the girl down as Sofi Elizondo. The two fall in love and marry but Ian’s scientific reductionism is at odds with Sofi’s carefree belief in the spiritual. Sofi is then killed by a collapsing elevator. Six years later, Ian has remarried his lab assistant Karen and they give birth to a child Tobias. Tobias is placed through a strange series of tests by a psychologist that leads Ian to realise that Tobias has the same retinal pattern as a dead man from Missouri, even though retinas are supposed to be as unique as fingerprints. Checking through the international database on retinal patterns, Ian then makes the discovery that somewhere in India there is a girl that has the same retina as Sofi.

I Origins was the third film for US director Mike Cahill. Cahill had previously co-directed the documentary Boxers and Ballerinas (2004) with actress Brit Marling, and then Cahill had solo directed and the two of them wrote Another Earth (2011), an unusual science-fiction film about the appearance of a Counter Earth that became a Sundance breakout hit. I Origins is Cahill’s first work he has made creatively without Marling (although she appears on screen as Michael Pitt’s nerdily bespectacled lab assistant and later wife). On his own, Cahill subsequently went on to make the Virtual Reality film Bliss (2021).

Mike Cahill likes to make films that are decidedly different to the usual multiplex fare. For instance, the only other film of recent I can recall that was set around the scientific process – at least in a credible way rather than a few wave of the hand visits to a laboratory – was Errors of the Human Body (2012) and then it would be all the way back to The Andromeda Strain (1971). For that matter, I challenge you to name any other film that is based around characters obsessed with the patterns of the human iris. Here the scientific process is wound in and acts as an integral part of the film’s plot.

This does lead one to the essential problems with Mike Cahill’s films – he appropriates science and science-fictional ideas but the film are actually more relationship dramas. Another Earth took a science-fictional idea – a Counter Earth filled with doppelgangers – that collapsed into the scientifically absurd where clearly nobody had though to consult an astronomer who would have poured ridicule on the premise. Equally, you could have taken the central story about redemption out and made another film altogether for all the impact it had on the science-fiction element.

Similar things happen with I Origins. There is a science-fictional idea, yet much of the film is also a relationship drama. Certainly, you have to give Mike Cahill credit in that he gives the impression that he has gone and spent some time in a lab and done a good deal of research on the topics that he chooses as his subject matter. Much of this is set up so that the film can work (at least during its earlier relationship scenes between Michael Pitt and Astrid Berges-Frisbey) as a standard scientific reductionism vs mystical, New Age outlook debate. (Although you have to wonder how characters with such diametrically opposed viewpoints could possibly have any common ground – at least, you have to credit Cahill in that he gives the relationship such an energy that the two actors make it work). The problem is that though the film grounds much of itself in a rationalist scientific outlook, many of the deductions that Michael Pitt makes are non-rational ones where vital clues are obtained by such things as numerological significance or lookalike coincidences.

Most frustratingly [PLOT SPOIILERS], the film seems to be heading towards delving into a big mystery – people with the statistically impossible coincidence of identical iris patterns and then the discovery that they appear to also have identical memories, which by the end of the film gives the impression that we are talking about some type of reincarnation. Here I Origins frustrates immensely. The script builds up to an immensely intriguing idea and then just fades out at the point that Michael Pitt would seem to have confirmed that Kashish has the same memories as Astrid Berges-Frisbey.

It is an ending that leaves every audience frustrated as, just as in Another Earth, Cahill abruptly ends the film with the question of what happens next left unanswered. Just what is going on with the people being born with identical eye patterns? Who or what is the organisation that appears to be backing this and, as the post-credits sequence shows, seems to be manipulating things regarding the irises of numerous famous people of the 20th Century? It is a film that feels like it is missing an entire third act.

What must be commended is that Mike Cahill makes a good relationship film out of I Origins. The initial scenes between Michael Pitt and Astrid Berges-Frisbey comes with a sparkly charm – his encounter with her masked but for her eyes as she seduces him at a party; charming images like he walking up to her on a subway and putting his headphones on her and following her carrying his player as she leaves the carriage; or she walking up the steps of city hall in slow motion with the train of a wedding dress floating behind her. These are all the little pieces of mise-en-scene from a director with a poet’s eye.

Michael Pitt, who one has mostly seen playing troubled teenagers in films like Murder By Numbers (2002) and Funny Games US (2007), does a worthwhile job in a straight role. Brit Marling, who has proven a radiant joy in films like Sound of My Voice (2011) and the tv series The OA (2016-9), does her appealing thing playing nerdy and bespectacled as Pitt’s second wife.

(Nominee for Best Supporting Actress (Brit Marling) and Best Cinematography at this site’s Best of 2014 Awards).