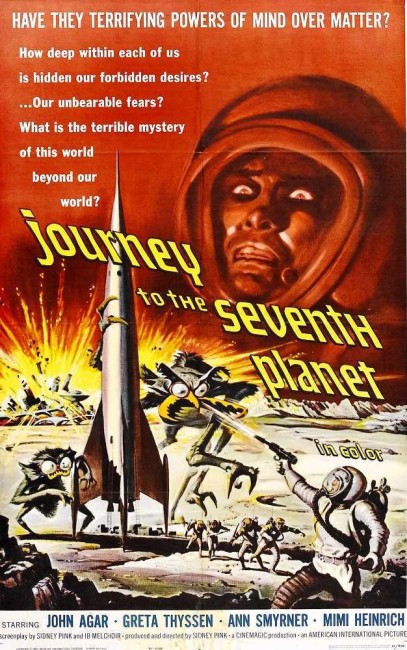 The rocketship Explorer 12 makes the first manned landing on Uranus. Upon landing, the crew find an arcane intelligence has created the hometown out their memories, as well as women that are an embodiment of the each crewmember’s perfect woman. Behind the illusions is a vast one-eyed brain that intends to destroy them – unless they can penetrate the illusions and destroy it first.

This cheapie came from Danish-born writer Ib Melchior and his American co-writer/director Sidney Pink. The two were also responsible for films like The Angry Red Planet (1959), Reptilicus (1961), Planet of the Vampires (1965) and Death Race 2000 (1975).

Pink and Melchior shot Journey to the Seventh Planet on the cheap in Sweden. And it certainly is cheap – the stop-motion animation for the one-eyed monster is atrocious, the actors never appear in the same shot as the giant creatures and the raygun beams have just been scratched onto the frame rather than animated.

Despite itself, Journey to the Seventh Planet succeeds in transcending its limitations by creating an air of intriguing mystery. Some of the images at the opening of the film are striking – the apple that has rotted in one astronaut’s hand after only a few minutes; the landscape that miraculously appears beyond the spaceship just before the astronauts look out; the great scene when commander Carl Ottosen reminisces about his childhood while in the background behind him first the tree he talks about, then a windmill comes into being; the landscape that proves to be wholly surface in depth with trees that are found to have no roots. The film remind strongly of the Ray Bradbury short story Mars is Heaven (1948), clumsily filmed as one of the segments of The Martian Chronicles (1980) and in turn looks forward to Solaris (1972) – but Sidney Pink does create a unique atmosphere of mystery and unease.

The story gets a bit ragged towards the end – allowing the astronauts such dodgy devices as being able to use materials taken out of the illusory village (hence illusory in themselves) to create the weapon needed to destroy the brain. It takes far too long (far longer than the audience needs) for the astronauts to work out that the women are illusions too.

The cast are an incredibly dull bunch with the crew written as the usual jocular bunch of GI’s that inhabit these stories – “I knew this UN biologist,” cracks John Agar at one point, “and boy, was she biological.”

The producing, directing and writing team of Ib Melchior and Sidney Pink, both in the USA and Sweden, combined on a number of other science-fiction films, including The Angry Red Planet (1959) and Reptilicus (1961). Melchior wrote and directed The Time Travelers (1964) and wrote Robinson Crusoe on Mars (1964), Planet of the Vampires (1965) and Death Race 2000 (1975).