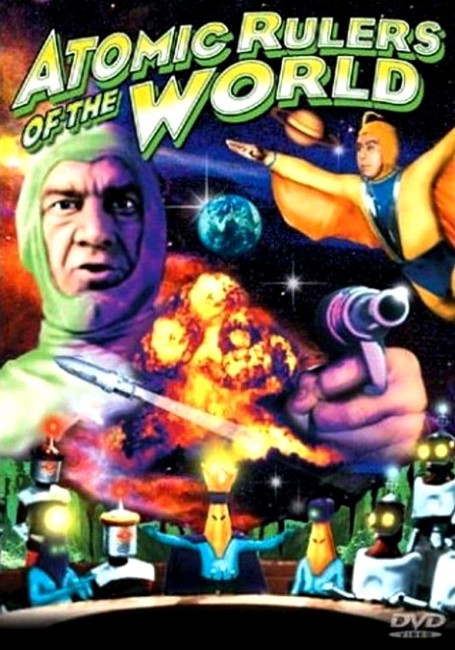 The rulers of the Emerald Planet feel threatened by Earth’s development of nuclear weapons and the danger the radiation poses to them. They create Starman, a superhero who can fly and is outfitted with a Globe Meter that can track the whereabouts of atomic weapons. Starman is despatched to Earth and arrives in Japan. There he intervenes to stop agents from the nation of Merapolia as they set about a nefarious scheme of starting a worldwide nuclear war.

The Super Giant films came out amidst a spate of cheap Japanese superhero films made during the 1950s that included the likes of Prince of Space (1959) and Invasion of the Neptune Men (1961), culminating in the tv series Ultraman (1966-7). These were very much superheroes that belonged to the era of the serials and George Reeves in The Adventures of Superman (1953-8), ones that came in baggy tights and with impoverished effects. (For an overview of the genre see Superhero Films). Here Starman/Super Giant even comes with a see-through tunic that gives him visible nipples right throughout the film.

Atomic Rulers had a ridiculous cheapness, although not unentertaingly so at times. Particularly amusing is the opening scenes on the Emerald Planet where we meet the gathered aliens that have starfish shapes, others that are designed akin to ambulatory milk cans or clanking robots with large glowing lightbulbs for eyes.

Much of the show is taken up with scenes of one of the foreign agents abducting a young boy for no clear reason and Starman flying off in search of him. The main plot involves a scheme by the agents of the fictional country of Merapolia to trigger a series of atomic bomb blasts around the world. The latter half of the film features lots of scenes with Starman beating up the foreign agents in some poorly choreographed fight scenes.

The science in the film is absurdly ill-informed (see Bad Science in Science Fiction Films). The opening narration talks about how radiation from atomic explosions is threatening to infect the rest of the universe. This may well be taking a leaf or two from The Day the Earth Stood Still (1951) but is an absurd notion. The most ridiculous scene is where Starman and heroine Reiko Sato are trapped in a room by the enemy agents who then throw an atomic bomb in with them. Moreover, Starman is able to protect Reiko by simply turning his back and shielding her from the atomic explosion, which merely blows a hole in the wall as opposed to razing the rest of the city.