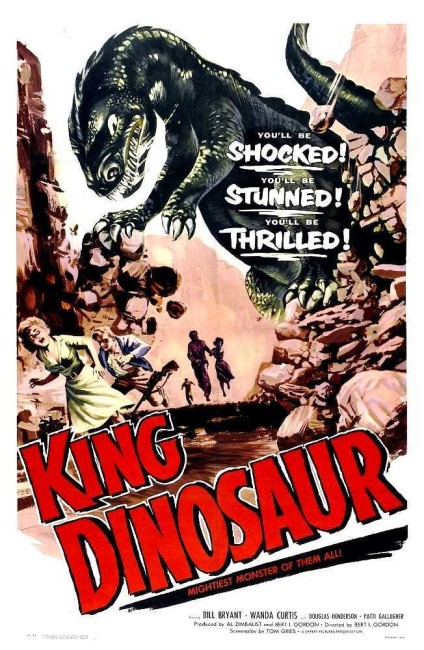 Another planet has entered the Solar System and gone into orbit near the Earth. It has been named Nova. The US launches a rocket expedition to explore the planet, which is crewed by four scientists, two men and two women. The rocket lands on Nova where the party discover an Earth-like planet populated by plentiful wildlife. As the group explore a volcanic island, they discover it to be inhabited by dinosaurs.

King Dinosaur was the first film directed by Bert I. Gordon. Over the next decade plus, Gordon went onto a career making a series of giant animal and people films with the likes of The Cyclops (1957), The Amazing Colossal Man (1957), Beginning of the End (1957), Attack of the Puppet People (1958) and Earth vs the Spider (1958). When the fad died out, Gordon dabbled in various other genres, although sporadically returned to the giant animal films in later years with the likes of Food of the Gods (1976) and Empire of the Ants (1977). (See below for Bert I. Gordon’s other genre films).

The title King Dinosaur gives you the impression that this is another Lost World film. (In all essential matters, it is a lost world film – just one where the usual lost island or land of dinosaurs is now an alien planet). In all probability though, the title is just Gordon or his distributors jumping aboard the popularity of The Beast from 20,000 Fathoms (1953), which came out two years earlier and inspired a spate of revived prehistoric wildlife films.

In all regards, King Dinosaur is just another of the Giant Animal films that Gordon preoccupied himself with throughout the decade. It features plentiful cheap-looking optically enlarged ants, armadillos and elephants. There are some dinosaur scenes that turn up around the 44 minute point (the film only has a runtime of 65 minutes). These consist of stock footage repurposed from One Million B.C. (1940), the prehistoric classic that lent its optically enlarged lizard scenes to dozens of other films.

King Dinosaur is also ostensibly a Space Exploration film. This was after all the great 1950s era of science-fiction films where the decade was filled with numerous examples of space journeys attempted and other worlds explored. A number of these films had the view (like this does) that the rest of the universe was hostile to human presence. King Dinosaur concerns a wandering rogue planet that had moved into Earth orbit, possibly borrowing its premise from the recent success of When Worlds Collide (1951).

As always, the film is sabotaged by Bert I. Gordon’s crappy opticals. Much of the lead-up to the launch consists of film footage recycled from the Space Program. These sequence works well but as soon as we see the rocketship entering the atmosphere of the planet, things start to look tatty. The rocket has clearly been optically superimposed against the sky and varies in perspective as it flies over the mountains, while the scenes where it comes in to land show it at one point simply double-exposed over the trees.

The film also shares the problem of many 1950s SF films that it has a banal lack of imagination about what explorers would find once they land on alien worlds. The alien planet turns out to be very much a copy of this one and has exactly the same fauna as Earth where we see the crew playing with various baby bears, otters and wrestling a rubber crocodile. This can be explained by the fact that most of the film was shot at Nature’s Haven, which would appear to be a wildlife park of the era.

The other thing that gets me is that once the explorers encounter the dinosaurs in the stock footage scenes (which are easily the most exciting in the film), they make the abrupt decision that the island is too hostile and to detonate a nuclear warhead (which appears to be standard equipment aboard this space mission) and blow the island up. This seems a bizarre kind of overreaction – sort of like being attacked by a bear in a forest and then deciding that the appropriate response is to burn the entire forest to the ground. Not to mention in this more environmentally aware era such an action elicits a response of horror at the wanton destruction of wildlife. Douglas Henderson stands back from the scene and comments: “We sure have done it. Brought civilisation to Planet Nova” where clearly there is the implicit idea that civilisation is represented by military might and weapons of mass destruction and that it is rightful in using these to put nature back into its place.