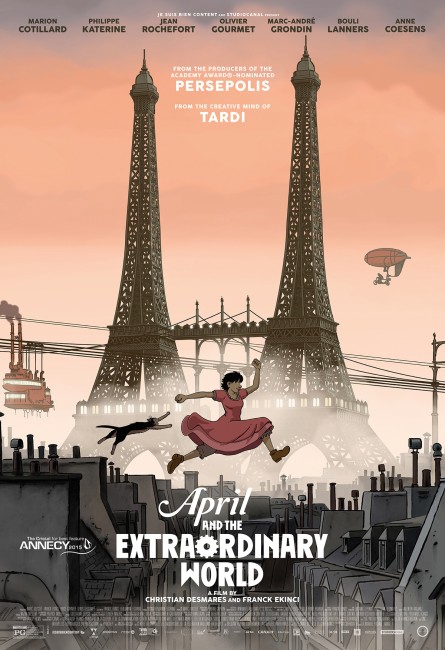 In 1870, the inventor Gustave Franklin tries to formulate The Ultimate Serum to create soldiers for Napoleon III. However, Napoleon is horrified by what he sees and shoots at the creatures, only to cause the laboratory to go up in an explosion. In 1931, the world has drastically changed from the path of history. Scientists have been going missing, meaning that gasoline and electricity have not been discovered, leading to a world that is powered by coal and is becoming badly over-polluted. Gustave’s son Prosper and his wife Annette are trying to complete the Ultimate Serum in secrecy when their laboratory is raided by the gendarmerie under command of the bumbling Inspector Gaspard Pizzoni. They are killed in an explosion not before they place the serum in the snowglobe of their young daughter April. Ten years later in 1941, April has grown up, along with her talking cat Darwin, and is experimenting to perfect the Serum. The disgraced Pizzoni wants to find the location of her hideout. He sends the former thief Julius to charm her and they get away as the gendarmerie raid, not before they are contacted by a talking rat that claims to be sent by her father and directs them to find her grandfather. In the midst of this, the snowglobe spills and the serum revives Darwin. In a furious chase, aided by Julius and her grandfather, April realises that her parents are still alive but are being held at a secret location by intelligent lizards who are forcing them to complete a scheme that will change the world.

April and the Extraordinary World – although the title that appears on screen in this version is April and the Twisted World, other versions have given it as April and the Rigged World, while the literal translation of the French comes as April and the False World – is a principally French animated film. The film’s publicity announces that it is based on a graphic novel by Jacques Tardi. Tardi is a celebrated French comic-book artist whose most famous works are probably the Adele Banc-Sec stories – see the film version The Extraordinary Adventures of Adele Blanc-Sec (2010).

I am not able to track down the title of the original Tardi graphic novel – it is equally possible that it hides under a different French name or has not been translated to English – while the credits for the film state that it is merely based on a graphic universe (by which one presumably means artwork) created by Tardi. It was the first film for both the co-directors Christian Desmares and Franck Ekinci. The script is co-written by graphic novelist Benjamin Legrand who wrote the comic-book that became the basis of the film Snowpiercer (2013).

The animation as we start watching is flat and often minimalist. Not that this is a particular problem; it is just that the modern Disney/Pixar/Dreamworks film has elevated the bar to the point where we expect something very different so that it feels like we are taking a few steps back here. Character faces are limited in expressions, while much of the early scenes seem to be given over to the slapstick pratfalls of a troupe of slapstick gendarmerie.

That said, any misgivings are silenced as soon as the film gets to 1931. The sense of a world – or more so a living and choking alternate Paris – is delivered with extraordinary texture and detailing. And then there is the magnificent vision of the overheard train line from Paris to Berlin amid a spectacularly staged sequence with various parties fighting around the outside of the massive gondola before it is blown up.

These initial scenes make the film seem like it is going to be a lightweight comic-book adventure in the light and fluffy vein of Adele Blanc-Sec or maybe a sex-reversed version of Tintin. Instead, we are plunged into a full-blooded alternate history in which most of Europe has not experienced any of the modern technological revolutions that came with gasoline and electricity and where, for once, we see quite accurately that this would have changed the shape of the modern world. (One should also keep watching right to the end where we get to see this world catching up with history and the delightful image of a Moon landing on a green Moon where the equivalent of Neil Armstrong is greeted by the cat).

The film’s design and detail – from the massive statue where April makes her hideout to journeys to the fairground and Pops’s hideout – are stunningly visual. A great part of the out and out enjoyment of the film is the wacky inventions and left field things that it keeps throwing in – remote controlled rats, the plane that Pops gets working, the arrival at the secret lair and the revelation of the armour-suited lizards who are running everything, the launch of a plant-covered rocket in the climactic scenes.

The most amusing of these inventions is the unveiling of Pops’s mobile house, which is capable of even becoming a submarine and a drilling machine, and the wonderfully nonchalant images of it making its way through the streets on legs or cruising down The Seine with its periscope up. The result amounts to one of the most outrightly enjoyable animated films one has sat through in some time.