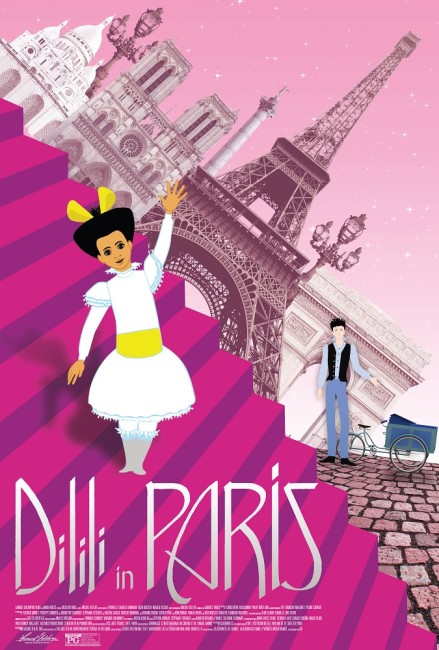 Paris around the turn of the 20th Century. Dilili is a young half-Kanak, half-French girl who has been brought to Paris as part of an exhibition of Kanak native culture. She is befriended by the courier Orel who takes her for a tour of the city in the basket of his package delivery bicycle. Dilili becomes fascinated with the disappearances of young girls who are being abducted off the streets by the secret society The Male Masters and sets out to solve the mystery. She and Orel visit numerous artists, performers and scientists of the day including Marie Curie, Louis Pasteur, Picasso, Renoir, Toulouse-Lautrec, Rodin, Colette, Sarah Bernhardt, Emma Calve, Marcel Proust, Gustav Eiffel and others in the search for clues. Dilili becomes a sensation in the newspapers when she helps foil one of the Male Masters’ schemes. She is then abducted and taken to the Masters’ lair in the sewers where the missing girls have been enslaved.

French animator Michel Ocelot had an internationally acclaimed hit with his first film Kirikou and the Sorceress (1998). Over the years, Ocelot has returned to tell further tales of Kirikou with Kirikou and the Wild Beasts (2005) and Kirikou and the Men and Women (2012). Elsewhere, Ocelot has also made the equally delightful animated likes of Princes and Princesses (1999), an anthology of potted fairytales, the Arabian fairytale Azur and Asmar (2006) and a further anthology Tales of the Night (2011), all animated in the same simple line-drawn two-dimensional style (although the quality of the art has become more sophisticated over the years).

With Dilili in Paris, Michel Ocelot has set out to pay tribute to France’s Belle Epoque, an unparalleled period of art, theatre and invention in France that lasted between 1880 and 1914. Ocelot has gone out and photographed the streets of Paris and interiors of still-existing classic buildings. From these, he has drawn a series of recreations of the buildings, salons, galleries and palaces of the era that are exquisite to behold.

The film has a plot whereby Dilili passes through the city in a fairly simple picaresque that requires her to visit various famous faces of the day to obtain clues or ask their aid in solving the mystery of the missing girls. Included are cameos from stage performers like Emma Calve, Sarah Bernhardt and Colette, artists like Pablo Picasso, Henri Toulouse-Lautrec, Pierre-Auguste Renoir, Camille Claudel, Edgar Degas, Claude Monet, Auguste Rodin, Amedeo Modigliani and Henry Matisse, the writers Marcel Proust and Gertrude Stein, scientists like Louis Pasteur and Marie Curie, the composer Claude Debussy, and Gustav Eiffel, the designer of the Eiffel Tower, among others.

Dilili is a Pollyanna character who is driven by her endless optimism and Can Do attitude. The quest plot develops a strong feminist theme once we meet the Male Masters (a Secret Society) and find they are misogynists rebelling against the growing power of women and have enslaved young girls to train them as subservient. When we finally meet the Masters, we find they make the abducted girls crawl on all fours like animals and act as human furniture.

Another particularly charming aspect of the film is its Steampunk design element. Michel Ocelot is careful to design creations that sit within a believable stretch of probability rather than the outrightly science-fictional. We see Emma Calve and later Orel puttering about in a mechanised swan boat; the Male Masters in their sleek shark-like train that runs through the sewers; and the construction of a giant pedal-powered airship to rescue the girls. Amidst this, Michel Ocelot creates some gorgeous images – Dilili riding a jaguar through Emma Calve’s parlour; the airship all lit up in lights coming in for landing alongside diners at the Eiffel Tower. It is really quite a beautiful film.