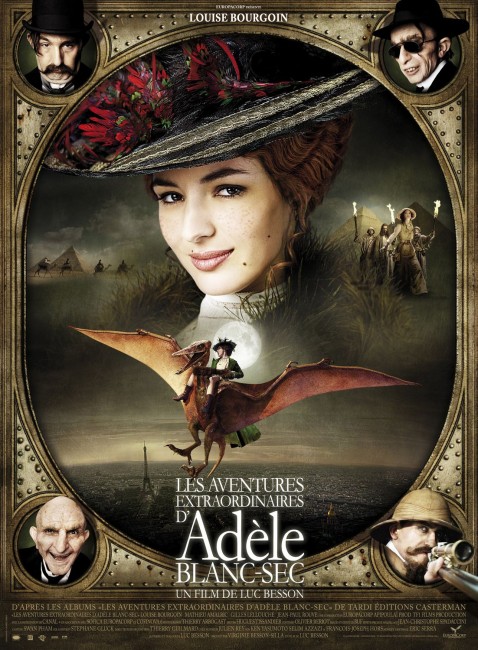 Paris, 1911. The eminent scientist Professor Marie-Joseph Esperandieu uses his mental powers to cause a long dead pterodactyl egg to hatch. The pterodactyl flies out into the streets of Paris, causing havoc. The police are assembled under the bumbling Inspector Albert Caponi to stop the threat of the pterodactyl. Meanwhile, the renowned writer-adventurer Adele Blanc-Sec ignores her publisher’s request and goes on an expedition to Egypt to find the tomb of Ramses II. She fights past treacherous bearers and her nemesis Professor Dieuleveult to escape from the tomb with what she believes is the mummy of the pharaoh’s physician Patmosis. She plans to use advanced Ancient Egyptian medical science to bring her sister Agathe back to life after she was fatally impaled through the head with a hatpin during a game of tennis with Adele. Back in Paris, Professor Esperandieu is arrested by Caponi after being found sheltering the pterodactyl in his apartment and is sentenced to be guillotined. Adele returns and sets about trying to free Professor Esperandieu so that he can revive the mummy to save her sister. However, this involves her having to locate and tame the pterodactyl.

Luc Besson could almost be a cult director. Besson arrived with great promise in the 1980s with arthouse works like Subway (1986) and The Big Blue (1988) and reached his peak in the 1990s with the breathtakingly stylish action hits of Nikita/La Femme Nikita (1990) and The Professional/Leon (1994). However, by the end of the decade that promise had transformed into bloated CGI fests like The Fifth Element (1997) and The Messenger: The Story of Joan of Arc (1999).

Into the 2000s, Luc Besson seems to have lost a good deal of direction. He has spent more time as a producer of other films, principally of the action variety, but also delving into animation and horror, even dance. (See below for a full list of Luc Besson’s other genre films). His output as a director during this period has been highly uneven – the angel fantasy Angel-A (2005) that not many people went to see, the weak trilogy of children’s films beginning with Arthur and the Invisibles (2006), and The Extraordinary Adventures of Adele Blanc-Sec here, which did few screenings outside of film festivals and French-language territories, before Besson left fantastical material for The Lady (2012), a biopic of Burmese political prisoner Aung Sang Suu Kyi.

It is a decade that has seen Luc Besson go from an immensely stylish and dynamic action director to one making bitsy children’s films and works that seem to be looking for a direction and leave you scratching your head unsure why he decided to take the project on. He did finally make an entertaining return to action movie form subsequent to this with Lucy (2014) and the astonishing Valerian and the City of a Thousand Planets (2017).

The film here is based on a series of comic-books The Extraordinary Adventures of Adele Blanc-Sec by Jacques Tardi. These appear to have been pitched as a female equivalent of Tintin and involve the title heroine in a series of globe-spanning fantastical adventures that take place in the early years of the 20th Century. The Adele Blanc-Sec adventures amount to several stories that have been serialised and released in seven books between 1976 and the present. I have not been able to track down English-translated copies of the books, but the story here would appear to be taken from two of the Adele Blanc-Sec adventures Adele and the Beast/Pterror Over Paris (1976) and Mummies on Parades (1978). Tardi’s artwork also formed the basis of the subsequent animated Steampunk adventure April and the Extraordinary World (2015).

With Adele Blanc-Sec, Luc Besson has taken obvious inspiration from the Indiana Jones films, in particular Raiders of the Lost Ark (1981), and attempted to create his own version. Louise Bourgoin’s venture into the pyramid is almost identically modelled on the entry into the Chacapayan tomb in the prologue to Raiders, albeit coming with far more low-key energy than Spielberg’s adrenaline charged thrills, while both films having almost identical scenes involving a villain who dresses in black and where Adele outruns a fireball instead of a boulder. The sequence ends with a silly scene with her riding down the rapids and a whirlpool in the sarcophagus to make an escape as the tomb goes up in an explosion.

The Extraordinary Adventures of Adele Blanc-Sec is appealingly light-hearted, although it is a film where Luc Besson often fails to always hit the right note. When it works at its best, Adele Blanc-Sec suggests a collision between the Indiana Jones films and the quirky whimsy of a film like Amelie (2001). The one scene where Luc Besson gets it right is the one where the mummy wakes up, apologies to Louise Bourgoin for breaking the glass, goes away to make a cup of tea and returns to thank her for her manners. Here is one scene where Besson gets the tone of gently nonchalant absurdity that the film is clearly aiming for down perfectly. Other scenes seem to only aim in this direction or hit a far more overstressed comic note. Louise Bourgoin plays with a feisty self-certainty – she has the perky confidence and unflappable air of classic girl reporter heroines like Brenda Starr and Lois Lane and emerges with great success.

The Extraordinary Adventures of Adele Blanc-Sec works amiably enough. The digital effects are variable and not always the most convincing but the film shines unevenly through for the most part. The major complaint might be that the show never builds to the big dramatic action set-piece that you expect it to – and as you certainly would get if Adele Blanc-Sec were a Hollywood film. Instead, all that we get is the image of the revived mummies passing out into the streets of Paris and shocking bystanders, whereupon this particular plot seems to come to an abrupt halt. The film then goes out on a decidedly downbeat coda where Adele is seen boarding the Titanic.

Luc Besson’s other genre films of genre note are the arty Le Dernier Combat (1983) set in a post-holocaust world where people have become mute; the space opera/action film The Fifth Element (1997); his fantastical interpretation of the historical story of Joan of Arc in The Messenger: The Story of Joan of Arc (1999); the eccentric angelic intervention film Angel-A (2005); Arthur and the Invisibles (2006), a part-live, part-animated film based on his own children’s books about adventures in a land of miniaturised people, and its sequels Arthur and the Revenge of Maltazard (2009) and Arthur and the Two Worlds War (2010); Lucy (2014) in which Scarlett Johansson gains enormously expanded mental abilities; and the space opera Valerian and the City of a Thousand Planets (2017). Besson also produced and wrote The Dancer (2000) about a mute dancer who gains expression through a unique sound invention; produced the mystical quasi-sf Quebecois film Chaos and Desire (2002): wrote and produced the End Times serial killer thriller Crimson Rivers II: Angels of the Apocalypse (2003); produced the serial killer film Tristan (2003); produced and wrote the futuristic action film Banlieue 13 (2004); produced the serial killer thriller Tell No One (2006); produced the Backwoods Brutality film Frontier(s) (2007); produced the videogame adaptation Hitman (2007); produced the horror film The Secret (2007); produced and wrote Banlieue 13: Ultimatum (2009); produced the animated A Monster in Paris (2011); produced the orbiting prison film Lockout (2012); wrote/produced the English-language Banlieue 13 remake Brick Mansions (2014); and wrote/produced The Warriors Gate (2016) in which a videogamer is transported to Ancient China.