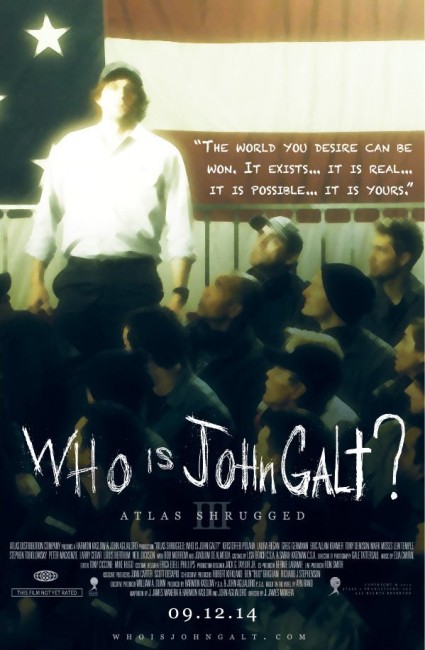 Dagny Taggart comes around after the plane crash to find she is in John Galt’s secret enclave The Gulch, which is made invisible to the rest of the world by a forcefield. Galt introduces her to his perfect society – one inhabited by all those who disappeared to come somewhere where they are free to be creative individuals without constraint by government regulation or control of another. Galt offers Dagny the opportunity to be part of this world. The two become lovers. However, when Dagny learns of the government’s plans to nationalise railroads, she returns to take the helm of Taggart Transcontinental. This puts her in opposition to the government’s desire to meddle and make things equal for all. Meanwhile, Galt emerges into the outside world and hijacks the airwaves to give a speech. This starts a revolution with people standing up for liberty and not being controlled by government but also brings the security forces after him.

Atlas Shrugged III: Who is John Galt? was the third of the films adapted from Ayn Rand’s influential book (and science-fiction work) Atlas Shrugged (1957). The book has been embraced by libertarians for its impassioned argument in favour of radical individualism, of unrestrained capitalism as the arbiter of good and railing against the evils of government control.

Rather laughably, despite Ayn Rand’s view that the marketplace is the ultimate arbiter, Atlas Shrugged III was made despite all the other films being commercial flops. Moreover, in ludicrous contradiction of Ayn Rand’s despising of giving charity to anybody, funding for Atlas Shrugged III: Who is John Galt? was raised by a Kickstarter campaign – a list of the contributors can be viewed on the end credits – along with the volunteer contributions of an organisation called Students for Liberty.

Atlas Shrugged III comes with a script that feels less like a dramatic screenplay than a series of speeches and digs that Aglialoro and co want to make about the evils of socialism and government regulation of business. These and some of the suggestions made by the narration are often hilarious – we go from a flashback where John Galt stands up against the introduction of the notion that every worker is paid according to their need (like that would ever have a shot of occurring in any real world corporate setting) to the directly implied suggestion that the actions of a single company have led to the economic collapse of the United States through a lack of supplies and strangling regulations.

In The Gulch, doctor Scott Klace unveils a diagnostic tricorder device he has invented accompanied by comments like: “Every doctor could have one. It’s amazing what can be accomplished without red tape.” Or where the narrator intones: “Several people at the Rearden Mill died defending against government sponsored union thugs.” Or even more hilariously when the narrator intones: “Once a monument to American industry, the Taggart Bridge has finally surrendered to regulation,” whereupon we are shown a matte of a bridge that has collapsed in the middle, creating a bizarre non-sequitir leap that implies business regulation leads directly to the abandonment of infrastructure. This is punctuated by talking heads clips from conservative commentators such as Shane Hannity, Ron Paul and Glenn Beck, which more than clearly signals that the Atlas Shrugged series’ casts its lot in with the bizarre alternate reality that Fox News and its slavish devotees exist in.

Another plot point hangs on the moral urgency of Dagny, after regaining control of the railway, defying government decree and reopening the lines so as to deliver food to starving families. Part of this causes one to do a double take and wonder to what extent the film is operating with a blindspot the size of a transcontinental railroad. Ayn Rand despised any form of altruism, charity or unearned hand-outs. Starving families are not exactly known for having money to pay for food (otherwise they surely wouldn’t starving, right?) so the film seems to imply – all for the sake of creating a straw moral outrage about the ruthlessness of a socialist government – that the sole reason Dagny defies government interference is to go on a mercy mission and do the one thing that Rand loathed, which is to deliver supplies of food to the needy!!! You cannot help but think if the starving families announced “Thanks for bringing the supplies but we have no money to pay for them,” then according to Rand-ian principles, the logical solution would have been to allow those unable to pay their way to simply starve, which seems a lot more callous than the bumblingly inefficient straw government the film creates.

The other piece of bizarre ridiculousness is John Galt’s speech that he hijacks the airwaves to deliver – which runs somewhat shorter and far less impassioned than the 70 pages Ayn Rand had him deliver in the book – where in any real world setting, networks would simply cut the transmission. Either that or the entire speech would be reduced to soundbites on the nightly news or subject to every blogger and pundit from differing political spectrums immediately debating the pros, cons and implications of what was said.

The biggest fantasy that the entirety of Atlas Shrugged buys into though is the one that successful business owners who don’t feel appreciated enough would just get up, abandon their businesses and go into hiding. Like any real world business magnate would willingly abandon what they have built from scratch, not to mention their life of unfettered wealth and privilege, personal Lear Jets, holiday homes in the Caribbean, lackeys at their bidding and so on to go and live in a collective just so they can innovate with their own hands to their hearts’ content. Not to mention Rand’s certainty that the world would be left stunned by their absence and at a loss of what to do or how to cope.

Ayn Rand was a writer, a profession where it is quite reasonable to be the sole creator and controller of your ideas and fiercely resentful of those trying to either censor, exploit or take these away from her. However, she makes the mistaken assumption that every corporation operates on similar lines and is headed by some brilliant inventor and genius who had built it from the ground personally – she seemed oblivious to the fact that corporations exist not as one individual but have a pyramidal structure of workers and shareholders. In the real world, while there are certainly owner-created corporations, most of these change their CEOs with regularity and the original creator of the company may have died/sold out their interest decades ago and the role of the CEO been inherited by someone whose only expertise is business management, nothing to do with creating the product the company sells. In reality, if a CEO went AWOL, the most likely result would be a very different kind of shrug than the title suggests – where they would be instantly replaced by the next person down the boardroom ladder.

The end of the story is one where Rand seems so contemptuous of the unearned taking any portion of the pie that she has fiercely won for herself that she is prepared to allow the corrupt socialist-styled government to fall down. You wonder, did Rand really hate the idea of fairness, freeloaders and those less determined that she was prepared to go to the extent of allowing the entire world to collapse (albeit with the blithe assurance that the mighty John Galt would rebuild it along the lines of a world where only those who earned their way had a part in it)? Despite what she might think, the scenario she posits seems unlikely. Emergency services workers and most levels of government-provided healthcare and municipal support in the real world are individuals who, though they might not be great industry leaders and innovators, are perfectly competent at doing their job and would simply continue to keep the system going.

Laura Regan inherits the role of Dagny this time and gives an anonymous performance. You keep wondering where the great intellectual fire and entrepreneurial spirit that Dagny is supposed to embody has gone in Regan’s bland delivery. You end up laughing at finally getting to meet John Galt in the person of Kristoffer Polaha. He seems the ideal casting for a stocky handsome truck driver but hardly fills the shoes of Ayn Rand’s revolutionary leader and towering powerhouse of idealistic fervour.

The other funny aspect is how as soon as Dagny meets John Galt, the great romance that has been built up with Hank Rearden over the last two films is suddenly tossed aside and she leaps into bed with Galt. Indeed, Hank Rearden is a now such a thing of the past that he doesn’t even feature in the film – despite being cast with the moderately well-known name of Rob Morrow, all that we see of Hank here is a couple of still shots. The Dagny-Galt romance is rather laughable – even though she is dealing with an emergency regarding getting the railway line back running again, she still manages to find time in the midst of it to whisk away to a backroom and have soap opera sex with Kristoffer Polaha.