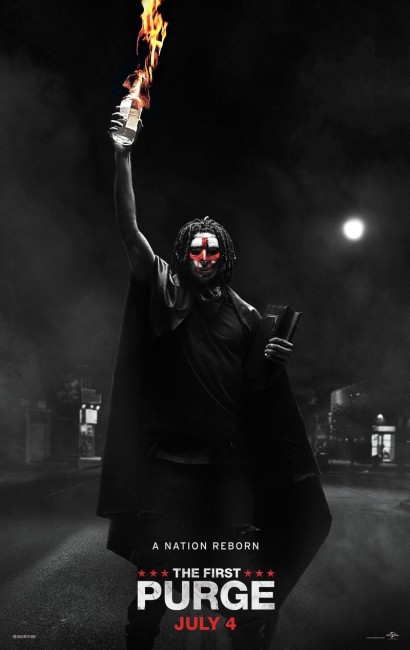 The New Founding Father have become the government of the United States. They are promoting the idea of The Purge where all crime will become legal for one night. Scientists are trying out a pilot scheme in a predominantly Black neighbourhood on Staten Island where the residents are offered cash incentives to participate. As the hour of The Purge nears, neighbourhood drug dealer Dmitri gathers his crew to hold out. There are protests against The Purge led by Dmitri’s ex Nya. Nya’s younger brother Isaiah intends to use the opportunity of The Purge to kill a crazy known as Skeletor who wounded him. As the hour arrives, all hell and anarchy break loose. This is something being encouraged by the project’s lead scientist who has hired mercenaries to go into the zone and kill people. In the midst of this, the various parties are forced together to survive.

The Purge (2013) was a popular hit for director James DeMonaco, depicting a near future society where all crime becomes legal for one night only. Production company Blumhouse have never had a hit they haven’t found the ability to spin out as a sequel and DeMonaco returned to make The Purge: Anarchy (2014) and The Purge: Election Year (2016), followed by his writing The First Purge here. Two months after this film came out, there was also the tv series The Purge (2018-9) and was followed by another sequel The Forever Purge (2021).

The Purge is the case of a series that had one (not very) original idea and has subsequently milked that for all it could by repeating the same thing every time – the rule of law is lifted, people go crazy, a crosscut of characters try to survive in the midst of the anarchy. We received a scanty but hardly credible political scenario for this in the first film but the subsequent entries failed to do anything to explore this. With The First Purge, more it would seem out of a desire to introduce some novelty into the series than anything else, James DeMonaco has gone back to tell an origin story of how The Purge came into being.

This seemed potentially interesting to me in that the previous films left a bunch of questions about the set-up (not that DeMonaco’s writing gave me any hopes that we would get any kind of in-depth or even plausible answers). In the film, DeMonaco’s origin story goes back to not long after the New Founding Fathers took over the US and are about to introduce a trial run for the first Purge Night. (Interestingly, The First Purge comes out four years after the first film tells us that the election occurred that brought the New Founding Fathers to power).

Far more so than all the other films, The First Purge becomes a highly politicised sequel. The film’s opening montage places the establishment of the New Founding Fathers (who are portrayed as an extreme Right political group even if the film never specifically says so – they are even supported by the NRA we are told) against a montage of video clips showing recent anti-Nazi and Confederate flag protests. In other words, it is The Purge series planted specifically into the era of MAGA and Donald Trump.

The other even more radical politicisation of the series is to drag it into the era of Black Lives Matter. Perhaps cannily mindful of the runaway success that came about when Blumhouse backed Jordan Peele with Get Out (2017) and how much that film’s revamp of The Stepford Wives (1975) across racial lines resonated with audiences, Blumhouse have handed the reins of the series over to African-American filmmaker Gerard McMurray with James DeMonaco stepping back to write the script and into an executive producer role. And oh boy does McMurray take the opportunity to get political.

The results are quite stark. The other Purge films featured mostly whitebread faces in the midst of a Purge Night. By contrast, The First Purge takes place in a poor Staten Island community (an area where James DeMonaco grew up) and the cast line-up is almost entirely Black faces with one or two Latinos in the mix as well. (This comes in contrast to real-life where the ethnic mix of Staten Island is 75.7% white, 17.3% Latino and only 10.5% Black). There are a handful of white faces throughout but it is notable that these are only figures on the other side of the fence – those running the experiment and the new President.

What we have feels like less of a Purge film than a ‘hood drama like New Jack City (1992) and Menace II Society (1993). The heroes throughout are the decent honourable drug dealer, his social activist ex and the wet-behind-the-ears teenager who is using the opportunity of the Purge to kill the crazy who dissed him while he was trying to sell drugs. The morality of the film is all over the map, especially when it turns the drug dealer into the hero of the show. Indeed, the film sets up an interesting set of politicised dichotomies – the Staten Island community is seen as peaceful and it is only the machinations of the experimenters in paying people to stay and participate that causes the situation to blow up. The introduction of a squad of armed soldiers creates incendiary images that resonate with those of the police moving in on the protestors at Ferguson with para-military riot gear. The narrative that McMurray runs through this is of a peaceable Black community that is suddenly sparked into chaos and violence by the confluence of the arrival of armed police and cynical manipulation via social media that turns the situation into a powder keg.

It’s a focus that definitely alters the series – the other films were about middle-class and poor people at siege, whereas this becomes about a Black community being manipulated by white social forces. I’d also go so far as to say that Gerard McMurray comes across as a much better director than James DeMonaco. DeMonaco’s work had a workmanlike efficiency, they were commercial moves but there are never anything that you remember afterwards. On the other hand, McMurray directs the action with a gritty edge that makes the siege scenes at the climax work well. I could easily see him going on to a career as a director of tough urban action thrillers.