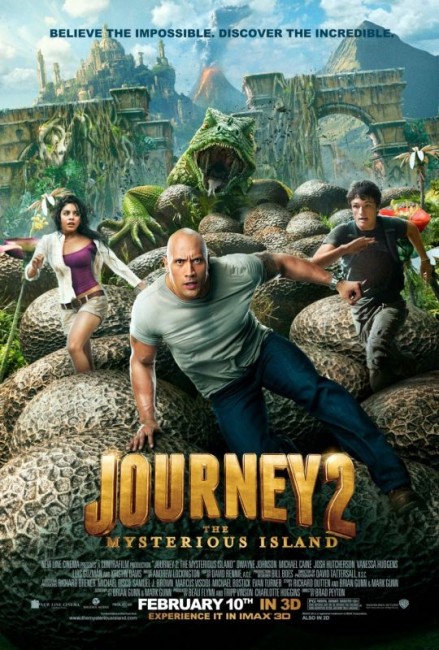 In Dayton, Ohio, Sean Anderson is busted by police after trying to break into a radio station. His stepfather Hank Parsons intervenes to get him out of trouble. Hank takes an interest in what Sean was trying to do – obtain a stronger copy of a radio signal that contains the names of character out of Jules Verne’s books. Hank is able to decipher the signal and realises that it refers to the maps in Jules Verne’s ‘The Mysterious Island’, Jonathan Swift’s ‘Gulliver’s Travels’ and Robert Louis Stevenson’s ‘Treasure Island’. When overlaid, the maps from each of the three books give longitude and latitude to an island in the Pacific. Sean wants to go there, believing that this is Verne’s Mysterious Island and that the radio signal was sent by his missing grandfather. Hank buys them tickets to Palau where they charter the shabby helicopter of Gabato to fly them to the coordinates – an area of the ocean where no one else will take them. Sean is attracted to Gabato’s daughter Kailani. They pass through a storm and crash, coming around to find themselves on the Mysterious Island where dinosaurs roam and bird and insect life exists at giant size. They encounter Sean’s grandfather who has made a treehouse and all the amenities of life for himself on the island. Hank then realises that the Mysterious Island, which is also the location of Atlantis, is about to sink beneath the ocean again in a volcanic eruption in a couple of days. Their only means of escape is to make a perilous journey across the middle of the island to find the location of Captain Nemo’s submarine The Nautilus.

Journey 2: The Mysterious Island is a sequel to Journey to the Center of the Earth 3D (2008) from Walden Media. Journey to the Center of the Earth 3D was a modest success in theatres, it being the first non-animated dramatic film to be released in the modern 3D fad and in fact predated the massive success of Avatar (2009), after which box-office interest in 3D went stratospheric. With Journey 2: The Mysterious Island, Walden Media adapt a further Jules Verne novel Mysterious Island (1874) as a sequel and feature a return performance from Josh Hutcherson.

The premise that Journey to the Center of the Earth 3D was founded on was of present-day adventurers following the clues left in Jules Verne’s novel to find the opening that led to the centre of the Earth. Journey 2: The Mysterious Island tries to do the same thing – this time having explorers following clues to find the location of Jules Verne’s Mysterious Island. Though the film makes a great deal out of claiming to be following the text of the Verne book closely, one wonders if any of the three screenwriters have actually read the book. The fact is that if they had followed the book in any detail (as the film tries to give the impression it is doing), they would realise that Jules Verne located his Mysterious Island east of New Zealand whereas the film has it located a helicopter flight from Palau (which is near the Philippines, not an outpost of Hawaii as the film seems to assume) – in real world geography, the two locations are separated by some 4000 miles of ocean.

Jules Verne’s Mysterious Island is a desert island survival adventure. It concerns five prisoners who make an escape from Confederate custody by balloon during the American Civil War. The balloon is caught in a storm and they are washed up on the island. The bulk of the story concerns their efforts to build the necessities of life from scratch. Towards the end of the book, they realise that they have been aided by a mysterious benefactor upon several occasions who turns out to be none other than Captain Nemo, the anti-hero of Verne’s Twenty Thousand Leagues Under the Sea (1870) who has survived his apparent death at the end of that book.

If anything, Journey 2: The Mysterious Island could lay claim to being based far more on the 1961 Mysterious Island than it ever could the Jules Verne novel. Especially irritating is the fact that the film makes wholly specious claims to be following directions laid down in Jules Verne’s text – it even quotes chapters at various points. I counted maybe about three occasions where Journey 2: The Mysterious Island coincided with what Jules Verne laid down in Mysterious Island. There is the scene where the explorers pass through the eye of the storm in a helicopter, which works as a passable updating of the scene with the escaped prisoners in the balloon being stranded by the storm in the Verne text. There is no Captain Nemo here, although we do get to see his skeleton and the Nautilus is pressed into service at the climax. Oh and there is also the exploding volcano climax that destroys the island (although, as part of the exceedingly dodgy geology that the film operates by, this is an island that has the habit of periodically sinking and rising from the ocean). One surprise is that the film does include Verne’s expansion of the background of Captain Nemo in Mysterious Island, revealing him to in fact be Prince Dakkar and of Indian origin.

There endeth resemblances. Following in the footsteps of the Ray Harryhausen film, Journey 2: The Mysterious Island adds a menagerie of giant-sized insects, birds and animals, as well as a horde of miniaturised elephants. Surprisingly, there is no rationale offered for why they are giant-sized excepting a line from Josh Hutcherson who offers the incredibly vague justification “In Gulliver’s Travels (1726), what is big is small and what is small is big.” There is a nod to the Robinson Crusoe fantasy of desert island survival that the Verne novel operated on when we get to Michael Caine’s treehut, although when we have him demonstrating a from-scratch blender, referring to a window out on an active volcano as his high-def tv and the like, we can see that we are clearly in a farcical parody of desert island survival. The film also makes the claim that Jules Verne wrote about Atlantis – which is not true – and that the Mysterious Island is the location (even though to all accounts the theoretical location of Atlantis was in the Atlantic ocean, not the middle of the Pacific).

However, the single most absurd notion in the entire script – which incidentally was written by the brother and cousin of James Gunn, who would later go on to write the anti-superhero film Brightburn (2019) – is the premise. (We shall leave alone the wave of the wand that allows Dwayne Johnson to go from a single page of character names taken from Jules Verne to somehow decipher that these are referring to actual words that spell out a lexical substitution code denoting a cryptic series of directions). There is the utterly bizarre idea that the way to the Mysterious Island can be found by piecing together the maps included in Jonathan Swift’s Gulliver’s Travels (1726), Robert Louis Stevenson’s Treasure Island (1883) and Verne’s Mysterious Island. When overlaid on a transparency, the maps of all three supposedly combine to reveal the location of the real Mysterious Island. Now, let us for a moment examine how this could plausibly come about. It would require three different writers each writing books that were published over 150 years apart in two different countries and two different languages to somehow come together in a conspiracy to each hide a third of the map to the island in the frontispiece of their book. Moreover, that modern publishers of these three books would be suitably coordinated to publish each of these maps as originally drawn and not alter the sizing or original sketch in any way – because surely if they did, the map that Dwayne Johnson pieces together would not work at all.

We can leave aside other minor details from the two books – such as that Robert Louis Stevenson located Treasure Island in the Caribbean, some 10,000 miles and half a world away from Palau, while Gulliver’s Travels is not even located on an island (unless one wants to count Laputa in one of the later books, which was an island of mad scientists that floated through the air). Oh and there’s an epilogue where the film sets things up for a further sequel with Michael Caine introducing a copy of Jules Verne’s From the Earth to the Moon (1865), with the implication that he has found another lost location – this despite the fact that Verne never actually had his explorers land on The Moon in either From the Earth to the Moon or its sequel Around the Moon (1870).

Under director Brad Peyton, who had previously made Cats & Dogs: The Revenge of Kitty Galore (2010), Journey 2: The Mysterious Island is a ridiculous film. About the point of the climactic scene with Dwayne Johnson attempting to jump-start the Nautilus’s century-dead batteries by harpooning a giant electric eel with a cable hooked to the engines you sit back and laugh at a film whose inherent plausibility is down around the level of a children’s cartoon. There is an equally absurd sequence with the party riding on the backs of giant bees – a slightly more elaborate version of a scene that has been copied from Honey, I Shrunk the Kids (1989) – where Josh Hutcherson is suddenly able to stunt fly a bee in about thirty seconds flat. The most absurd sequences however remain the live-action ones – like where Dwayne Johnson demonstrates the art of winning a woman to Josh Hutcherson that involves him flexing his pectoral muscles and popping berries thrown by Luis Guzman off his chest out of the 3D camera into the audience, or the mind-boggling scene where Johnson sits down to strum a version of Louis Armstrong’s What a Wonderful World (1968) on a ukulele over a camp fire.

The creature effects are all good but the backgrounds of the island have a picture postcard prettiness that makes them look false. Amid the cast, Dwayne Johnson at least gives the impression he has taken more acting lessons since Walden Media’s Tooth Fairy (2010) and seems more at ease and naturalistic on screen, even if he will never be up for an Academy Award. Luis Guzman is stuck in an entirely one-dimensional role as a comic foil.