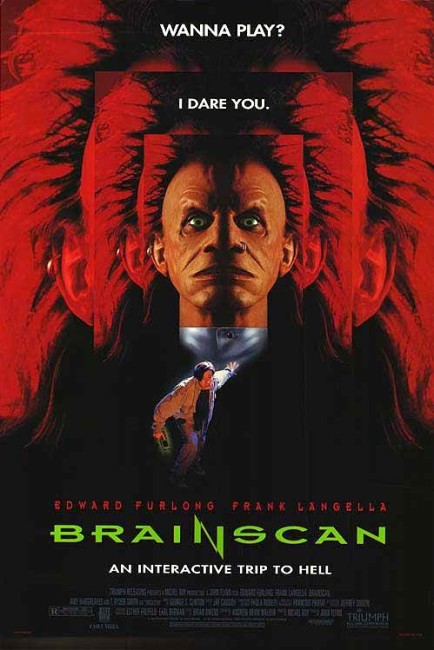 Teenage horror fan Michael Brower gets a copy of the latest computer game ‘Brainscan’, which purports to be the ultimate in horror. In the game’s virtual world, he is to play a killer, enter a house, stab a sleeping man and cut the man’s foot off as a souvenir. Afterwards, Michael is shocked to learn of a local murder being reported on the news exactly the same way he conducted it in the game and to then find the severed foot in his fridge. A gaudy figure calling itself Trickster emerges out of the game, taunting Michael that he did the killing and challenging him to carry on and complete the game. Even when Michael tries to destroy the game, Trickster refuses to let him and demands that he conduct further acts of murder, including those of his best friend and the girl next door.

During the mid to late 1990s, the Virtual Reality film was a creatively degenerated beast, consisting of a good many copies of The Lawnmower Man (1992) being conducted by people who had little idea of how computers operate. Brainscan‘s VR-become-reality scenario is no more credible than any of the other similar efforts out there – indeed, there is an undeniable similarity between Brainscan and the cheap Arcade (1994), which came out around the same time – but this is made with a little more care than most of the other efforts. Its premise, if not exactly believable, at least gives the impression of having been thought out (although the ending is annoyingly cliched).

Edward Furlong, fresh from Terminator 2: Judgment Day (1991) gives a good performance and his travails in Virtual Reality are well done. The game effects are on the cheap side and the scene where Trickster absorbs Edward Furlong is not believable as anything other than a cute optical.

The film roots itself in horror fandom – copies of Fangoria magazine keep popping up throughout. Ironically, despite standing up for horror and against censorship, the film does take amusingly literally the view that horror in the media does cause kids to go out and kill.

The script for Brainscan was one of the early works of screenwriter Andrew Kevin Walker who would go on the next year to write the amazing serial killer thriller Se7en (1995) and other genre works such as Hideaway (1995), 8MM (1999), Sleepy Hollow (1999) and The Wolfman (2010). John Flynn is mostly remembered for a series of action films throughout the 1970s and 80s, most notably the Sylvester Stallone film Lock Up (1989) and the Seven Seagal film Out for Justice (1991). His best film was the modest thriller Best Seller (1987) from a Larry Cohen script.