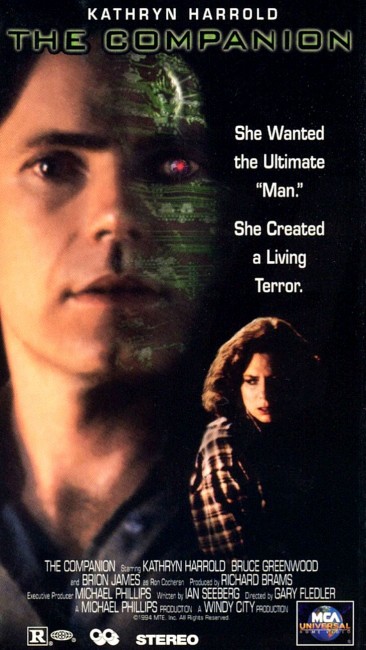 After finding her boyfriend in bed with another woman, romance novelist Gillian Tanner decides to retreat to a mountain cabin to work on her next book. Her agent suggests that she hire a male Companion android for company. Gillian is sceptical but changes her mind after meeting the Companion Geoffrey. Up at the cabin, Geoffrey’s perfection and syntactic hair-splitting drives her crazy, so she alters his personality programming to make him less perfect and then to become her lover. Desiring him to be more unpredictable and spontaneous, she overrides his safety protocols. However, this serves to make him dangerously unpredictable. His protectiveness and attentiveness becomes something controlling. He then starts to kill her friends and would-be paramours, perceiving them as a threat.

From Michael Phillips, once the producer of Close Encounters of the Third Kind (1977), comes this modest android tale. Clearly, The Companion has attempted to do more than be just another of the endless robot amok copies of The Terminator (1984) that fill the video shelves. It doesn’t quite succeed in the long run but its’ attempt to be different is welcome and refreshing.

Unlike most of androids populating the sundry Terminator copies, this makes some effort to depict an android that behaves in a credible manner. Bruce Greenwood’s Companion comes with a complete lack of personality and an infuriating syntactic perfectionism – personality is something that has to be programmed into it and this comes with a range of options as to naturalness and degree of sexuality. Most amusingly, when the Companion goes out of control, it is not because it is a killer android or some decommissioned military robot, but rather because the heroine of the pieces ignores the safety specifications in its programming.

Ultimately though, The Companion disappoints – it is not quite able to leave the killer android amok genre behind it and the latter quarter with Bruce Greenwood going out of control descends increasingly into cliche. Certainly, not many of the killer android clones have scenes with the android insisting that it is doing everything for the heroine and that it is only trying to protect her.

The Companion was the feature debut of director Gary Fleder. Fleder next went on to have modest success with the chic crime film Things To Do in Denver When You’re Dead (1996) – which is probably his best film – followed by the serial killer thriller Kiss the Girls (1997) and the thriller Don’t Say a Word (2001), before returning to the genre with the modest Impostor (2002) and A Midsummer’s Nightmare (2017), plus producing the tv series Beauty and the Beast (2012-6).