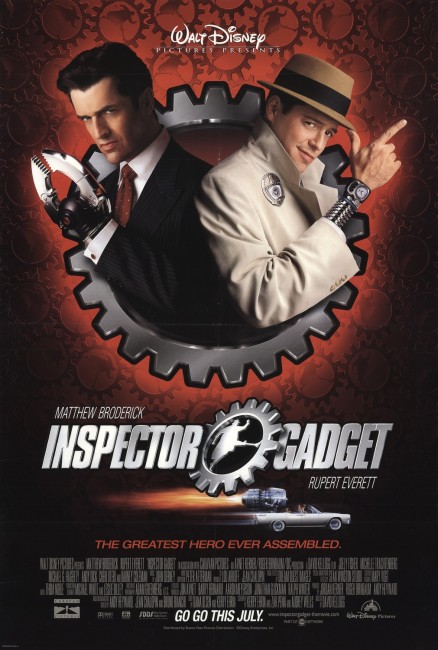 John Brown is a security guard at Bradford Laboratories in Riverton, Ohio, with dreams of one day being a police officer and of wooing Dr Artemus Bradford’s daughter Brenda. When a mechanical foot invented by Bradford is stolen by robotics billionaire Sanford Scolex, Brown goes in pursuit but is blown up in an explosion. Brenda has him rebuilt as the new prototypic police enforcement cyborg Inspector Gadget with a body housing hundreds of tools and devices for crime detection. However, Scolex, who has had his hand rebuilt with a claw following the explosion, desires revenge and unleashes upon the city Robo-Gadget, an evil android lookalike of Gadget.

Inspector Gadget was one of the more engagingly unpretentious films to emerge in the 1999 American summer season. It is a live-action adaptation of the cartoon series Inspector Gadget (1983-5), which ran for 86 episodes and featured Don Adams as the voice of a madcap Interpol agent built with all manner of gadgets.

The film is generally loyal to the basics of the cartoon series. Although there have been the odd few changes change – we do get to see The Claw’s face, which we never did in the series; Penny is present but unlike the show she is not the preadolescent genius who always saves the day for the bungling Gadget; while Brain is a standard dog and never gets to adopt any disguises. Inspector Gadget is also portrayed as much more an ineptly bumbling idiot in the series than he is here in the film.

Inspector Gadget no doubt came about after the successes of other cartoon-into-live-action film adaptations that had come out in recent years such as The Flintstones (1994) and George of the Jungle (1997). The film does an appealing job of recreating the world of cartoon physics in live-action – the title character running on spring legs, producing microscope lenses, helicopter blades and grappling hooks out of his hat, and screwdrivers, knives and cigarette lighters out of his fingertips.

A number of critics trashed Inspector Gadget for its sheer silliness but seem to be largely ignoring the fact that this is exactly what the film sets out to do – it certainly never promises to be anything more than that – and delivers on said promise with an engaging degree of visual energy, even if it is not quite at the level of madcap energy that the tv show perpetually had.

All the cast give likeable performances and about the only wrong notes are 1970s Blaxploitation star Fred Williamson’s irritating voicing of jive-talking Gadget-mobile and far too many intrusive commercial product placements. There is a highly amusing gag over the end credits with a Minions Support Group where Richard Kiel from the James Bond movies along with lookalikes of Herve Villechaize from Fantasy Island (1977-84) and Oddjob from Goldfinger (1964) participate in an AA-styled support group for henchmen.