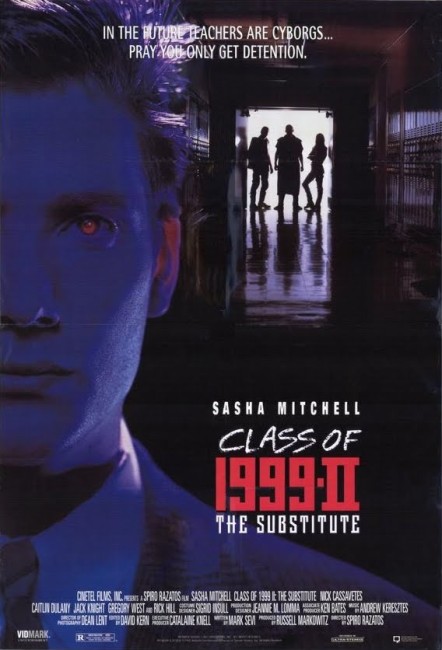 John Bolen is the sole surviving one of the military androids created by Dr Forrest. He signs in as the substitute teacher at a high school in the small town of Monroeville, California. There he begins eliminating the unruly and defiant students. Fellow teacher Jenna McKenzie is divided over standing up to give evidence in court that she saw student Sanders shoot someone, her testimony being the sole difference between whether the case is dismissed as an accidental firearm discharge or an intentional shooting. Sanders and his gang are harassing and threatening Jenna but Bolen stands up to protect her. During a paintball tournament held by Jenna’s boyfriend Emmett Grazer, Sanders and the gang attempt to eliminate Jenna and make it seem an accident but a heavily armed John stands up to hunt and eliminate them.

Mark L. Lester’s Class of 1999 (1990) was a modest hit on video shelves back in its day. Clearly inspired by The Terminator (1984), it postulated the idea of killer military androids having been repurposed to act as teachers to enforce discipline in high-crime urban areas. I’m not arguing it was a great film but the premise and the android effects did gain it some popularity during its day.

Class of 1999 II: The Substitute is a sequel. It has clearly been given a much cheaper budget than the original. We go from three killer androids to one. The film has also managed to neatly avoid the depiction of any of the stop-motion animation or makeup effects that were used to depict the killer machines in the original. Indeed, it would be not too hard, especially given the twist ending, to write killer androids out of the film and make it a film about a substitute teacher who is an ex-marine or some such.

While in the original, Mark L. Lester pumped up the despatches of the students up into a series of action and effects set-pieces, director Spiro Razatos does nothing remarkable with the ones here. Part of this, like the elimination of all the effects, can be charted up to a much reduced budget. On the other hand, you would have thought that Razatos, a former stuntman, would have done far more imaginative things with the physical stunts than he does – after the first film’s pitched battle against the machines, the climactic scenes here lamely take place in the midst of a paintball tournament.

Certainly, Sasha Mitchell has a smooth handsomeness that works rather well in the role of the emotionless machine. Although you do start to wonder after a time about some of the decidedly non-machine behaviours that he starts to exhibit – suffering PTSD, peeping in on teacher Caitlin Dulany having sex with her boyfriend Nick Cassavetes and getting sweaty and then going and shooting up Cassavetes’ shop in jealous frustration.

This does lead to the absurd twist ending that causes much of the film comes collapsing down like an ill-constructed house of cards. [PLOT SPOILERS] Here we learn that Sasha Mitchell has actually been a human all along, is in fact the son of the first film’s roboticist Dr Forrest. He was serving in the military and as a result of traumatic shock believes he is one of his father’s androids. His apparent invulnerability to bullets is improbably explained away by the fact that he was wearing body armour.

Director Spiro Razatos is better known as a stuntman and has some high-profile credits on films like Back to the Future (1985) and as a stunt coordinator/second unit director on various entries on the Fast and the Furious, Captain America and X-Men films, among a great many others. His only other film as director was the previous action comedy Fast Getaway (1991).