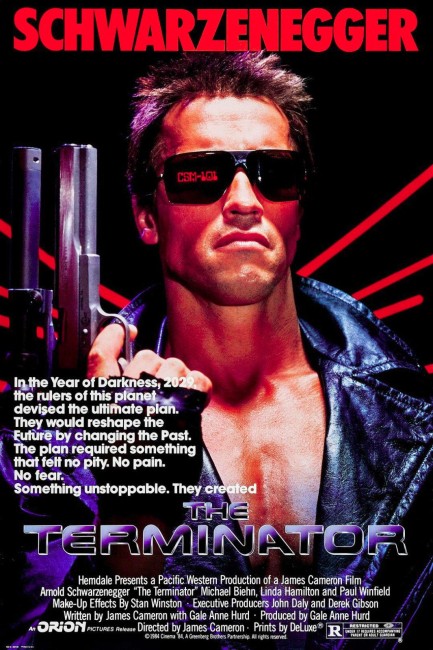 A lethal and invincible terminator android arrives in present-day Los Angeles, coming from the year 2029 where humanity ekes out a precarious survival against killer machines. The terminator arms itself and then begins to methodically eliminate every person by the name of Sarah Connor in the telephone directory. At the same time, Kyle Reese, a soldier from the human resistance, returns through time to stop the terminator. Kyle manages to intercept the Sarah Connor that is the terminator’s intended target, a waitress in her early twenties. As the two go on the run from the terminator, Kyle explains to her that she will become the mother of the resistance leader of the future and that the terminator has returned to stop him from being born by eliminating her.

Today James Cameron is one of the directors at the very forefront of filmmaking. Since the 1990s, Cameron’s films have all successively commanded the biggest budgets ever accorded a film at the point they were made. Equally, Cameron has developed a reputation as one of the most demanding and difficult directors to work with in the world. And then of course there was then runaway success of Titanic (1997), which moved James Cameron out of the suburbs of science-fiction and action filmmaking into the creator of a phenomenon, culminating in him winning the year’s Best Director and the famous “I’m the King of the World” speech.

The Terminator is where the James Cameron legend begins. Cameron had previously worked at Roger Corman’s New World facility in various categories in the special effects department and as a production designer and an editor on films like Battle Beyond the Stars (1980), Escape from New York (1981), Galaxy of Terror (1981) and Android (1982), before being granted his directorial debut with Piranha II: Flying Killers/Piranha II: The Spawning (1981). Piranha II is not a particularly auspicious debut – indeed, is regarded as a notoriously bad film. And not too surprisingly, Cameron tends not to list it on his resume. Piranha II would have been enough to kill many directors’ future careers but Cameron persisted and a few years later emerged seemingly out of nowhere with the success of The Terminator.

The Terminator is certainly one of the most influential of modern sf/action films. Along with Back to the Future (1985), which came out around the same time, it brought a new maturity and sophistication to time travel themes on screen. Time travel had previously existed as little more than another exotic adventure destination or something to allow travellers to emerge into the present. Both The Terminator and Back to the Future played up the potential causal paradoxes with considerable dexterity and the next few years would see a rapid sophistication in the conceptual possibilities that the genre offered. Of course, the other important thing that The Terminator introduced was the figure of the invincible killer android. This is a character that has turned up with tedium-inducing regularity in B-budget sf/action hybrids in the decade since, usually conducted with little sophistication and certainly none of scary relentlessness that it is in The Terminator.

The Terminator was certainly the best slam-bang action adventure since Mad Max 2 (1981) and at least until Die Hard (1988) a few years later. There are few films that have such a satisfyingly exhilarating kick to them. The Terminator hits with the clout of a shotgun and keeps moving with determined ruthlessness. The last half in particular keeps on going with the paranoid desperation of an unremitting nightmare. It is remarkable to consider that The Terminator was only made on a budget of $7 million – James Cameron makes extraordinarily resourceful use of it and achieves far better than action films with ten times that. The budget occasionally shows through from time to time. Some of the effects leave something to be desired – when the robot loses its skin it reveals the inevitable jerkiness of stop-motion animation, while the model effects of the future landscape are unimpressive.

James Cameron’s films are frequently brutal survivalist tales – ones where ordinary people take on implacable, near invincible forces bare-handed – be it lethally invincible killer machines, killer aliens, the underwater environment or the sinking Titanic. The Terminator has a hard survivalist edge that makes it the ultimate guy’s science-fiction film. (Although, the odd thing is that the hero of the show is a woman, something that made the Terminator films acclaimed by feminists for their tough female role models).

What makes James Cameron’s films stand above the run of the mill copies and most other action films is that while he arrays colossal leviathans of machinery against his protagonists and in the name of spectacle, there is an identifiably human centre to them. James Cameron films, unlike most other action films, do not have superhuman protagonists like Arnold Schwarzenegger or Sylvester Stallone (excepting True Lies (1994) – but that was meant to be a parody) but ordinary people. They are such exhilarating films because Cameron arrays truly titanic (okay, bad pun) struggles against his protagonists. The focus is not the sheer spectacle and the dealing with it through the use of cool, firepower and muscular brawn but rather through the very real sweat and the emotional strengths that Cameron manages to draw out in the process.

The Terminator was Arnold Schwarzenegger’s most aptly suited role to that point in his career (although, some might query the idea of an android with an Austrian accent). Arnold Schwarzenegger was originally considered for the Kyle Reese role but Cameron persuaded him to take the villain part instead. It was the most memorable part of Schwarzenegger’s career and arguably the one that turned him into the No. 1 action star of the next decade. Schwarzenegger and Cameron play the part for all the macho posing they can – Cameron shoots Schwarzenegger in low angle moving through a burning police station in black leather and dark glasses with a shotgun in either hand – it is a role that almost verges on self-parody. Schwarzenegger turns his wooden acting toward a lethal, emotionless coldness – it is the nearest he has come towards giving a good performance. Opposite Schwarzenegger, Linda Hamilton is bland. The part certainly brought Hamilton to attention as an actress, although she never developed much depth and a decade later had almost entirely vanished from cinema screens. She and James Cameron later briefly married.

In recent years, The Terminator has been held up as a modern genre classic. It has certainly been an enormous influence with video-shelves having been overrun by dozens of killer android sagas. While The Terminator is an immensely exciting action film, one feels that it falls slightly short of that distinction. It fails to quite hold up in story area – the twist ending is obvious from about halfway through to anyone who has read any time travel fiction.

It is not original either – Harlan Ellison sued and successfully won a plagiarism suit claiming the story was ripped from his short story Soldier (1957), which was adapted as an episode in the second season of The Outer Limits (1963-5). Subsequent prints have the end credit “Acknowledgement to the works of Harlan Ellison.” (If the makers of the film Cyborg 2087 (1966) had sued, they would have had an even better case). Certainly, as an action film with intelligence, rather than a science-fiction movie, The Terminator ranks among the top of the decade.

James Cameron subsequently went onto the enormous success of Aliens (1986), followed by the problem-ridden underwater alien contact film The Abyss (1989), Terminator 2, the spy comedy True Lies (1994), the runaway success of Titanic (1997) and the long-planned Avatar (2009). Cameron has also written the millennial virtual reality film Strange Days (1995), which was directed by his wife Kathryn Bigelow, and wrote/produced the manga adaptation Alita: Battle Angel (2019), as well as produced the near future tv series Dark Angel (2000-2), the remake of Solaris (2002), the rock diving survival film Sanctum (2011) and Cirque du Soleil: Worlds Away (2012). He also hosts and produces the tv documentary series AMC Visionaries: James Cameron’s The Story of Science Fiction (2018).

Gale Anne Hurd was married to James Cameron until 1989 and co-produced all his films up until Terminator 2. As a solo producer, Gale Anne Hurd has remained prominent at the forefront of the action and particularly science-fiction genre with her Valhalla Motion Pictures production company. Gale Anne Hurd’s solo films as producer include the human-alien buddy cop film Alien Nation (1988), the Elm Street copy Bad Dreams (1988), the monster movie Tremors (1990), the tv movie Cast a Deadly Spell (1991) set in an alternate world where magic works, the Brian De Palma psycho-thriller Raising Cain (1992), the sf prison movie No Escape/Escape from Absolom (1994), the Deadly Spell sequel Witch Hunt (1994), the monster movie The Relic (1997), the psycho-thriller Switchback (1997), the action-disaster film Armageddon (1998), the killer robot film Virus (1999), the children’s time-travel film Clockstoppers (2002), the Marvel comic-book adaptations Hulk (2003), The Punisher (2004), The Incredible Hulk (2008) and Punisher: War Zone (2008). the film version of Aeon Flux (2005), the zombie tv series The Walking Dead (2010– ), the dream and reality tv series Falling Water (2016-8), the tv series Hunters (2016) about an alien FBI team and the Halloween horror film Hell Fest (2018).