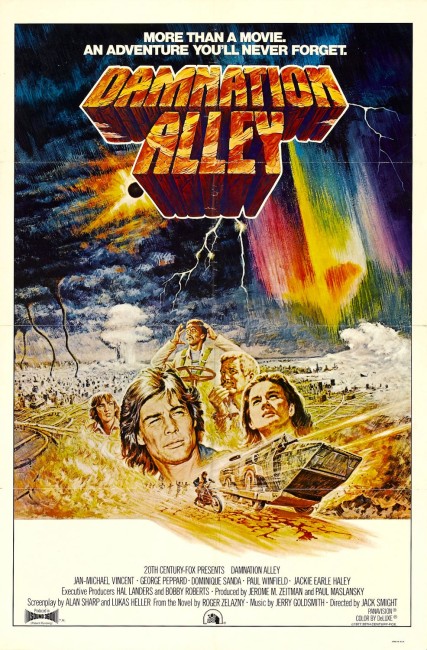 The world is devastated by a nuclear holocaust. This causes The Earth to tilt on its axis, bringing vast meteorological chaos. As the weather dies down, mutated insects start to emerge, preying on the survivors. The surviving crew at a US Air Force bomb shelter in the Mojave Desert pick up radio signals coming from Albany. The commander Major Eugene Denton unveils two armored vehicles he has constructed and announces a plan to cross ‘Damnation Alley’, the hundred mile wide strip between areas of radiation hazard, to join the survivors. They set off, taking on board two survivors, a novice singer they find in the ruins of Las Vegas, and a wild child along the way. However, the journey is also beset by giant mutated cockroaches, storms and crazed survivalists.

Damnation Alley is the perfect example of Hollywood’s lack of understanding of science-fiction literature and a case illustration of what happens when filmmakers decide they know better. The film is based on Damnation Alley (1969), a novel by science-fiction writer Roger Zelazny – indeed, it is one of the always eccentric Zelazny’s more filmable works. The book was a strong and hard-bitten story wherein the central character was a Hell’s Angel entrusted with delivering much needed drugs across a post-apocalyptic American continent. It would still make a good film someday.

Damnation Alley the film might be politely called a travesty – the Hell’s Angel hero has become a US Air Force officer and to the story has been added mutant cockroaches and giant scorpions, as well as a kid and a bimbo and written in along for the journey. If Damnation Alley had been made in the aftermath of Mad Max 2 (1981), the book might have fared better. With the Mad Max films, Mel Gibson created an archetype of the grim, post-holocaust loner anti-hero, which comes a great deal closer to the character in Roger Zelazny’s book than the bland, squeaky-clean Tanner played by Jan-Michael Vincent does in the film. With this to draw on, the book would have come across much more acceptably and at the very least could have been blown up into a decent action movie.

However, Damnation Alley is a Grade Z film. The cast get to play out in straight-face lines like “The town’s infected with killer cockroaches.” Dominique Sanda offers an explanation for her survival that involves being taken to bed in a fallout shelter beneath Las Vegas by a man who promised to advance her singing career at the time the bombs were dropped. The plausibility holes are frequently laughable – you keep asking how come if the rest of the country is devastated, the power managed to stay on in Las Vegas, or where they keep managing to find the fuel for the journey.

The ending arrived at is ludicrous because when the film finally arrives at Albany it is like a pastoral vision of Americana straight out of The Waltons (1972-81) in the midst of the wasteland. It is indicative of the film that George Peppard sets out on his mission without ever stopping to check and see whether the messages are coming from Albany, Oregon or Albany, New York.

Dominique Sanda and in particular Jan-Michael Vincent give dull performances, while George Peppard plays with a stolidly unvarying expression. The mutant bugs look laughable, although there are some interesting laser effects added in post-production to create the burned-out skies.

The only other Roger Zelazny work to ever approach filming was a supposed version of his novel Lord of Light (1967), a conceptually wild work about a planet where scientifically advanced humans pose as Hindu gods, which was announced in 1979. However, this was actually a scam set-up by the Canadian government and CIA to rescue diplomats from Iran – the story of this became the basis of the film Argo (2012), although all reference to Zelazny’s work and the projects more complicated genesis was removed from the film.

Jack Smight’s other genre films include the Ray Bradbury adaptation The Illustrated Man (1969), the serial killer black comedy No Way to Treat a Lady (1968) and Frankenstein: The True Story (1974).