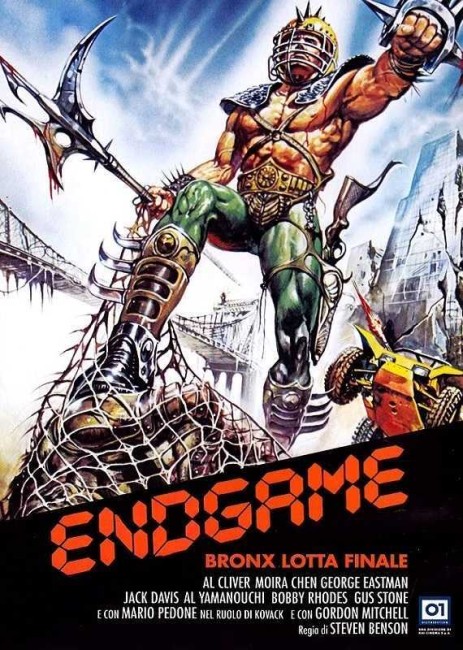 The year 2025 after the collapse of civilisation. Ron Shannon is the champion in the televised gladiatorial sport of Endgame where he is hunted by other competitors and must kill them to win. In the midst of the competition, he is approached by Lilith, a telepathic mutant, asking his help. Shannon wins the game but refuses to kill his best friend Karnack. Afterwards Professor Levin makes Ron the offer of a substantial payment of gold if he will escort a group of mutants away from the city, where they are hunted by the militia, and across the wasteland to freedom. Shannon accepts and recruits a team of tough fighters to join him. They set out, hunted by the city’s security forces and the mutant crazies of the wasteland.

Hiding behind the Anglicised name of Steven Benson is director Joe D’Amato. D’Amato is regarded as the most prolific Italian film director of all time, having made nearly 200 films between the 1970s and his death in 1999. Throughout his three decade career, D’Amato hid behind over a dozen pseudonyms and worked in many genres, although it is for his extensive output of erotic/pornographic films that he is best known. (See below for Joe D’Amato’s other genre films).

The early sections of Endgame depict televised gladiatorial games with Al Cliver as the champion in a hunt where he must eliminate the other competitors to win. The games are not that well directed – a few fights that take place in an alley setting (and oddly enough for a televised sport with no tv cameras present). This is however one of the first screen depictions of the theme of televised gladiatorial combat. There had been the earlier satirical The Tenth Victim (1965) and the little-seen Punishment Park (1971). Ahead there would be works like The Prize of Peril (1983), The Running Man (1987) and the huge hit of The Hunger Games (2012). This, as far as I can tell, was the first of them to depict televised games. (For greater detail see Films About Human Bloodsports and Death Games).

D’Amato is purported to have said that Endgame was the favourite of his films. I can only assume that this is something to do with his experience on set rather than the quality of the film. D’Amato has made much better films – I have a particular liking for Blue Holocaust (1979) – and Endgame is routine as these mid-80s Italian post-holocaust films go. The various action scenes once we get out into the desert are not too badly choreographed – the motorbike scenes come with a degree of vigorous enthusiasm. On the other hand, there is really nothing more to the film on any level beyond the provision of serial action scenes.