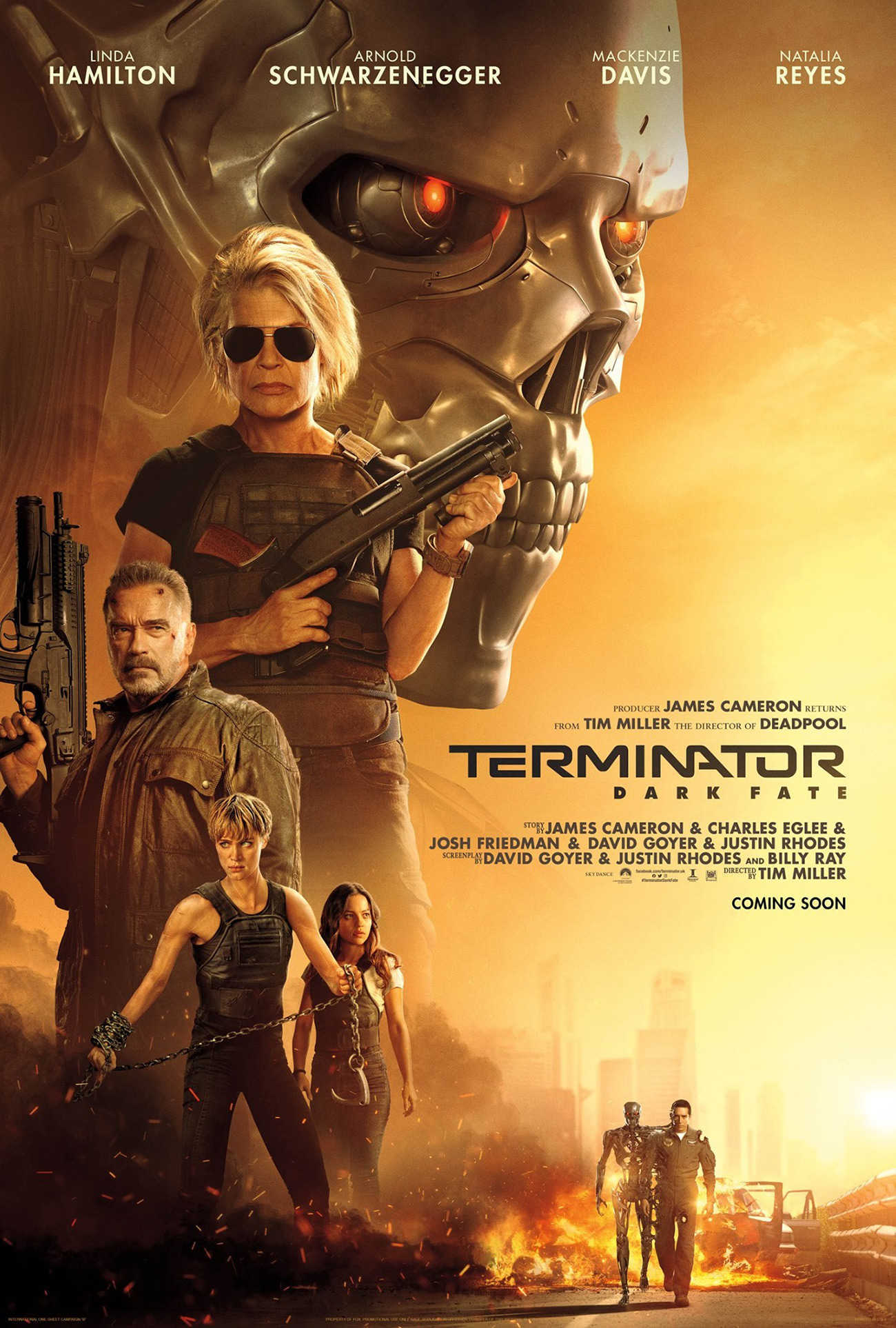 Sarah Connor prevented the future that led to Skynet. However, in Guatemala in 1998, one of the other Terminators that had been sent back in time shot her son John. 22 years later in Mexico City, a woman Grace appears near where Dani Ramos is making out with her boyfriend. The next day, a Rev-9, a liquid metal Terminator built around a robot core appears, takes the guise of Dani’s father and comes hunting her at her workplace. Grace appears and saves Dani, fighting off the Rev-9 in a furious vehicular chase. She reveals that she is an Augmented human come back from the year 2042. In the midst of the chase, they are aided by an aging Sarah Connor. Sarah and Grace explain to Dani that she will become the mother of the future leader of the resistance against the A.I. known as Legion. Sarah has been receiving a series of text messages from a mystery benefactor directing her where to go to eliminate the remaining Terminators. Grace traces the source of Sarah’s messages to Laredo, Texas. They smuggle across the US border and head to Texas where Sarah is shocked to find her benefactor is none other than the same Terminator that killed John. He reveals that with his mission over, he became self-aware and settled down to raise a family. He now joins them in the battle to stop the Rev-9.

The Terminator (1984) is a landmark film. It launched the careers of James Cameron and Linda Hamilton, and gave both Hamilton and Arnold Schwarzenegger the roles with which they will be forever identified. It created the trope of the invincible killer machine that was much imitated throughout the next decade. Cameron, Schwarzenegger and Hamilton returned with Terminator 2: Judgment Day (1991), which went from a medium-budget original to the most expensive film made in its day. It was a powerhouse of a film that remains one of the most exciting action works of the 1990s. Cameron’s experimentation with computer-generated visual effects essentially launched the CGI effects revolution that is still with us today.

Cameron left the series after that point but other hands took over the director’s chair for Terminator 3: Rise of the Machines (2003) and Terminator Salvation (2009), neither of which held a candle up to Cameron’s work, plus the halfway okay tv series Terminator: The Sarah Connor Chronicles (2008-9). The copyright was purchased by Skydance who made Terminator Genisys (2015), the single worst work to come out bearing the Terminator name. This was considered a flop despite earning $440 million worldwide, nevertheless Skydance persisted to make this sixth Terminator film. The big hook that Skydance were able to conduct with Dark Future was in being able to bring James Cameron back to the fold as co-writer and co-producer.

Cameron writes the script with David S. Goyer who has been behind a large number of modern superhero films (see bottom of page for David S. Goyer’s other works). The script is also co-written by Billy Ray who may not be a recognisable name but has some surprisingly high-profile scripts since the 1990s with the likes of Color of Night (1994), Volcano (1997), Suspect Zero (2004), Flightplan (2005), The Hunger Games (2012), Captain Phillips (2013), Overlord (2018), Gemini Man (2019) and Richard Jewell (2019). Surprisingly, there is also the hand of Josh Friedman, the co-creator of The Sarah Connor Chronicles, on script. The new director was Tim Miller who had a big hit with Deadpool (2016).

The great drawcard that Terminator: Dark Fate offers is the return of James Cameron, a now 63 year-old Linda Hamilton, who had retired from acting for the past several years, plus Arnold Schwarzenegger who has appeared in all but one of the other Terminator films. In particular, the presence of Cameron promised that this was going to be something that bettered the last three sequels.

Terminator: Dark Fate certainly grabs your attention from the very opening scene (featuring digitally de-aged versions of Linda Hamilton, Schwarzenegger and a cameoing Edward Furlong) where John Connor is shot and killed. It wakes your attention up. Thereafter Dark Fate proceeds with the simple premise of forgetting about everything that came after Terminator 2: Judgment Day. It welcomely dispenses with the absurdly convoluted timelines that came in in particular in Genisys. It is also welcome in following its time travel logic, which erases Skynet and gives us a different (albeit not dissimilar) timeline where humanity is now under threat by a different A.I. known as Legion.

Tim Miller ramps Dark Fate up into high gear with a sequence about fifteen minutes in with Mackenzie Davis engaged in a furious fight around a factory with the liquid metal Gabriel Luna, followed by a massively scaled sequence with the Rev-9 pursuing them down a highway in a truck with a catcher that bulldozes through dividers and any vehicles in the way. James Cameron had the edge with the similar scenes in Terminator 2 fighting the T-1000 in a vehicular pursuit down an L.A. highway – the sequence was easily one of the most spectacular action sequences of the 1990s. Cameron has it in terms of originality but Tim Miller ups the game to something furious and adrenalin-charged, making a sequence that often tops Cameron in terms of the sheer mass destruction.

This bodes well for Dark Fate. The other big action sequences were apparently ones that James Cameron dreamed up over the years but never found a film to put them into. The main problem is that Dark Fate puts the most charged and exciting sequence first. In particular, the subsequent sequence with various people fighting the Rev-9 in mid-air aboard a disintegrating plane, the Humvee landing on the edge of a dam and then the improbable scenes where they allow it to drop to the bottom of the dam bed and try and drive off, all seem to be like too much CGI eye candy that pass the eye by without any effect. You can guarantee that if Cameron had directed either sequence they would be standout set-pieces that would have floored us; in Tim Miller’s hands, they pass by as just more CGI.

Given that the film boasts a script from major names like James Cameron and David S. Goyer, both of whom are also listed as producers, the script is surprisingly unadventurous. In fact, for the most part it simply rehashes Terminator 2: Judgment Day with minimal difference. We get a burned out Sarah Connor (where a mid-60s Linda Hamilton shows her age and gives the impression that she has been engaged in her character’s stated hobby of blackout drinking since 1991). We have another hunted figure who is unaware of her importance to the future resistance. Arnold Schwarzenegger turns up and has developed self-awareness to become a good guy parent figure. There’s a repeat of the highway chase with the T-1000 and action sequences involving helicopters. There is even a plot where all parties showdown in the midst of an industrial plant (hydro-electric dam here) and bringing the evil machine down requires self-sacrifice on the part of the good Terminator.

Every single one of the sequels have had the conceptual issue of what do you do to top the idea of a liquid metal Terminator that was memorably introduced in Judgment Day. While we have had some inventive spins on the original, not a single one comes near the conception of the T-1000. The Rev-9 here, which has the minor novelty of being liquid metal and able to separate from its skeleton, seems like a retrograde step back to an intermediary stage between the Terminator and T-1000.

One of the better parts of the film is the casting of Mackenzie Davis, looking like she could easily be a younger, Augmented version of Linda Hamilton (albeit with Hamilton having gained a foot in height), which is what I initially assumed her character was. Davis gives a lean, well toned and almost gender-neutral performance where she seems like a fighting-machine ready to go into action at the moment’s notice. Natalia Reyes slots into the equivalent of Linda Hamilton’s original role (or Edward Furlong’s role in the sequel). While I think Reyes is a much more expressive actress than the gloopy performance Linda Hamilton gave in the first film, the great disappointment is that the script makes her the saviour of the future and then gives her absolutely nothing to do, having all the action be commanded by the returning stars and Mackenzie Davis.

The other big disappointment is the return of Arnold Schwarzenegger who feels superfluous to the film, more there because he is part of the franchise. The pieces of dialogue that Schwarzenegger gets where he describes becoming human and settling down after his mission was completed feel astonishingly casual, especially given that we are talking about he spontaneously going from an emotionless killing machine to developing self-awareness and the capacity to think and a set of moral values. Equally casual and incredulous is the scene where he explains his foreknowledge of the future due to chronological ripples (a piece of handwavium that fails to explain how he seems to have foreknowledge of events from a timeline – the one involving the Rev-9 and Legion – that he was never a part of). Schwarzenegger’s best moments here are the lines where he in perfect deadpan is describing the efficiency of bottle-feeding babies and his job as a draper.

The interesting choice has been to locate much of the action in Mexico (even if most of the film was actually shot in Spain and features Spanish actors. Heroine Natalia Reyes, for instance, is not Mexican but Colombian. The only actual Mexican actor in the film is Diego Boneta, although the American-born Gabriel Luna is half-Mexican). Especially given the antipathy towards Mexico and its people during the era of Donald Trump and Build the Wall racism, this is an appealingly subversive take. At one point, the film even has the heroes deciding that they need to illegally smuggle into the US. In a rebellious move, their escape from detention by border guards involves freeing the imprisoned detainees and escaping amidst the chaos. You also cannot help but applaud the end of the film where the revolutionary leader of the future is left in a position where she is an illegal immigrant to the US.