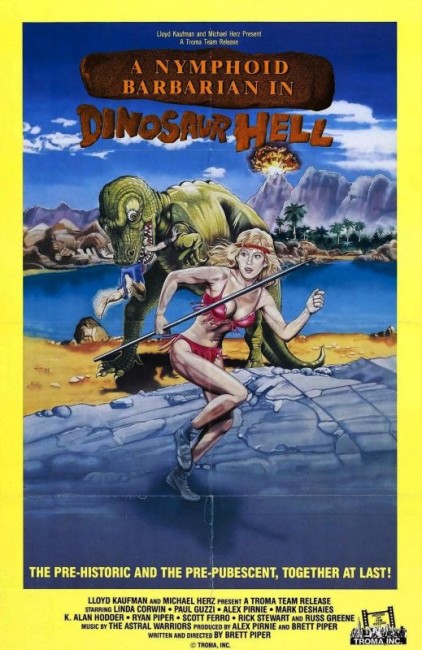 The world has been destroyed by nuclear war. In the ruins of Tromaville, the survivors have been reduced to barbarism as they try to survive attacks by the dinosaurs that roam the landscape. Lea is one of these barbarians, living in the wild with her mate Marn. They are attacked by lizard men led by the warlord Clon and Lea is dragged away as a prisoner. Having been left for dead, Marn sets out after her. At the same time, Lea makes an escape and the two of them travel through perils to be back with one another.

A Nymphoid Barbarian in Dinosaur Hell must count as one of the great exploitation titles of all time. Indeed, it is a triumph of sensational titling over content – without a doubt, the film would have the film relegated to the junkpile of utter forgettability had it gone out with a more mundane name. It was one of the releases from Troma Films who always specialised in coming up with outrageously over-the-top titles to sell films – see the likes of I Was a Teenage TV Terrorist (1985), Surf Nazis Must Die (1987), Stuff Stephanie in the Incinerator (1989), Chopper Chicks in Zombie Town (1991), Fertilize the Blaspheming Bombshell! (1992), Space Zombie Bingo!!! (1993), Pterodactyl Woman from Beverly Hills (1997), Scrotal Vengeance (2001) and Poultrygeist: Night of the Chicken Dead (2006) to name but a sampling. (See also Films With Deliberately Ridiculous Titles).

Brett Piper seems to have built on the basics of the Roger Corman cheapie Teenage Caveman (1958), albeit where the twist ending that we are in a post-apocalyptic future rather than the prehistoric past is now taken for granted. This is also a film that has readily embraced the B movie notion from One Million Years B.C. (1966) of a heroine in a fur bikini fighting dinosaurs – even if Linda Corwin fails to fill her bikini out as spectacularly as Raquel Welch did.

On the other hand, while some Troma films end up being triumphs beyond their titles and come with a ridiculously cheesy faux cynicism that makes them undeniably watchable, A Nymphoid Barbarian in Dinosaur Hell is just cheap, unwatchable and dull. What you feel like it needed was discovering some of the B-movie pizazz of films that came along only a few years later with the likes of Dinosaur Island (1994), Beach Babes 2: Cave Girl Island (1995), Dinosaur Valley Girls (1996) and Bikini Girls on Dinosaur Planet (2005), which played into the cheesy absurdity and featured numerous bikini-clad and topless girls.

There is plenty of not so much bad movie-making as the downright dull. The film switches you off right from Linda Corwin’s opening airhead bimbo voiceover introduction. There are many scenes that should have been cut – notably those involving the idiot tomfoolery among the mutant lizard men, which all come accompanied by bleeps or animal and bird cries on the soundtrack. The rest is a dreary series of adventures/encounters in the wilderness before a showdown with the evil warlord. On the plus side, the film does feature some better creature effects than usual for the typical Troma film and/or Z-budget video release of the era with Brett Piper even managing to include some stop-motion animation effects.