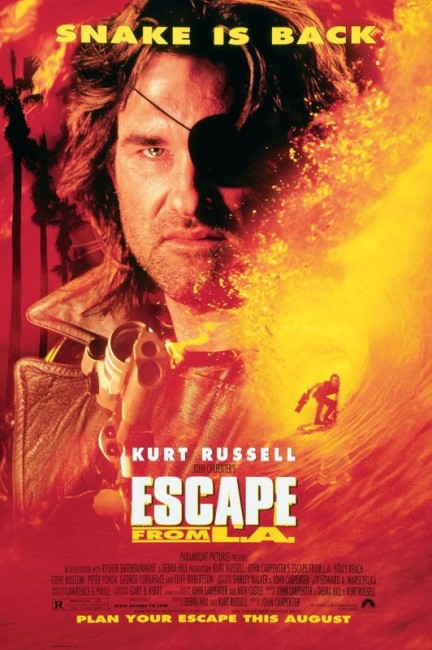 In the year 2000, an earthquake has separated Los Angeles from the American mainland. The country has been taken over by a Christian fundamentalist government and L.A. has been transformed into a prison where criminals and dissidents alike are sent. Snake Plissken is about to be dispatched to L.A. when he is offered a deal – to be outfitted with hi-tech armaments and sent into the prison to come back with The President’s daughter Utopia. She has absconded into the arms of revolutionary Cuervo Jones with a guidance system that controls The Sword of Damocles, a ring of satellites that can deliver a deadly EMP pulse anywhere in the world, and with which Jones is now threatening to bring down the entire country. When Snake refuses, he is forcibly recruited with a deadly nerve toxin injected into his blood. Inside the prison, he must deal with the revolutionaries and assorted crazies.

Escape from New York (1981) was a classic. It was the one of the very first of the modern breed of sf/action hybrids. John Carpenter directed with a slick and exciting action pace and Kurt Russell gave the best performance he has ever given then and since. Carpenter, Kurt Russell and producer Debra Hill had talked about making the sequel since at least 1986 and it finally emerged here with Escape from L.A.. Indeed, it took so long to mount the sequel that when it eventually arrived the film was only five months shy of the date the first film chose as its future setting.

Escape from L.A. came with some disappointing advance word. To get it over with yes, there is a certain level on which the sequel is merely rehashing the first film. Again Kurt Russell must go into the anarchic ruins of a big US city that has been transformed into a prison – the film having merely swapped the Eastern American seaboard for the Western; again there is a ticking timebomb planted inside his body to ensure his cooperation; this time he is not after The President but The President’s daughter; and there is the same ending that involves the substitution of a tape/disc (although the sequel does make a clever play on the expectations of the substitution raised by the first film).

While all of this is the case, there is also a good deal more to Escape from L.A. than that. For one, Escape from L.A. taps into a satirical vein that the first film only glanced over. The ruins of L.A. are presented as an amusingly satirical exaggeration of the present, inhabited by hustling agents, crazed plastic surgeons, people selling maps to the homes of the stars and armed transvestites. The film gets much mileage out of its visions of the trashed icons of the L.A. landscape – travelling past the ruins of Universal Studios, Capitol Records and signposts to Mulholland Drive and Sunset Boulevard.

Carpenter also appears to have taken onboard criticisms made of Escape from New York, that he failed to credibly establish the background social conditions as to how Manhattan Island became a prison, and this time places much more detail into building up how L.A. has become a prison. He also daringly, in light of the contemporary American political hotbed, presents a satirical vision of the US being run by a fundamentalist dictatorship. There are highly amusing little vignettes throughout, like during the opening moments where prisoners are offered the choice of being executed – “You now have the opportunity to repent of your sins and be electrocuted on the spot.”

Perhaps one of the most interesting parts of Escape from L.A. is its ending where Snake Plissken makes the choice to trigger the EMP pulse that will bring about the downfall of civilisation. In previous films, especially They Live (1988), John Carpenter has established himself as a working man’s liberal. Here interestingly he trusts neither side of the coin – either the right wing that is running the US, while equally painting the left wing revolutionaries inside L.A. as a group of unstable crazies. The only choice that appears to be left for the hero is the amazingly cynical one of bringing the entire world down. The last image in the film is that of Kurt Russell placing his faith in a brand of American matches.

Escape from L.A. gave John Carpenter the highest budget he has worked with up to that point – a mid-range $40 million. He certainly makes it show on screen, although even then some scenes had to be scaled back in order to bring the film in for an advanced schedule. What the action scenes do show though is that John Carpenter is not entirely at ease with large-scale action. Escape from L.A. lacks the slickness of Escape from New York. Certainly, the large-scale crowd scenes gathered around the basketball court and the big shootout at the climax are well handled but others scenes less so.

The high-speed sub journey through the buried ruins at the start is too cleanly a CGI effect. The basketball game is well directed but conceptually is a sequence that never goes anywhere. The scene where Kurt Russell surfs a wave and ends up in the back of Steve Buscemi’s car is both ridiculous in conception and in execution – the sort of improbable stunt that belongs more in a cartoon action film. The other disappointment about the film is the retuning of John Carpenter’s fine score from the original into a noisy hard rock piece. Kurt Russell gives an enjoyable return performance as Snake Plissken.

(Nominee for Best Actor (Kurt Russell) at this site’s Best of 1996 Awards).