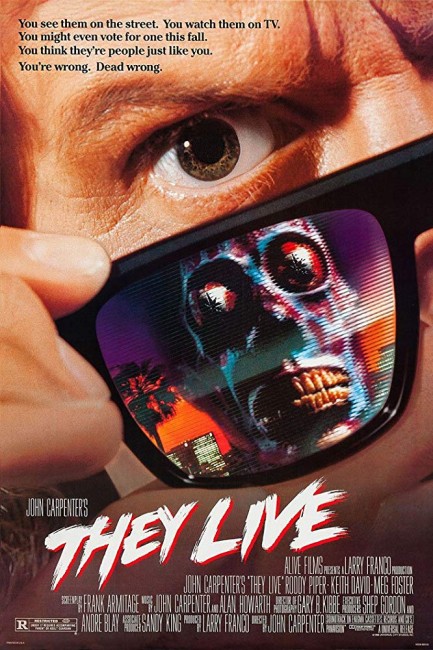 Unemployed labourer John Nada drifts into a homeless shantytown. There he discovers a revolutionary group operating from a nearby church. After the authorities raid the church, Nada takes a pair of their specially polarized sunglasses. Putting the sunglasses on, he is startled to find that the world around him is in black-and-white and that billboards and street signs carry slogans conditioning the populace to mindlessly obey and consume on the behalf of invading aliens. He recruits a co-worker and at armed gunpoint, they try to expose the invasion.

In the early 1980s, John Carpenter could be included among a select handful of the genre’s leading names with cult hits like Dark Star (1974), Halloween (1978), Escape from New York (1981) and The Thing (1982) under his belt. By the latter half of the 1980s, John Carpenter’s star had faded with less popular works like Christine (1983), Big Trouble in Little China (1986), Prince of Darkness (1987) and They Live. Into the 1990s, Carpenter’s output became sporadic to the point that he struggled to hold a second-rung genre position, even though his films are always filled with never less than interesting ideas, before he seemed to vanish altogether from screens for just about the whole of the 2000s.

They Live is John Carpenter in a satiric mood, a side of him we have not seen since Dark Star and one he would be most welcome to visit again. Carpenter (pseudonymously writing the script) bases They Live on a short story written in 1963. Under John Carpenter’s pen, this becomes a biting satire on Reaganomics and the New Right politics of the 1980s. Carpenter clearly has a strong concern for the disenfranchisement of the working class over the increasing poverty divide created by Reagan in the 1980s. They Live falls into a handful of mid-1980s films such as Country (1984), The River (1984) and Michael Moore’s Roger & Me (1989) that addressed such issues. During the opening moments of the film, Carpenter affects a series of wistful images with Roddy Piper forlornly wandering through homeless shantytowns and desolate urban landscapes looking for a job and so on. The imagery and the melancholy twang of Carpenter’s guitar on the soundtrack makes They Live almost a purebred 1930s Dust Bowl movie like The Grapes of Wrath (1940) in imagery.

The idea that the rich fuck the poor is not exactly a new one, but the idea that the Yuppies – who are shown sitting at business-table conferences talking about increased profit shares in the Earth, or chatting about Lamaze breathing courses – are part of an alien takeover is rather funny, as is the idea that reality really comes in black-and-white and has been colorized for us. The aliens are made to represent everything from environmental and Third World exploitation to conservative censorship. At one point, Carpenter even amusingly shows them on tv lecturing against “the horror films of George Romero and John Carpenter”.

However, about halfway through They Live, John Carpenter loses the plot. It is about the point that Roddy Piper walks into a bank and announces: “I’m here to chew bubblegum and kick ass – and I’m all out of bubblegum.” From this point, Carpenter seems to forget about his satiric vision and settles down into a chase/shoot-’em-up movie. Perhaps it is that Carpenter didn’t know where to take the idea he had set up – from there, the film is a steady string of shootups until Roddy Piper brings the whole system crashing down. (Many of John Carpenter’s heroes, such as Nada and Snake Plissken in the Escape movies and Ice Cube’s Desolation Williams in Ghosts of Mars (2001) are disenfranchised loners who frequently live outside of or in gleeful defiance of the system. The triumphant feat here and in the two Escape films is an act of defiance that brings a corrupt system crashing down).

Perhaps it is also that John Carpenter has allowed his enthusiasm for pro-wrestling to overshadow They Live – he is an admitted fan. Buzzsaw-voiced Roddy Piper, who had made his acting debut the year before in Hell Comes to Frogtown (1987), was always one of the most entertainingly grandstanding of the WWF/WWE wrestlers. He is not much of an actor with seemingly only two modes – a lost puppy dog downtroddenness and an angry, hard-headed anti-authoritarianism. John Carpenter bends the film out of shape to choreograph an eight-minute long wrestling sequence between Roddy Piper and Keith David – a sequence that in its protracted length starts to feel increasingly out of place. Nevertheless, most of the rest of They Live holds up and has the witty play of ideas that make all John Carpenter’s films worthwhile.

Amid the slew of remakes of John Carpenter films in the 00s, a remake of They Live has been announced for the 2010s.