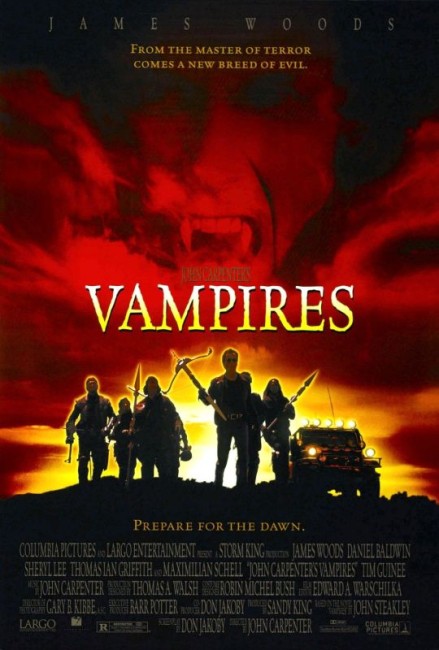 Jack Crow acts as a special agent for the Catholic Church, leading a team that hunts out and exterminates nests of vampires. While Crow’s team are partying at a motel after a mission, vampires come and slaughter all but all but Crow and his second-in-command Montoya. Crow believes that the assassin is the very first vampire, Jan Valek from the 14th Century, and that they were set-up from within the church. Joined by a novice priest, Crow and Montoya use a prostitute infected with Valek’s bite (and thus telepathically linked to him) to track Valek across country. Valek is attempting to locate the Berzier Cross, the necessary item for a reverse exorcism ritual that will allow him to walk in sunlight again.

There are surprising similarities between Vampires and Blade – both feature heroes on single-minded crusades to exterminate all vampires in vengeance for a vampire’s killing of their parent(s); both pit the slayer against a master vampire; and both feature a climax where the master vampire tries to invoke an arcane ritual that involves the shedding of the imprisoned hero’s special blood. (Both films also incidentally co-star Tim Guinee). It is also interesting to note the differences between the two – Blade revelled in the kinetic delights of being a two-dimensional comic-book and all the associated poses that went with it; Vampires, although it enjoys its good share of poses too, plays itself for a greater degree of naturalism, and comes out the better of the two films.

Vampires is directed by genre veteran John Carpenter. In the early 1980s, John Carpenter was considered a major genre name with undisputed classics such as Halloween (1978), Escape from New York (1981) and The Thing (1982). While he may not have made anything as good since, Carpenter’s ensuing genre output has never been less than interesting. Carpenter has become erratic in the 1990s/00s, putting out several of his weakest films – Memoirs of an Invisible Man (1992), Village of the Damned (1995), Ghosts of Mars (2001), The Ward (2010) – and only a couple of others – In the Mouth of Madness (1995) and Escape from L.A. (1996) – which were promising but not all they could have been, while he subsequently seemed to vanish for the whole of the 2000s. The good news was that Vampires was a strong return to form for John Carpenter and one of the best films he had made in some time.

The film is never better than Carpenter’s attention-grabbing opening with the vampire hunters posed in sunglasses like Tarantino men, emerging out of the desert sun to descend on a ramshackle house; with images like the priest blessing the instruments and they then charging into battle armed with spotlights, crossbows, harpoons and machine-guns and dragging vampires out with steel winches to be incinerated in the sunlight. It is a wonderful opening that sets the mood for the film and one that throws vampire cliches up into their air by placing a unique action movie spin on them. It is without a doubt the best sequence in the film, although Carpenter does stage some memorable other set-pieces – Tim Guinee’s suspenseful venture into the vampire lair by elevator to lure the vampires out; Daniel Baldwin’s climactic rescue of James Woods. Equally, Carpenter turns in one of his finest scores in ages – a marvellous rock soundtrack filled with a twanging steel guitar.

Don Jakoby, who has written the likes of Lifeforce (1985) and Arachnophobia (1990), turns in a decent script. There is the usual McGuffin about obtaining an arcane artifact, which many vampire films seem to need to drive their plot, but this is conducted better than it is in say Blade. Don Jakoby is not above borrowing devices from elsewhere – like the tracking of the vampire by hypnotising an infected victim that is taken straight out of Bram Stoker’s Dracula (1897) – but Carpenter and Jakoby make this one of the more absorbing sections of the film. At other points, Jakoby wittily lays into much vampire cliche. “A vampire isn’t a romantic figure in a frilly shirt with a Euro-trash accent,” James Woods remonstrates Tim Guinee in a memorable throwaway line that wittily trashes Bela Lugosi and Anne Rice in one foul swoop.

James Woods should probably get some award for getting into a performance way and above the call of duty. He lets forth with a vehement and angry hard-headedness – leaping onto vampire bodies as they are being dragged out into the sunlight to repeatedly hammer stakes into their chests – that convinces you he is trying to work out something personal. Amongst the rest of the cast, Daniel Baldwin, as always, comes across as a sweaty slob who would seem more appropriately employed running a seedy X-rated video-parlour. The underrated Sheryl Lee gives another worthwhile performance. Tim Guinee also gives a performance that develops strongly throughout the film.

Most disappointing is Thomas Ian Griffith’s vampire villain. Despite Don Jakoby’s above-quoted line, Griffith is played exactly as a modern dark romantic vampire with frilly shirt, dark frock coat, long hair and pale skin that has become a cliche. Thomas Ian Griffith has all the Goth poses but there is not much more to the character than that – for the size of the role that the story throws up (killing the prime vampire), one wishes that Carpenter and Jakoby might have given the film a more substantial nemesis than this.

(Nominee for Best Actor (James Woods) and Best Musical Score at this site’s Best of 1998 Awards).