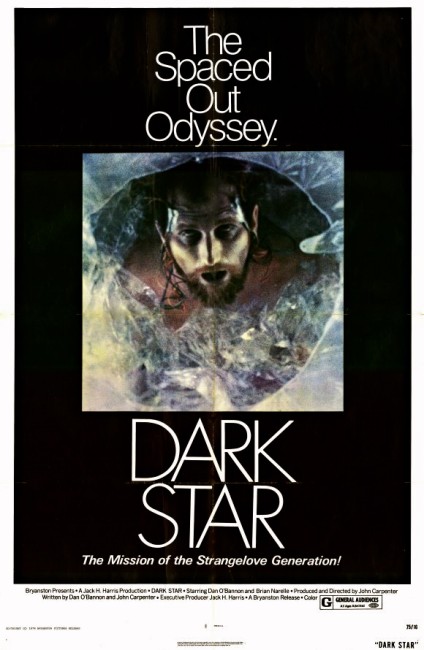 The spaceship Dark Star, with its cargo of talking, intelligent bombs, is on a twenty-year mission to destroy unstable planets that might threaten future galactic colonization. Both the crew and ship are slowly falling apart – the captain has been electrocuted and is kept half-alive in suspended animation; the acting captain Dolittle is lost in dreams of surfing; crewman Pinback is convinced he is an impostor; Boiler is obsessed with weapons; and Talby spends all his time watching the stars. They have found only one alien lifeform during the entire mission – a mischievous beachball-like creature, which now causes chaos as it gets loose in the ship. On their final run, one of the talking bombs becomes stuck inside the cargo bay. In its eagerness to head off on its mission, the bomb refuses to stop its countdown. This means that Doolittle must go outside and reason with the bomb and persuade it to not to blow up the ship.

Dark Star was the first film made by John Carpenter and Dan O’Bannon, both of whom have had immeasurable effect of the genre since. (See below for their other genre credits). The two made Dark Star while they were students at the University of Southern California, the influential film school that also included George Lucas, Steven Spielberg, Francis Ford Coppola, Ron Howard and Robert Zemeckis among its alumni.

Also present on the film are fledgling contributions from genre directors and longtime Carpenter associates Tommy Lee Wallace, who later made Halloween III: Season of the Witch (1982) and Fright Night Part 2 (1989), and Nick Castle, who made The Last Starfighter (1984) and The Boy Who Could Fly (1986); as well as effects men Jim Danforth and Robert Greenberg; model maker Greg Jein who created the mothership for Close Encounters of the Third Kind (1977); and conceptual artist/production designer Ron Cobb who worked on Star Wars (1977), Alien (1979) and Conan the Barbarian (1982).

John Carpenter and Dan O’Bannon originally made Dark Star on a budget of $5,000, using the USC student facilities and a cast and crew corralled from the people around them. The finished film impressed Jack H. Harris, producer of The Blob (1958), so much that he offered them $60,000 to bring the film out to feature length. Carpenter and O’Bannon went away and shot new scenes, which mostly consist of the ones with O’Bannon being chased around the ship by the beachball alien. Although Dark Star was not a major success when it initially came out, by the late 1970s it had become a cult science-fiction comedy.

Dark Star is a wicked and funny send-up of both Star Trek (1966-9) and 2001: A Space Odyssey (1968). It offers an hilarious flip side to in particular Star Trek‘s “boldly going where no man has gone before …” rhetoric. Rather than discovering new worlds, new lifeforms yada yada the ship’s mission is to blow up alien planets. Instead of nobly making the universe safe for democracy, its crew are suffering from cabin fever and going crazy from boredom. Rather than the pristine white space stations and bland astronauts of 2001, the ship here is dirty and falling to pieces. The climactic scenes with the bomb are an hysterical take on HAL 9000 in 2001.

Dark Star has a strung-out sense of humour that at once suggests a Philip K. Dick in his saner moments or some of the works of Robert Sheckley. (John Carpenter once wittily referred to Dark Star as “his Waiting for Godot in Space”). The film has a sense of deadpan humour that sits there and keeps building to the blackly hysterical. There is a sequence with Dan O’Bannon chasing the giggling beach-ball alien through the ship corridors where he becomes trapped in the middle of lift-shafts beneath a descending elevator and jammed in its emergency hatch where the sequence keeps going until one is reduced to hysterics. The climax, which features Brian Narelle having to don spacesuit to go and argue epistemology with the bomb in order to convince it to stop the countdown, is one of the funniest sequences in science-fiction. The final image of Brian Narelle surfing down into the atmosphere of an alien planet on a piece of debris from the ship suits the film’s spun-out lunacy perfectly.

The effects are extremely ambitious for the film’s budget. Greater technical sophistication today makes these look cheesy but in their time these were highly accomplished. The sets are also exceptional considering that they were built on a next-to-no budget.

Let There Be Light: The Odyssey of Dark Star (2010) is a documentary about the making of the film.