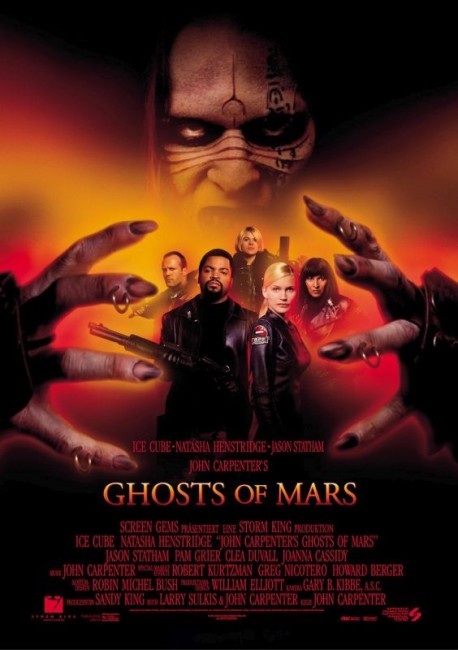 The year 2176. Mars has been 84% terraformed towards an Earth-like atmosphere. A police train returns to the city of Chryse from a mission to a mining town to pick up wanted murderer James ‘Desolation’ Williams. However, aboard the train there is only a single survivor of the mission, Lieutenant Melanie Ballard. An enquiry is held to determine what happened, where Melanie tells her story:– Upon arriving, the squad found the town deserted with bodies of the townspeople having been decapitated and hung upside down. Desolation was one of a handful of survivors in the town’s jail. They were then attacked by the townspeople whose bodies had been taken over by the spirits of dead Martians who have been unleashed from a recently uncovered tomb and were determined to eliminate all outsiders on the planet. After the death of the commander, Melanie was forced to take command and join forces with Desolation and his gang in order to survive.

There was a time when John Carpenter was one of the preeminent genre directors. Carpenter has turned out at least four indisputable genre classics – Dark Star (1974), Halloween (1978), Escape from New York (1981) and The Thing (1982). Since the mid 1980s though, John Carpenter’s position has slipped back to only the quite good and none of his output seems fired up in the way his earlier works were. Certainly, John Carpenter’s films no longer attract the same cult they used to. The 1990s found Carpenter becoming less important as a genre director. He was not quite become as washed-up as Tobe Hooper – his films still at least received cinematic releases (although this was the last one of his to do so). The point in the 1980s when Carpenter was making a film a year became filled with increasingly sporadic gaps and a number of projects that have failed to make it off the ground. That said, John Carpenter is a talent who always makes an interesting film even when he is making a bad film.

Ghosts of Mars is symptomatic of the modern John Carpenter. It was originally announced as part of the Mars movies trend of 2000 that included Mission to Mars (2000) and Red Planet (2000), but delays held its release up until a year later. When Ghosts of Mars finally did emerge, it definitely seemed one of John Carpenter’s weaker films. Even if its pre-publicity and trailer did not seem promising, one was sure that Carpenter would mount as a hard-bitten action film akin to Escape from New York. (In fact, it appears that the film originall started as the third Escape from New York film but Carpenter was forced to rewrite the script after the poor box-office performance of Escape from L.A.).

However, what emerges on screen seem no more than a thinly disguised science-fiction version of Carpenter’s Assault on Precinct 13 (1976) about a group holed up in a police station by hordes of crazed gangs outside. In fact, Ghosts of Mars makes more sense when you view it in terms of a terrestrial gangland siege film than as a science-fiction film. The alien threat never looks any more alien than a standard marauding street gang. Indeed, all the imagery of the marauding horde has been taken from gang imagery – leathers, mohawks, body piercings, filed teeth. The gang leader (it is never entirely clear if he is a resurrected alien or a possessed human) has been modeled on Marilyn Manson, while Carpenter recruits Anthrax to help compose a heavy metal soundtrack. It would not take much to transplant the film to say The Bronx or South Central L.A.

Mission to Mars and Red Planet, both underrated films, offered conceptually challenging ideas about humanity exploring the red planet, encountering alien artefacts and lifeforms. (Although more than these Mars movies Ghosts of Mars closely resembles 2000’s other great underrated science-fiction film Pitch Black (2000), which featured a group of people besieged by a hostile alien lifeform and having to throw their lot in with a hardened criminal for mutual survival). In comparison to these other Mars movies, the science-fiction content here is routine.

John Carpenter has the interesting idea of making Mars a matriarchal society. However, this is just an idea thrown at us more than it is ever something we see on the screen. There is no more to it as a concept than having several women in charge. Certainly, there is no sociological explanation of how conditions could have changed that such should be the case. The one good part about the film here is Natasha Henstridge, the former model who made her acting debut as the alien sex predator in Species (1995). One dismissed Henstridge at the time as another model turned actress whose talent ended with her looks, but here Henstridge shows her mettle and gives an admirably tough performance. A scene where she overpowers tough guy Duane Davis has the whole audience cheering.

The one negative point about her character is the relationship with Jason Statham (then not quite the A-list action star he became a couple of years later). He is portrayed as an obnoxious jerk, making constant crass propositions, but then Carpenter has her seemingly throw her disgust away and start kissing him, something that comes out of nowhere in a bizarrely unmotivated way and then vanishes, never to be mentioned again, leaving us confused.

Rapper Ice Cube (real name O’Shea Jackson) plays another of John Carpenter’s criminal anti-heroes, but he never comes across as the big action star that the film’s publicity machine seems to want to portray him as being. Contrast Ice Cube’s performance here to the magnetic intensity Vin Diesel brought to the almost identical role in Pitch Black, and in comparison Ice Cube merely seems to be in a bad mood and pissed off about something. Amusingly, despite the film’s matriarchal society concept and Natasha Henstridge’s tough female lead (who is the central character in the film), she is second-billed beneath Ice Cube.

On most regards, Ghosts of Mars is a disappointment. Carpenter throws in tough hard-edge characters and creates a potentially good bottleneck situation, even if the menace being faced is uninteresting. However, he never winds any of it up. There are numerous jumps with people popping up unexpectedly and bodies falling out of closets but these seem woefully tame in comparison to the eerie tension of Carpenter’s Halloween and The Thing, or even lesser Carpenter classics like The Fog (1980). A scene like where Natasha Henstridge is possessed and abandoned outside with the other crazies should have been intensely gripping but fails to be.

Carpenter also likes open-endings that seem to slingshot off into the start of another adventure, but the one we are left with here rather suggests the film is about to pull a big scale climax before it just abruptly ends. If Ghosts of Mars had been a direct-to-video B sf/action movie, this would have been competent enough; it is just with John Carpenter at the helm that one expected more. Ghosts of Mars ended up a box-office flop and it took nine years before John Carpenter returned to the director’s chair with The Ward (2010).