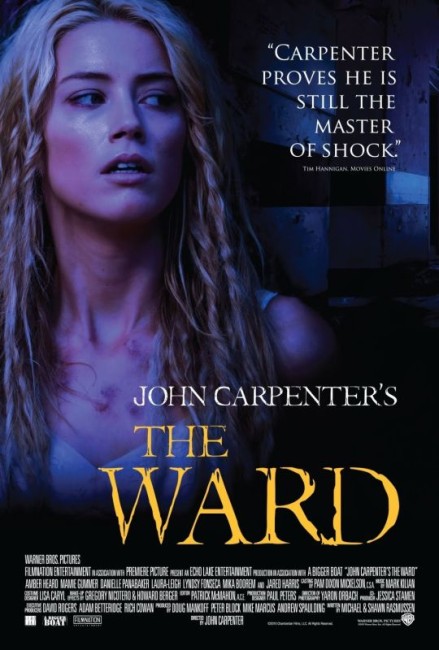 North Bend, Oregon, 1966. Kristen is committed to a psychiatric institution after being found by police having burned down a farmhouse. She is placed in a special isolation ward with several other girls where Dr Gerald Stringer tries to deal with her problems with the use of drugs and electro-convulsive therapy. Kristen remains defiant throughout. She also becomes aware that there is a ghost in the ward that is killing the other girls one by one. Nobody will talk about it, even as the other girls disappear. Kristen gradually learns that the ghost is Alice Hudson and how the other girls teamed up to kill her off. She tries to organise the girls into making an escape before they are all killed.

After Ghosts of Mars, John Carpenter fell silent for the entire decade of the 2000s until the release of The Ward in September, 2010 – that is unless one counts an episode of Masters of Horror (2005-7). He was announced as director of several projects during this time – most consistently L.A. Gothic – but the decade has ironically seen more remakes of John Carpenter’s works – The Fog (2005), Rob Zombie’s Halloween (2007), The Thing (2011) and the announced remakes of Escape from New York and They Live – than we have seen original Carpenter works. While George Romero used the 00s fad for horror remakes to stage a comeback after falling into a similar slump, Carpenter failed to similarly ride this wave to make a return. Nor does The Ward seem set to reverse that trend. Though it did play theatrically in the UK, it went directly to dvd and cable in the US and most other markets.

John Carpenter was an essential part of genre cinema when I grew up. It has however been many years since it felt like Carpenter set the world on fire. I wanted very much to hope that he still had it when it came to The Ward. The set-up is okay, although not hugely promising. We have had ghost stories set in asylums before – most notably Gothika (2003). The girl’s ward setting reminded of Girl Interrupted (1999) – maybe a ghost story version of Girl Interrupted – while there are also undeniable similarities, particularly in terms of the film’s twist ending, to Zack Snyder’s subsequent Sucker Punch (2011).

Watching The Ward, you are reminded of how John Carpenter is a far more atmosphere driven director than most of the directors working in the horror film today are. His style seems slower, more laidback, more focused on the build-up whereas modern directors would almost certainly have thrown in jump shocks to spike interest earlier on in the show. Even so, The Ward seems subdued and quiet. Directorially, we only get a couple of very minor jumps throughout – one scene where Amber Heard hides in a darkened room and a hand emerges behind her, followed by a rattling morgue drawer. The rotted corpse that keeps turning up is not very scary at all. Ultimately, The Ward seems no more than a slightly better budgeted version of a forgettable direct-to-dvd ghost story. It is certainly a very anonymous film on Carpenter’s part – we don’t even get one of his classic scores, just a formula piece tuned by a scorer for hire. It disappointingly feels as though John Carpenter has lost his mojo.

The Ward eventually perks up slightly with its twist ending. [PLOT SPOILERS]. As many films have tried to do over the last few years, this falls into yet another desire to produce an M. Night Shyamalan left field twist that turns all of our expectations on their head. Here it is revealed that the ward is allegorical and that all the other girls, including heroine Amber Heard, are split personalities inside Mika Boreem’s head. Unfortunately, such a twist ending was spoiled in large part by Martin Scorsese’s very similar Shutter Island (2010), which was released seven months before The Ward came out. Even before that, the idea of a horror film where the people being killed are allegorical aspects of someone’s split personality was conducted in Identity (2003).

Eventually though, I felt annoyed by this ending. The Shyamalan-esque left field twist ending has become overworked and The Ward fails to offer up a particularly original variant. It also seems one that blatantly cheats on its internal logic. When it comes to scenes focused around the rotted corpses killing the other girls in gory detail, the film gives blatantly deceptive misdirection that what we are watching is a supernatural horror film. It is never fully justified, for instance, what the rotted corpse killing people is meant to represent. There is also a final twist ending where Mika Boreem goes to a bathroom cabinet and is attacked as Amber Heard leaps out, which seems more like an ending out of a 1980s A Nightmare on Elm Street sequel, and makes no real sense in terms of the film’s established logic.

John Carpenter certainly brings together an amazing cast of up and coming teen/twenties girls. Lead actress Amber Heard has gained a name in the horror genre – the sort of role that Carpenter placed Jamie Lee Curtis into for a time – after roles in films like All the Boys Love Mandy Lane (2006), The Stepfather (2009), Zombieland (2009), And Soon the Darkness (2010) and Drive Angry (2011) but has failed to do much to stand out in any of these. Here Heard starts to show what she can do and carries the lead with a capable toughness and assertion. The best performance however comes from Meryl Streep’s daughter Mamie Gummer who does a fine job of playing the role of a mentally ill girl with a brittle outward nervousness.