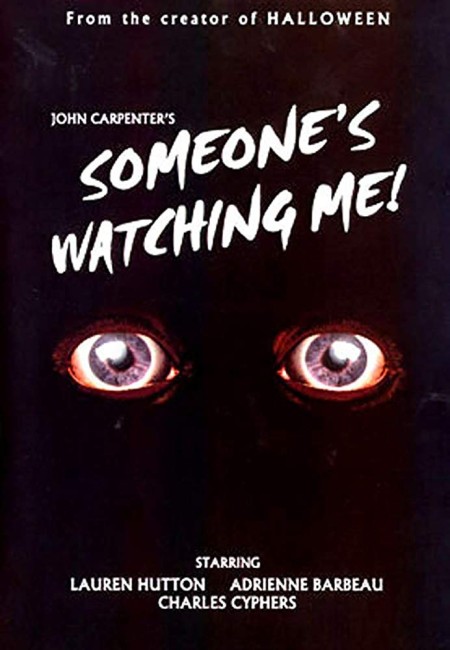 Leigh Michaels take up a new job and moves into an apartment in L.A.’s Arkham Towers. Immediately after she moves in, she is subject to a series of harassments, including gifts in the mail, anonymous phone-calls and mysterious power fluctuations inside her apartment. The police refuse to believe her complaint. Eventually Leigh works out that the caller is in the apartment block opposite her and is spying on her with a telescope. When she calls the police with her suspicions, the mystery man changes his apartment so that they find no evidence. Leigh realizes that the only recourse is for her to fight back against her stalker.

Someone’s Watching Me lacks the suspenseful impact that Halloween had. To his disadvantage, John Carpenter is working in the medium of television where the ability to sustain tension is constantly being disrupted by the need for commercial breaks. Nevertheless, Carpenter does succeed in keeping the film at a frequently high degree of tension. As he did in Halloween, Carpenter does not spend too much time fleshing out the characters but quickly heads to the suspense. He uses the familiar peripheral shots and fluidly mobile camerawork that he did in Halloween. He also has an unparalleled ability in setting up red herrings, where he more than ably hold the attention, eventually arriving at a nail-biting climax.

While made for television, Someone’s Watching Me is certainly a film that is much more lively and visually exciting than the usual made-for-tv movie. In many ways, in terms of what Carpenter does here, creating a slick, finely tuned work of suspense for the tv medium, Someone’s Watching Me is not unakin to Steven Spielberg’s Duel (1971), another film that was made as a throwaway effort for tv but ended up surpassing itself due to the calibre of the then-unknown director assigned to it.

The main thing that Someone’s Watching Me will probably be remembered for is its setting up the blueprint for the psycho-voyeur themes that many of the slasher films of the 1980s tediously copied – see the likes of Eyes of a Stranger (1981), The Seduction (1982), Visiting Hours (1982) and Lady Beware (1987). The set-up in Someone’s Watching Me owes more than a good debt to Alfred Hitchcock’s classic thriller Rear Window (1954), which had James Stewart as a housebound man who spots a murder occurring in the apartment opposite.

Someone’s Watching Me was also the place where John Carpenter and later wife Adrienne Barbeau met – she having a part here as Lauren Hutton’s lesbian co-worker. Aside from Adrienne Barbeau, there are several other John Carpenter regulars here, including actor Charles Cyphers and Carpenter’s regular producer Richard Kobritz.