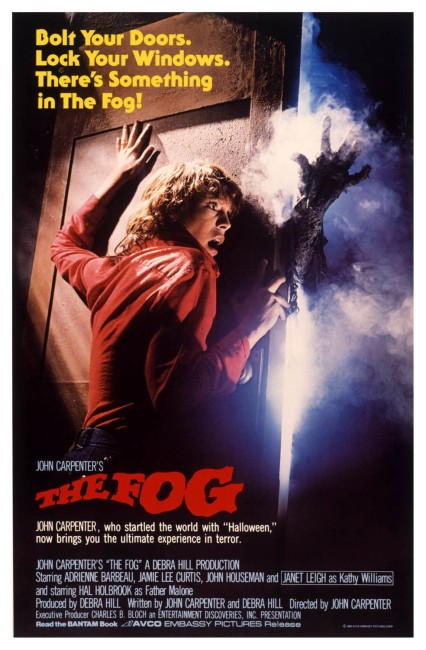 A mysterious fog bank crosses the small Californian coastal town of Antonio Bay on the night of its 100th anniversary. The fog causes mysterious happenings around the town. Out of the fog comes the sailing ship Elizabeth Deane, which contains ghostly figures that slaughter the crew of a passing fishing boat. A brick falls out of the wall in the local church and the priest finds a journal that tells how back in 1879 the Elizabeth Dane came into the bay, carrying a consignment of lepers with the intention of setting up a colony nearby and how the locals deliberately lured the ship onto the rocks and wrecked it so that they could steal the gold to build the town. The ghosts of the sailors now emerge to slaughter the descendants of the townspeople in revenge for their own lives.

While his work has paled since then, director John Carpenter was at his heyday in the early 1980s. That was the time when Carpenter had pulled off the cult successes of Dark Star (1974) and Assault on Precinct 13 (1976) and the amazing runaway phenomenon of the original slasher film Halloween (1978), before going onto fan favourites like Escape from New York (1981) and The Thing (1982). The Fog was John Carpenter’s immediate successor to Halloween. Although it was a reasonable success in its time, The Fog is one John Carpenter film from that period that is overlooked and has failed to garner the cult enthusiasm that the abovementioned works do, even though most who see it tend to enthuse about it.

The Fog was John Carpenter’s first film with a modest budget (ie. more than a million dollars) and the backing of a studio. It is one where Carpenter is clearly torn between the pressure to create another Halloween and the desire to do something different. While The Fog is not quite up there with Halloween, Carpenter manages to pull off some great individual fingernail-biting moments – Jamie Lee Curtis in a truck that is skidding in the mud as the ghostly seamen close in around it, people hiding as the ghosts batter at their doors; and an extremely tense climax with the seamen chasing Adrienne Barbeau across the roof of a lighthouse.

Carpenter also creates a number of hauntingly otherworldly images – of the glowing fog moving across the bay, and especially the image of the ghost ship appearing out of the fog, passing the fishing boat silently by as though it was ship carved out of ice and all lit up. Carpenter sets the initial scene perfectly with the framing device of a campfire tale about the story of the Elizabeth Dane being told by old seadog John Houseman, which pulls away just as the town bells strike midnight and things start happening of their own accord – car alarms going off, glass breaking, dogs barking. Carpenter also delivers another of his eerily haunting scores.

On the other hand, John Carpenter never fully winds The Fog up with the same seat-edge tension of Halloween. There is never the same sense that Halloween had of something potentially lurking in every corner of the frame and likely to pop-up with a big ‘boo’ at any moment. While The Fog is a film that delivers some very tense and eerie moments, it is never one where John Carpenter is engaged in a single-minded series of games with the audience.

The ghosts seem like B-movie zombies without much individual presence. These may well have owed their inspiration to the zombies in Amando De Ossario’s Blind Dead series, in particular Horror of the Zombies (1974), the second entry, which was set aboard a ghostly galleon. In the documentary In Search of Darkness: A Journey Into Iconic ’80s Horror (2019), Carpenter states that the fog was inspired by a trip to Stonehenge on a misty morning.

Moreover, The Fog is a film that exists only in terms of the scares that John Carpenter provides but feels as though it is built on a network of swiss cheese logic when one looks underneath in any way. If the seamen have returned to kill the ancestors of those who were responsible for their deaths, why do they kill a stack of innocent victims as well? What causes the bodies of the slaughtered fishing boat crew to turn up as though they have been underwater for months? What causes the body of one of the slaughtered fishermen to suddenly get up off an autopsy table, especially when such never happens to any of the other victims? If the townspeople wrecked the Elizabeth Dane to get its gold to finance the building of their town, then how come the gold is still there smelted down as a crucifix at the end? Why does a doubloon that Adrienne Barbeau’s son find on the beach turn into a piece of driftwood and later start leaking seawater?

Halloween, for all that you can say about its slimness of plot, at least had consistency. Part of the problem here though was was due to substantial reshoots on John Carpenter’s part, after he had decided that the original film he delivered was not scary enough. All of that said, the jumps that Carpenter produces are eerie and unsettling and The Fog is certainly well above average.

The Fog is held together by Adrienne Barbeau, who became John Carpenter’s wife after first appearing in his psycho-thriller tv movie Someone’s Watching Me (1978), and gives a strong and intelligent performance. Halloween‘s Jamie Lee Curtis is also there but relegated to a supporting role. She brings with her her mother Janet Leigh, the original slasher movie victim in Psycho (1960). Other Halloween alumni include Charles Cyphers and Nancy Loomis.

John Carpenter fans can also enjoy the numerous references and in-jokes throughout. Carpenter thanks former associates by naming characters after them – thus we have Tom Atkins’s character named Nick Castle after Carpenter’s production designer and Escape from New York co-writer, later a director in his own right with The Last Starfighter (1984); a sheriff’s deputy named Dan O’Bannon, after Carpenter’s Dark Star collaborator who later became a prolific genre writer and director, including delivering the script for Alien (1979); and a Mrs Kobritz after Richard Kobritz who had produced Carpenter’s Someone’s Watching Me and later Christine (1983). You can also notice a reference to a Bodega Bay – the setting for Hitchcock’s The Birds (1963); a pathologist known as Dr Phibes after the character in The Abominable Dr Phibes (1971); and an “Arkham Reef” after the fictional town in H.P. Lovecraft’s stories. The Fog should not be confused with the James Herbert novel The Fog (1975) about a madness inducing chemical cloud, a story that would also make an excellent film someday.

The Fog was later remade as The Fog (2005), one of a whole host of modern remakes of 1970s-80s horror films, where it was badly reconceived as a teen horror film and proved a disaster. Here John Carpenter also served as co-producer.