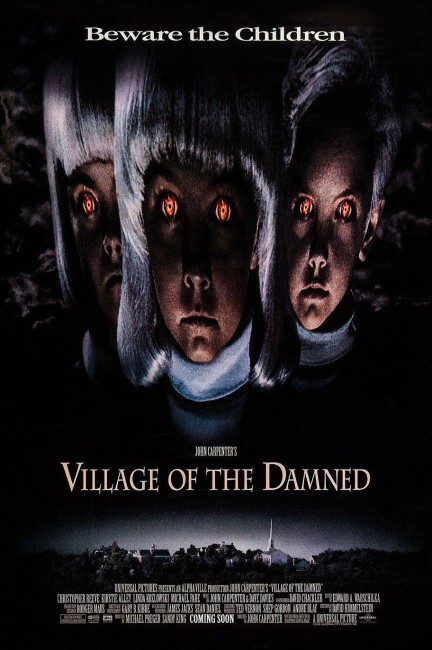 The populace of the Midwest American village of Midwich suddenly all go to sleep at once. After six hours, the people wake and not long after that all the women of child-bearing age discover that they are pregnant. The children are all born with pure blonde hair and demonstrate great intelligence. As they grow up, the children demonstrate the ability to operate as a group mind and be able read thoughts and control the minds of the townspeople. Any that oppose them are mentally driven to kill themselves.

Village of the Damned (1960), based on John Wyndham’s novel The Midwich Cuckoos (1957), was a British entry into the 1950s alien invader genre. It was crafted with an eerie tension that travelled well into that place of psychological anxiety that the better American equivalents of that era inhabited. It also spawned a lesser sequel with Children of the Damned (1964). This remake comes from John Carpenter, the cult genre director responsible for the likes of Dark Star (1974), Halloween (1978), Escape from New York (1981), Starman (1984) and Big Trouble in Little China (1986).

Alas, Village of the Damned is probably the weakest film in John Carpenter’s generally worthwhile oeuvre and falls well short of its predecessor. It is doubly disappointing in that Carpenter also made The Thing (1982), a remake of the 1950s classic The Thing from Another World (1951), which succeeded in brilliantly redefining the original. In this case, John Carpenter’s remake of Village of the Damned only succeeds in missing everything that made the original so tautly atmospheric.

John Carpenter occasionally achieves some effect, particularly when it comes to the alienness of the children. The children’s leader Lindsay Haun plays well – although is not a patch on Martin Stephens in the original. One moment where she smiles and mockingly calls Christopher Reeve ‘Daddy’ is great. However, the children’s effectiveness is undone by a set of unconvincing wigs that make them look like blonde refugees from Beatlemania.

More importantly, Village of the Damned 1995 never grips you with an eeriness the way that the original did. In lieu of any of the psychological atmosphere of the original, all that John Carpenter seems to do is substitute a shock killing every few minutes – Mark Hamill blowing his own head off with a rifle; George ‘Buck’ Flower jumping from a roof; Michael Paré crashing in his pickup and so on. The only one of these conducted with any imagination is the scene where Kirstie Alley is forced to conduct unanaesthetised DIY surgery on herself. By the time of an oversized police shootout with cars and helicopters exploding, the remake reaches an overwhelming sense of pointlessness.

John Carpenter certainly has a good cast on hand, including Christopher Reeve just one month before the accident that left him paralysed, and the always watchable Kirstie Alley, who plays with sardonic humour. Most of the rest of the the cast are subdued – Michael Paré is one of the four cast members who gets poster billing despite being killed at the beginning after having only a couple of moments of screen time. John Carpenter also turns in his weakest score yet.

David Himmelstein’s script has made some effort to ring up new and interesting nuances on the original Village of the Damned. The battle lines are far more ambiguously drawn than they were in the 1960s. There is a subplot about how one of the children comes to discover emotions and ultimately gets spared at the end. The script also invests more time in exploring the cold superiority of the children, giving them a number of opportunities to lecture in favour of hard Social Darwinism. The result though is that the children seem much more evil and calculating than they did in the original where they were merely cold and alien. Some of the killings have so little point to them in terms of why the kids would want to inflict such on adults – like why Christopher Reeve’s wife shoves her hand in the pot, or all the suicides – that they end up making the children only seem cruelly sadistic.

One of the more interesting aspects is the social changes the film reflects. Production of the 1960 Village of the Damned was held up for several years and had to be transferred from the US to the UK because of protests from the Catholic Legion of Decency over its blasphemous take on Immaculate Conception. The first film never even showed any pregnant women. Today the remake can talk about abortion, show simulated birth scenes and afterbirth-covered babies without even raising a murmur. Another interesting change is the portrayal of the government – in the first film, they were the unquestioning Defenders of The Realm, here they have been turned into a standard government conspiracy/coverup. Not that the government ever turns out to be covering anything up – it is just the standard light for governments to be shown in these days.

What perhaps is noticeable is what Village of the Damned 1995 misses out on being. With just a nudge in the right direction it could have become a devastatingly effective exposure of contemporary America, as John Carpenter’s next film Escape from L.A. (1996) showed signs of doing. The way contemporary America has come to revere the family above all else and use the name of childhood innocence to hide behind in justifying almost any type of censorship and conservatism is frightening – a truly scary Village of the Damned could have devastatingly bitten into such a subtext.