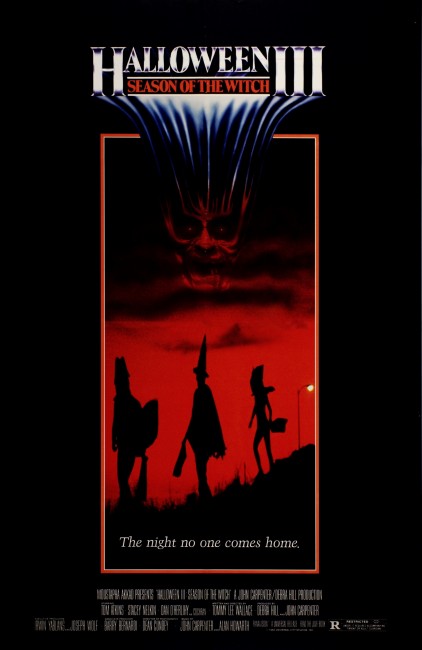 A man is brought into a hospital emergency room and shortly after a businessman enters the room and crushes the man’s skull. Pursuing the killer, Dr Dan Challis is startled to see the businessman douse himself in gasoline and then set fire to himself. Disbelieving the police diagnosis of the man being high on drugs, Dan teams up with the murdered man’s daughter Ellie Grimbridge to investigate. The trail leads them to a small Southern California town of Santa Mira, which is controlled by the Silver Shamrock toy company. There they learn that the company’s sinister director Conal Cochran, aided by an army of androids, is planning to put out a series of Halloween masks that have chips of a stolen pillar of Stonehenge embedded in them and will unleash ancient Celtic witchcraft rituals on Halloween night.

The massive success of John Carpenter’s Halloween (1978) invariably mandated a sequel. This emerged as the disappointing Halloween II (1981). When it came to Halloween III, John Carpenter, who was still maintaining producer control over the series, took a different tack. It was his idea to use the name Halloween as a banner for an anthology series. Thus Halloween III: Season of the Witch bears no relation to Michael Myers and Halloween I or Halloween II, bar some of the production personnel behind the first two films. (The original Halloween can be briefly seen playing on a tv in the background here). To justify the title, the Silver Shamrock masks are called the Halloween Three, although it should be noted there are no witches in the film. Alas, Halloween III: Season of the Witch was not a wide success and Carpenter and producer Dino De Laurentiis discontinued the idea of a Halloween anthology series. The rights to the series were later sold and a further six Halloween films made, beginning with Halloween 4: The Return of Michael Myers (1988), although all of these retreat to the commercial safety of the Michael Myers/Meyers saga.

Despite its lack of success, Halloween III: Season of the Witch is not an uninteresting film. It was originally written by Nigel Kneale, the creator of the Quatermass saga. (See The Quatermass Xperiment (1955) for Nigel Kneale’s other credits). Kneale is a particular idol of John Carpenter’s – Carpenter, for example, took the name Martin Quatermass on his script for Prince of Darkness (1987), makes Kneale references in In the Mouth of Madness (1995) and was at one point attached to direct a remake of The Creature from the Black Lagoon (1954) from a script by Kneale. However, Nigel Kneale departed after differences of opinion with John Carpenter over the taking of his ideas in slasher directions and refused credit on the finished film. There are many ideas present that are clearly Kneale-like – the idea of magic and the supernatural having scientific explanations, while the reactivated dolmens is a plot idea that Kneale also used in The Quatermass Conclusion (1979).

Halloween III: Season of the Witch has a plot that is not easy to swallow – a mad scientist with an army of androids has chips from a pillar of Stonehenge that he has stolen and inserted in mass-produced Halloween masks that he plans to activate on Halloween night. It is never entirely clear what Cochran’s plan is and what he hopes to achieve with this. Nor is it clear what the Halloween masks do, what makes them produce insects out of people’s mouth and how exactly the masks are intended to aid Cochran’s world domination plan. Characters are slimly drawn.

That said, Tommy Lee Wallace proves a better director than writer. He builds up an effective degree of paranoia around the town – named Santa Mira after the fictional town in Invasion of the Body Snatchers (1956) – and the factory. He creates often striking, vivid images – a woman pinned to the bed by a laser beam stabbing through her mouth; the baffling but intriguing opening with the android walking into a hospital and killing a man by crushing his skull and then setting itself on fire; Tom Atkins’s fight with an android, which keeps on fighting even after it is decapitated. John Carpenter also contributes another of his eerie scores.

Tommy Lee Wallace previously began as John Carpenter’s production designer on Halloween and The Fog (1980). Staying in the genre, Wallace wrote the screenplay for Amityville II: The Possession (1982), also for Dino De Laurentiis, and later went onto direct Fright Night Part 2 (1989), the Stephen King tv mini-series It (1990) and another sequel for Carpenter with Vampires: Los Muertos (2002). Wallace also produced The Fields (2011).