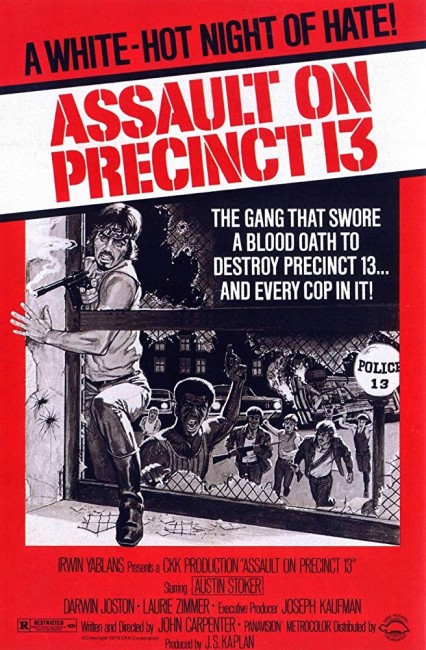 Police lieutenant Ethan Bishop is assigned to command the skeleton staff at a police precinct in L.A.’s Anderson ghetto on the last night before the station is due to close. Problems begin when a prison bus transferring a handful of convicts, including the notorious Death Row inmate Napoleon Wilson, has one of the prisoners fall sick while passing through the area. The officer in charge makes the decision to pull in to the precinct and place the prisoners in the holding cells until a doctor can be called. At the same time, gangs armed with a stolen cache of arms shoot a little girl as she steps up to an ice cream truck. Her father shoots one of them in retaliation and then seeks refuge in the precinct when the others come after him. The gangs surround the station, cutting off power and phones and then start sniping and trying to break in. Bishop and the two secretaries are the only ones to survive the initial onslaught. They are forced to enter into a tenuous truce with Wilson and the remaining prisoner in order to try and hold off the attacking gangs.

When it came to the making of Assault on Precinct 13, John Carpenter was handed a modest low-budget and carte blanche to make what he wanted. His initial idea had been to make a Western but the lack of budget precluded the period setting and so he came up with the idea of updating Howard Hawks’s classic Rio Bravo (1959). In Rio Bravo, sheriff John Wayne is forced to defend a jail against hired killers with the help of a cripple, a drunk, a gunslinger and a woman. Assault on Precinct 13 is simply Rio Bravo transplanted into an urban setting. (While John Carpenter has acknowledged the influence of Rio Bravo, you can perhaps also see the influence of Zulu (1964), an historical British film about the siege of a colonial outpost by a handful of British soldiers against thousands of Zulu warriors). At the same, the film that must also have been at the back of John Carpenter’s mind was George Romero’s modern horror classic Night of the Living Dead (1968) with its siege against hordes of zombies.

At times, Assault on Precinct 13 reads like a conceptual crosshatch between Hill St Blues (1981-7) and Night of the Living Dead. Indeed, much of Assault on Precinct 13 makes more sense when seen in terms of the conventions of a horror film than those of the action film. The gang members are just like Romero zombies – mindlessly attacking the station in the face of gunfire and seemingly indifferent to their own deaths. There is something spooky to the scene where Frank Doubleday keeps shooting at Martin West despite being hit and then acts surprised when he keels over dead. (Indeed, just like Michael Myers in Halloween, John Carpenter deliberately makes the gangs devoid of personality). There are many other resonances of Night of the Living Dead – the character who precipitates the action and then remains in a state of catatonic fear throughout; while Duane Jones, the decisive Black hero of Night, is spiritual progenitor to Austin Stoker. Carpenter also amusingly carps at Night and Romero’s existential lack of causes with Austin Stoker straightfacedly tossing off a line about the possibility that sunspot activity is causing the unrest.

Equally so, as much as Night of the Living Dead, Assault on Precinct 13 can also be seen in the context of the 1970s Backwoods Brutality film – the likes of Straw Dogs (1971), Deliverance (1972), The Last House on the Left (1972), The Texas Chain Saw Massacre (1974) – with the locale transferred from backwoods America to an urban ghetto. In all of these films, there is the sense of a desperate to-the-death struggle between civilised people and the elements of barbaric chaos baying at the door.

With Assault on Precinct 13, John Carpenter has set out to make an out-and-out fright film and succeeds considerably where many of his later bigger-budgeted films did not. The opening scenes smack of reduced economies – an alleyway attack has the police represented only by a pair of hands holding shotguns and the situation conveyed by a later voice-over. It is not until the shooting of the little girl that the full impact of the film hits. Carpenter gives us a scene where the hoods hold up an ice-cream truck, one of them toyingly forcing of a silencer barrel down the vendor’s throat, followed by the gang member’s casually shooting the little girl in the chest without hardly even looking at her. The calm emotionlessness and seeming indifference of the act is disturbing. It sets the pace and from that moment the low-budget shortcomings of Assault on Precinct 13 are forgotten – one knows that John Carpenter means business.

Assault on Precinct 13 soon evens out into a lean, compact, tightly wound nightmare. John Carpenter demonstrates a masterful economy of the situation, not to mention a considerable assurance of handling for a director making only his second film. He gets fine performances from Austin Stoker, Darwin Joston and Laurie Zimmer. More than anything, Carpenter creates a genuine tension out of the siege situation, particularly in conveying the frailty of the building as it is battered with a terrifying relentlessness. All casual assurances there might be in another film – the ammunition supply, the hope of outside help, a possible escape exit – are undermined, while a character like Charles Cyphers’ guard captain, who might have been the hero in any other film, is dispatched early in the game.

At times, Carpenter’s handling is artful – amid the terrifying torrent of high-velocity automatic fire, he finds an impassively observed poetry, watching the peculiar blossoms of files of paper being shredded by gunfire or bullet holes forming targeted circles on the windows. A strong and disturbing film.

The film was remade and substantially reworked as the interesting Assault on Precinct 13 (2005).