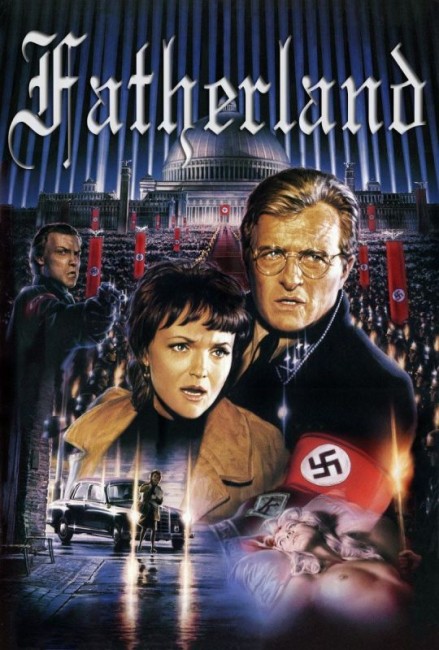 It is 1963. Following the failure of the D-Day invasion and the withdrawal of the US from the conflict, World War II ended with Germany triumphant. Most of Europe has been united into the grand Nazi empire known as Germania. Adolf Hitler needs to make allies with the United States in order to break the deadlock in his ongoing conflict with Russia. SS officer Xavier March is assigned to investigate after a body is found by a lakeside. He soon finds that the dead man was the architect of the ‘Jewish Resettlement Program’. As March investigates further, he discovers that all people involved with the resettlement of the Jews have turned up dead. His investigation now makes him a target as he threatens to uncover the most horrifying secret of the War.

In terms of full-fledged alternate history on screen, there was the superb It Happened Here (1965), which was similar to this in featuring a world where Hitler won the War and invaded England. There was also the little seen Quest for Love (1971), featuring an alternate world where JFK was still President and Vietnam had never occurred, as well as the The Tomorrow People (1973-9) story A Rift in Time (1974), which featured a Roman Empire that had never fallen, but that is it. After Fatherland we have seen a number of other stabs at using the Hitler Wins scenario – the films Philadelphia Experiment II (1993) and The 25th Reich (2012) and the Enterprise episode Storm Front (2004), even a puppet film Jackboots on Whitehall (2010). The most substantial of these were the tv series The Man in the High Castle (2015-9) and SS-GB (2017).

Subsequently, we saw some more substantial alternate history outings with the worthwhile White Man’s Burden (1995), set in a world where Blacks had become a racial majority and Whites a minority; tv’s Sliders (1995-2000), the less said about the better; the romantic comedy Yesterday (2019) set in a world where The Beatles never existed; and the finest of them all C.S.A.: The Confederate States of America (2004) set in a world where the North lost the Battle of Gettysburg and the US retained slavery to this day, and a sudden upsurge in 2019-20 with For All Mankind (tv series, 2019- ), Yesterday (2019), The Plot Against America (2020) and Noughts + Crosses (tv series, 2020- ).. In printed science-fiction, the alternate history is so familiar it has become an entire subgenre and the Hitler Wins scenario used here has become a cliche. Subsequent to Fatherland, the alternate personal history has been colonised by of all things the woman’s romantic fantasy, with the likes of Sliding Doors (1998), Twice Upon a Yesterday (1998) and Me Myself I (1999).

It is not certain why the alternate history has failed to take off on screen. One’s suspicion is this is due to the nature of its storytelling. The effect of the alternate history tale rarely lies in the narrative thrust of the story, rather in the accretion of background details – familiar historic people and events given different twists, logical extrapolations from given historic scenarios. Characters in alternate histories are rarely tourists in these worlds but live in them self unaware – the recognition of the alienness of their world is all down to us. Crafting such as a film is a more complex intellectual game than audiences are usually used to.

Fatherland has the good sense to be based on Robert Harris’s 1992 novel, the best alternate history story written in recent years, certainly the best of the Hitler Wins scenarios. The book was written by Robert Harris who is a novelist and non-fiction writer who usually specialises in the Nazi era – other his books have also been adapted into the mini-series Selling Hitler (1991) about the Hitler Diaries hoax, Enigma (2001), the mini-series Archangel (2005) about uncovering secrets from the Stalin-era Soviet Union, and the Roman Polanski film The Ghost Writer (2010). The book is a breathlessly exciting read. It evokes a genuine sense of clammy claustrophobia, of the Nazi nightmare taken to its logical fruition. Robert Harris put an extraordinary degree of research into the book – most people do not realise that many of the characters in the book were real people.

However, the film remains considerably less than the book. Robert Harris’s plot is there more or less but the film has hacked it about, pointlessly rearranged it. (The only apparent reason for this has been to introduce Miranda Richardson’s American journalist from the outset rather than halfway through the story). The book’s intensive pace has become more like a pedestrian plod from one plot point to the next.

Worse comes the film’s decision to add a big, upbeat ending. The climactic meeting between American President Joseph Kennedy and a poor Hitler look-alike is badly misjudged. Harris realised the difficulty in using Hitler as a dramatic character and wisely kept him offstage throughout the book, but the film never sees that. Moreover, the scene is heavily lacking in plausibility. One fails to believe a mere journalist could succeed in getting through an armed cordon (let alone a Nazi one) to a Presidential motorcade or that the President would cancel an international summit meeting on the basis of a series of photographs without even asking their authenticity, and that this would cause the downfall of the Nazi Empire. The scene also ends up exonerating Kennedy – completely the opposite of what Robert Harris tried to do with Joseph Kennedy in the book, where he pointed to Kennedy’s anti-Semitism and hinted about his possible complicity in the Holocaust.

Equally misjudged is the scene where March’s son informs on him to the Gestapo. The film turns him into just an average kid trying to do what he thinks best and then lets him off the hook in the end voice-over. It was far scarier in the book when the kid just went and turned his father into the Gestapo without any quandaries of loyalty.

Nevertheless, there are some places when the film does work. The novelty of the idea is good – I mean, where else could you find a film in which the hero is an SS Officer? Christopher Menaul, director of the acclaimed British mini-series Prime Suspect (1991) and other works like The Passion of Ayn Rand (1999), Secret Smile (2005), See No Evil: The Moors Murders (2006) and Killing Jesus (2015), is good at littering the background with tiny unmentioned details that build to the picture of a whole as a good alternate history should. Billboards proclaim the ghastly, treacly Nazi wish for duty to family and fatherland or advertise Die Beatles (although it is does not seem entirely credible that a country opening is borders to the free world for the first time would be advertising such ‘decadent’ music); and the effective visualisation of Albert Speer’s Berlin. The opening montage sequence cleverly uses actual historical photos to give a capsule breakdown of the alternate world history since World War II – the death of Winston Churchill in exile in Canada and the loss of the War, the ongoing war with Russia. This is what alternate history is all about and it is easily the best part in the entire film.