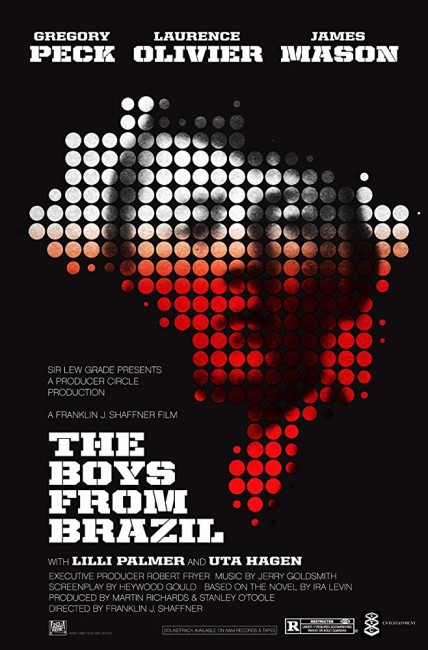 Aging Nazi hunter Ezra Liebermann receives a phone call from eager young admirer Barry Kohler. Kohler has bugged a conference held in Paraguay by the infamous Nazi doctor Josef Mengele wherein Mengele has assigned a group of Nazi assassins to kill 94 sixty-five year old civil servants all around the world over the next two-and-a-half years. The killings must appear as accidents – the future of the Third Reich claimedly hangs on the success of the mission. However, Mengele tracks down and kills Barry before he can tell Liebermann everything he has heard. Liebermann starts investigating the deaths of all sixty-five year old men the world over. At first, he finds nothing but then makes the remarkable discovery that some of the killed men have identical adopted sons. As Liebermann investigates further, the true extent of Mengele’s scheme becomes apparent – that Mengele has cloned 94 copies of Adolf Hitler and is now trying to recreate the events of the Führer’s childhood, wherein Hitler’s civil servant father was killed at the age of 65, in order to replicate the Führer’s psychological makeup.

By the 2000s, the Nazis had gained substantial life in genre films with the likes of Outpost (2007) and sequels, Bloodrayne: The Third Reich (2011), Iron Sky (2012) and The 25th Reich (2012), among others. Amid these, Dr Mengele took on the life of a mad scientist as in Werewolves of the Third Reich (2017) and Stay Out of the Fucking Attic (2020), while Nazis at the Center of the Earth (2012) also featured Dr Mengele as a villain (having reattached Adolf Hitler’s head to a robot body). (For greater detail see my essay Nazis in Fantastic Cinema.).

Ira Levin is in a class of his own but must have been aware if not parodying these movies when he wrote The Boys From Brazil (1976). Levin always has the ability to swing plots that in the recounting hinge between the audacious and the absurd – a woman comes to believe she is impregnated by The Devil (Rosemary’s Baby), a housewife comes to believe that the men in her town are replacing their wives with android duplicates (The Stepford Wives). Levin always managed to swing the inherent audacity of his plots with a series of scintillatingly clever turns – one can reach the end of an Ira Levin book and almost imagine Levin sitting with an irrepressible smile at his own smartness.

However, with the exception of Rosemary’s Baby, filmmakers have failed to duplicate Ira Levin’s dazzling conceptual juggling game. The Boys From Brazil is a passable adaptation that at least conveys Levin’s story adequately. Part of the problem with The Boys From Brazil was that it was mounted as a 1970s A-budget thriller. It is thus unfortunately lumbered with an overacting star cast and a parade of luxurious international scenery – the action takes place against the backdrop of bullfights or with figures dwarfed as they converse atop a vast dam.

Director Franklin J. Schaffner had made the fine likes of Planet of the Apes (1968) and Patton (1970) but seemed to lack the same touch here. The very size of the production tends to drown out the thriller elements, and here the tightness of Ira Levin’s plot turns only become secondary to proceedings. [Nevertheless, re-viewing the film again a few years later and having forgotten much of the book, which seemed much superior the first time I saw the film, the plot moves with a reasonable slickness].

If nothing else, The Boys From Brazil becomes the first ever science-fictional depiction of cloning where the cloning is scientifically realistic ie. where the clone does not pop into being as an instant adult with a full set of its donor’s memories but where the story takes into account that the clone would grow at a normal rate and would need to replicate the social conditions in order to approximate the donor’s personality.

Played out with such big-budget momentousness, the insouciant lightness of Ira Levin’s writing cannot help but spill over into silliness. And rather silly it gets too, most notably in the acting – how Laurence Olivier, all patently theatrical quavering voice and prissy mannerisms, managed to earn an Academy Award nomination for his role in the film is a big mystery. Gregory Peck, in what was announced as his first villainous role, is the opposite extreme – his face is so stolid it appears to have been cast in wax. The implacability has a certain effect but when Peck tries to go berserk, the effect is so odd it is laughable.