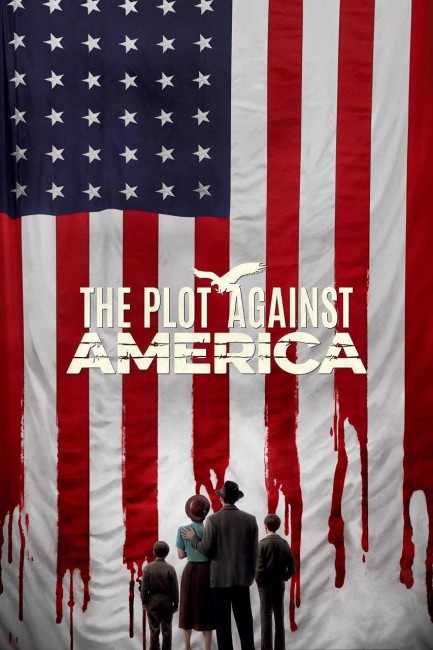 Newark, 1940. Herman Levin reacts with dismay at the populist rise of aviator Charles Lindbergh who has made no secret of his Anti-Semitic views. Lindbergh then announces he will stand for President on a policy of keeping the US out of the war with Germany that is currently engulfing Europe. Evelyn Finkel, the sister of Herman’s wife Bess, becomes involved with Rabbi Lionel Bengelsdorf who makes a public stand in favour of Lindbergh, saying that Lindbergh is not a Nazi and does not support the anti-Jewish policies of Hitler. This is instrumental in Lindbergh winning a landslide election victory over Roosevelt. Herman’s nephew Alvin flees to Canada and signs up to serve in the war, only to end up with his leg blown off. Upon returning to the US, Alvin finds himself accused of being a Communist for violating the US’s non-involvement policy and resultingly backlisted from employment. After criticising Bengelsdorf, the Levins are then selected as participants in the newly introduced Homestead 42 Act to relocate Jewish families in the American heartland. Herman is forced out of his job and required to relocate to rural Kentucky. All around them, they see Anti-Semitic sentiment grow.

The title The Plot Against America suggests some lunatic fringe conspiracy documentary about the Deep State and/or Obama/Hillary and their plans to institute a dictatorship that you might find floating around YouTube, probably presented by Alex Jones. Nothing could be further from the truth and The Plot Against America is actually a mini-series in six one-hour parts that ventures into the theme of Alternate History.

The alternate history is a flourishing genre on the printed page, which imagines all manner of scenarios, ranging from those in which the Nazis win World War II, the dinosaurs never died out, Kennedy and Lincoln were never assassinated to more fanciful takes. The first alternate history to appear on screen was the film It Happened Here (1965) set in an England that had been conquered by the Nazis. There have been sporadic other alternate history scenarios throughout the years – Quest for Love (1971), featuring an alternate world where Kennedy was still President and Vietnam had never occurred; Fatherland (1994) set in a world where Germany won World War II; White Man’s Burden (1995) set in a USA where Blacks had become a racial majority and Whites a minority; C.S.A.: The Confederate States of America (2004) set in a world where the North lost the Civil War and the US retained slavery to this day; and Yesterday (2019) set in a world where there was no Beatles. (For more in-depth discussion of the genre see the Theme Essay Alternate History Films).

In more recent years, the alternate history has gained traction on tv screens. There was the popularity of the tv series The Man in the High Castle (2015-9) set in a USA that had been divided into two halves by Nazi and Japanese occupying forces. A much better treatment of the Nazi-rule theme was conducted with the British mini-series SS-GB (2017) depicting England under Nazi occupation. Elsewhere we had the tv series For All Mankind (2019- ) that offers an alternate depiction of the US Space Race if the Russians had beaten the Americans to The Moon, and Noughts + Crosses (2020- ) set in an England that has been colonised by Africa and whites are an underprivileged minority.

The Plot Against America (2004) was a novel written by Philip Roth (1933-2018). Roth gained considerable critical acclaim during his day with works like Goodbye Columbus (1959), Portnoy’s Complaint (1969) and The Human Stain (2000), among others. Roth’s work has won National Book Awards and the Man Booker Prize. Various of his books have been adapted to the screen, although The Plot Against America is the only work that enters into genre territory. Roth wrote the book partially based on his own childhood growing up in Newark and the prejudice he faced as a Jewish child – there is a character of Philip in the story who is around the same age that Roth would have been, while the Levin family has many similarities to Roth’s own.

Roth based much of his scenario on the real-life figure of Charles Lindbergh (1902-74). Lindbergh was an unknown U.S. Air Mail pilot when in 1927 he made the first solo Transatlantic flight from New York to Paris. This made Lindbergh into a national hero and he toured extensively in the years after. On one such tour to Germany in 1938, he was awarded a medal by Herman Goring. During World War II, Lindbergh remained an ardent opponent of the US’s entry into World War II and was a spokesperson for the non-interventionist America First Committee. What has become of considerable controversy then and since is Lindbergh’s view on race with he speaking out against the Jewish people many times. Debate has existed from various historians as to whether he was a pro-Nazi sympathiser – there were a number of occasions where he argued that Hitler was not a threat. Lindbergh and Henry Ford were friends in real life and apparently when together constantly discussed what they considered the malign influence of Jews.

This is a tv mini-series based on Roth’s book, which aired on HBO in six one-hour episodes. It was adapted by David Simon and Ed Burns, respectively a journalist and a retired police officer, who wrote the non-fiction book Homicide: A Life on the Streets (1991) and then adapted it as the award-winning tv series Homicide: Life on the Streets (1993-8). The two went on to create the acclaimed tv series The Wire (2002-8) and Simon on his own created Treme (2010-3) and The Deuce (2017-9). Philip Roth is listed as an executive producer, despite having died two years before the mini-series aired.

The Plot Against America is a beautifully filmed show. As in Simon’s The Deuce, a great deal has been expended on the background such that the buildings, clothes, cars all feel so lived in you could really step through the screen and smell and touch them. The cinematographic palate gives them a beautifully crisp clarity that makes it seem as though you were looking straight out the window.

As opposed to most alternate history works, Burns and Simon don’t immediately dive into depicting the variations on history. For at least the first two episodes, the mini-series does nothing to concern itself with the historic backdrop but rather engages us with the characters and their day-to-day lives. There is intent in this as each of the slices of everyday drama we see becomes like a piece on a chessboard that are being moved into position to play out later in the wider context of the big story.

The mini-series starts to gain its dramatic feet at the end of Episode 2 as John Turturro’s rabbi delivers his speech with great flourish, before the cut away to Morgan Spector bringing home the ramifications of what it means. We see the country’s slow unobtrusive slide into Anti-Semitism – the rejection from the hotel in Washington D.C., the angry confrontation with a man in a diner. Then comes the introduction of the Homestead 42 Act and the gasp you make as John Turturro lists a long line of still-existing companies that support its policies including Coca-Cola, IBM and General Motors, among others. The mini-series shows little of Charles Lindbergh other than as a distant figure speaking – his wife actually gets far more screen time than he does – but has no compunction in depicting Henry Ford as a major asshole.

It is Episode 6 where all the chess pieces come together with enormous effect that makes for riveting drama – the scenes with Sheldon on the phone and the extraordinary journey back from Kentucky with the incredibly vivid image of Morgan Spector stopped on the highway by a member of the KKK in full regalia while a building burns in the background.

All of the performances are fine but the person who ends up stealing much of the show is John Turturro in an incisive performance – all delivered in a Southern accent. Zoe Kazan has a mousy anonymity for much of the show but there are moments she unexpectedly shows her mettle, particularly the scenes in Episode 6 where she has to get Sheldon to help himself – all of which is delivered while on her knees talking into a phone.

Indeed, the most emotional moments in the mini-series come with the character of Sheldon (Jacob Laval). The show pulls all the heartstrings it can when it comes to Sheldon – he is young, has a high pitched voice register and appears to have some neurodiverse spectrum social developmental issues. There are the wrenching moments where we suddenly learn the Wishnows are now being relocated after Caleb Milis’s innocent question to Winona Ryder about having a friend to join them and a guilty Caleb pushing his stamp collection onto the departing Jacob Laval. The scenes in the final episode where Sheldon calls Zoe Kazan because his mother hasn’t come home and her efforts to talk him down are some of the most heart-wrenching of anything you will see this year.

Roth wrote the book during the George W. Bush presidency but Burns and Simon are not in the slightest bit hoping that people will draw connections between Charles Lindbergh and the US’s current orange-haired president. You might be ever so slightly mistaken in drawing connections between Lindbergh’s statements against the Jewish people and Trump’s targeting of Mexicans; between the policies of relocating families and of children locked in cages; between KKK in the streets and armed militia groups marching and occupying government buildings; between Lindbergh’s refusal to disavow mob violence and Trump’s “very fine people on both sides.”

I enjoyed The Plot Against America as an alternate history. While Roth, Simon and Burns place the focus on a Jewish community, my question would be is what happens to the other disadvantaged racial minorities – Blacks, Latino – in this timeline. Of that we get no mention at all. I would find it hard to believe in an America so polarised along racial lines as we see here that other groups would not have been affected as they very much were in real-life. It is worth remembering that it was only towards the end of the period where the mini-series takes place that in the real world Japanese-Americans were being locked up by the far more liberal government of Franklin Delano Roosevelt.

This of course leads one to the natural question of what happened to Pearl Harbor in this timeline. In our timeline, the US’s involvement in World War II was not too much different than it was here outside of Lend-Lease and it was only the Japanese attack in 1941 that brought the US into the War. So I didn’t quite understand why it was that Japan does not attack in this timeline. It would have been intriguing to see how a President like the fictionalised Lindbergh we have here who came in on a policy on non-involvement in the War would have responded to Pearl Harbor.

The end of the show perhaps does come a little Utopian. [PLOT SPOILERS] It sees Lindbergh mysteriously disappearing and Anne Morrow Lindbergh standing up in her husband’s stead, disbanding the changes and National Guard (all seemingly without the backing of any acts of Congress). Anne was someone who in real-life supported her husband’s views and was politically active but whether she had such political acumen and ability to wield it is a big question. The mini-series almost puts her into the position of Fairy Godmother waving her wand and setting things aright, while the series goes out with the implication that Roosevelt will probably be voted in and the timeline restored. What would have been far more interesting to me as a reader of alternate history would have been to follow through to the present-day and depict what kind of changed world we might have had as a result of a Lindbergh presidency.