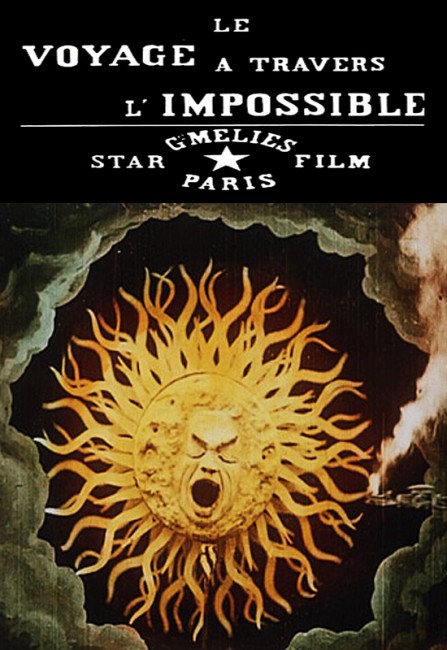 Engineer Kasilov stands up before the Geographic Society to unveil his ambitious plan for a vehicle that is a combination train, automobile, dirigible and submarine. He receives an enthusiastic response and construction begins. The vehicle is launched and begins a journey across the Alps, only for the car to crash into a crevasse and hospitalise members of the expedition. They continue onwards aboard the train. Thanks to the attached dirigibles, the train lifts off from the mountainside and travels through space, before crashing into the mouth of the sun. The members of the expedition seek refuge inside an icebox they have brought along but end up being frozen into a block of ice, before being thawed out and making a return to Earth in the submarine.

An Impossible Voyage was one of the films from early French film pioneer Georges Melies (1861-1938). Melies was originally an amateur magician who jumped upon the novelty of the movie camera soon after the Lumiere Brothers made the very first film in 1895. In almost no time, Melies discovered special effects trickery. This came about by accident when his camera jammed one day – when playing his footage back, the jump in the film appeared to make an object vanish. Melies quickly began experimenting with stop-action camera effects. His first such film was The Lady Vanishes (1896) in which he appears as a conjuror and makes a lady disappear in a puff of smoke. Melies’s films rapidly started to progress in sophistication and he discovered many of the modern special effects tricks – animation, superimposition, split-screen, miniatures, even the fade and the dissolve. He also built the first ever movie studio – which had only a single set – in his country garden in Montreuil. Melies made some 500 short films between 1896 and the eventual bankruptcy of his studio in 1914.

The film that Georges Melies will always be associated with is A Trip to the Moon (1902). It is an undeniable classic and its position has had Melies labelled the father of the science-fiction film. An Impossible Voyage was Melies’ successor to A Trip to the Moon and is a point where he was operating at the absolute height of his technical skill and artistry. Considering the primitiveness of filmmaking techniques during the day, the inventiveness of what he pulls off is extraordinary.

Georges Melies can be compared to his countryman and contemporary Jules Verne – indeed, Melies often borrowed freely from Verne, using Verne’s From the Earth to the Moon (1865) as the basis of A Trip to the Moon and conducting his own version of 20,000 Leagues Under the Sea (1907). Verne gained prominence by creating a series of adventures based on the new modes of transport that were just opening up in the Victorian era – of journeying across Africa by balloon in Five Weeks in a Balloon (1863) or the round the world trip in Around the World in 80 Days (1873) – or coming up with entirely new ones of his own – the idea of the submarine in 20,000 Leagues Under the Sea (1870); going to the Moon by being shot out of a cannon in From the Earth to the Moon; of the warlike possibilities offered by the airship in Robur the Conqueror (1886) and Master of the World (1904).

Melies borrowed from many of these and created his own voyages extraordinaire in a similar vein to Verne. An Impossible Voyage is a case in point – the film seems construed as an amalgamation of all the new and exciting modes of transport that were suddenly arriving around the turn of the century – the train, the motor car, the dirigible airship, the still speculative ideas of the submarine and space travel. These have all been implausibly combined into one and the combination vehicle we see looks absurdly improbable – a train that buzzes along on its rails with two dirigibles attached above it at either end, for instance.

For its era, An Impossible Voyage is an amazingly sophisticated work. The design that has gone into it is amazing – this is true Steampunk back during the era where such was Victoriana’s fantasies of how technology would be rather than modern writers looking back with foreknowledge of how everything did turn out. The sophistication of some of the model work – in particular of the train passing along a bridge on its tracks or zipping up the mountainside – is extremely good. Melies even goes so far as to build cutaway sets of the interior of the train – especially clever being those of the submarine, which are constructed in a way to allow a view into two different compartments showing the drama as a fire breaks out in the engine room.

The film’s most imaginative and science-fictional scenes come when the train takes off from the mountainside and flies off into space. Melies has it passing stars, planets and comets before impacting into the mouth of the Sun. (Melies’s films, despite being cited as works of early science-fiction, more often sit as fantasy films in their depiction of The Moon and Sun with personified faces – one will not even bother discussing seriously the idea of humans being able to walk on the surface of the sun whereas in reality they and their craft would be incinerated before they even came within a few million miles). The sophistication of special effects techniques that depicts all of this is quite extraordinary.

Georges Melies was always an entertainer first and foremost. At heart, Melies’s films though were little more than glorified magic shows. Amid all of his discoveries Melies, for example, never discovered the concept of moving his camera. Films made during this era had not even yet discovered the idea of editing or breaking a scene up into closeups or multiple shots and so all of the scenes in Melies’s films take place in wide-angle master shots. His shows were exactly like stage shows where the camera remained in a fixed position in exactly the same place that the audience would sit and the trick effects would take place on the stage before it.

His marvels here are also undercut by a frequent slapstick element – scenes with the engineer kicking an obsequious servant who brings in a tray while he is working; the members of the expedition being clonked and knocked over in their rush to get aboard the departing train; the car crashing into and driving all the way through the dining room of an Alpine lodge; the slapstick chaos of the members of the expedition in their hospital beds. Especially cute are the scenes on the sun’s surface where the explorers try to hide from the heat by getting into an icebox (that has conveniently been brought along on the train) only for the explorer to open the door and find they have all been frozen into a single block of ice.

For a more detailed discussion of other Georges Melies films, see Melies Cinemagician (2011) and the documentary The Extraordinary Voyage (2011).