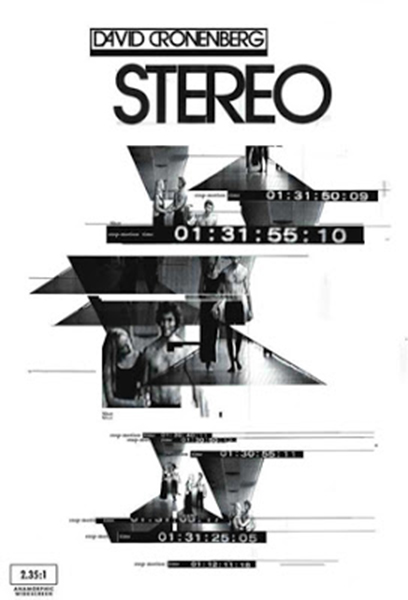 Stereo was the very first film of Canadian director David Cronenberg who of course went onto become an internationally celebrated director. Cronenberg started out making very abstract experimental films with Stereo here and the subsequent Crimes of the Future (1970) but soon found more commercial expression in the horror genre with works such as Shivers/They Came from Within (1975), Rabid (1976), The Brood (1979) and Scanners (1981), among others. From about Dead Ringers (1988) onwards, Cronenberg began to leave easy genre confines behind. His works of the 1990s returned to this experimentalism in the likes of Naked Lunch (1991), Crash (1996) and Spider (2002), although these were greeted with far more widespread acclaim than his earliest works. In more recent years, Cronenberg has abandoned genre territory and experimentalism altogether with more mainstream works like A History of Violence (2005), Eastern Promises (2007) and A Dangerous Method (2011). A steady theme through much of Cronenberg’s work is with strange and perverse means of sexual expression.

Stereo is a fascinating artifact. Many genre historians have contrasted it to the similar experiments in psychic powers that take place in Scanners, although one suspects that these comments were written by people who had never seen and only read about Stereo, which remained extremely obscure and largely unseen until its dvd release in 2005. In reality, the two films could not be further apart in terms of approach – Stereo is arty, experimental, comes couched in the dry tones of a mock scientific enquiry; whereas Scanners by contrast is a dramatic film, commercially focused and centred around some then cutting edge makeup effects.

Stereo is interesting to watch in the hindsight of Cronenberg’s subsequent forty plus years as a filmmaker. (Lord knows what audiences watching the film back in the day would have made of it – it is such a bizarre deadpan effort lacking in any easy handholds to clue one in as to what is going on). There is the fascination with ultra-modern architecture that occupies Cronenberg’s early films – Crimes of the Future, Shivers – of people living inside alienating modern high rises of glass and concrete.

Stereo was shot at the University of Scarborough – one of the satellite campuses at the University of Toronto where Cronenberg had graduated with a degree in English Literature in 1967 – which is all glass architecture, jutting exposed concrete buttresses in the hallways, expansive lecture theatres and dining halls. It is filmed in a way that the place looks exactly like the cool detached scientific laboratory that Cronenberg claims it is rather than a regular university.

In his earlier genre works at least, Cronenberg has a love of mad science and the monsters produced by it but constantly treats the scientists with sympathy, showing them welcoming the process of infection and transformation into the monstrous. Ron Mlodzik was the very first of these scientists. By contrast to the modernism that permeates the rest of the film, Cronenberg outfits Mlodzik as though he had just stepped out of a Hammer Frankenstein film – in cape, 19th century formal wear, cane, and later a tunic, and working in an office/dormitory that is festooned with religious icons.

There is no plot to the film. It just consists of various scenes of people wandering around the institute. Nothing dramatic happens. Oddly – and certainly in diametric contrast to Scanners – there is not even any demonstrations of psychic powers in action or evidence of communication between the experimental subjects. It seems that Cronenberg is more interested in the dry parody of academia than he is in the actuality of the powers. It certainly makes for a film that is slow going – even though Stereo only has a 65-minute running time.

To make things even stranger, Cronenberg shoots the entire film without any location sound. There are long sections that are completely soundless for several minutes at a time – no dialogue, not even any sound effects or musical score. The soundtrack has only been added in post production and consists of dull anonymous voices that describe everything in the tones of a scientific paper. Here Cronenberg is clearly parodying the obtuse jargon of the science degree he started out studying and has the greatest delight in using very long-winded and important sounding pieces of technical terminology to describe what is happening. All of which makes for a film that enters into what in the 1960s – and still is today – incredibly experimental territory. A lot of people do not get the very oblique, very dry sense of black humour in Cronenberg’s films and his parodying of the language and formalism of academia is really quite a funny joke.

Equally, Stereo makes for one of David Cronenberg’s wildest films. Sexuality seems to underline and concern a great many of his films. Towards the end, he gives us scene where Ron Mlodzik and both a male and female subject start making out. First of all, the scenes with two guys kissing were pretty out there and edgy stuff for 1969 where homosexuality was still a crime in many Western countries (and had only just been decriminalised in Canada). The utterly striking voiceover then starts to talk about how heterosexuality and homosexuality are regarded as perversions and that true human sexuality is bisexuality, which is a fairly wild and out there claim to make for 1969 – even still is today.

You get the impression that much of the style of the film was formed by the means of shooting – that Cronenberg and his crew shot in the grounds of the university and didn’t have official permission. Cronenberg stated the reason for the lack of soundtrack was that the camera he was using made too much noise and so the soundtrack was composed entirely in voiceover later. He also makes the amusing statement about how he obtained funding for the film by applying for a government grand to write a novel.

David Cronenberg’s other films are:– Crimes of the Future (1970) set a future where people have become sterile and developed strange mutations; Shivers/They Came from Within (1975) about sexual fetish inducing parasites; Rabid (1977) about a vampiric skin graft; The Brood (1979) about experimental psycho-therapies; Fast Company (1979), a non-genre film about car racing; Scanners (1981), a film about psychic powers; Videodrome (1983) about reality-manipulating tv; The Dead Zone (1983), his adaptation of the Stephen King novel about precognition; The Fly (1986), his remake of the 1950s film; Dead Ringers (1988) about two disturbed twin gynaecologists; Naked Lunch (1991), his surreal adaptation of William S. Burroughs’ drug-hazed counter-culture novel; M. Butterfly (1993), a non-genre film about a Chinese spy who posed as a woman to seduce a British diplomat; Crash (1996), Cronenberg’s adaptation of J.G. Ballard’s novel about the eroticism of car crashes; eXistenZ (1999), a disappointing film about Virtual Reality; Spider (2002), a subjective film takes place inside the mind of a mentally ill man; the thriller A History of Violence (2005) about an assassin hiding from his past life; Eastern Promises (2007) about the Russian Mafia; A Dangerous Method (2011) about the early years of psychotherapy; Cosmopolis (2012), a surreal vision of near-future economic collapse; the dark Hollywood film Maps to the Stars (2014); and Crimes of the Future (2022) set in a future world of surgical performance art. Cronenberg has also made acting appearances in other people films including as a serial killer psychologist in Clive Barker’s Nightbreed (1990); a hitman in Gus Van Sant’s To Die For (1995); a Mafia head in Blood & Donuts (1995); a member of a hospital board of governors in the medical thriller Extreme Measures (1996); as a gas company exec in Don McKellar’s excellent end of the world drama Last Night (1998); and a priest in the serial killer thriller Resurrection (1999); and a victim in the Friday the 13th film Jason X (2001).