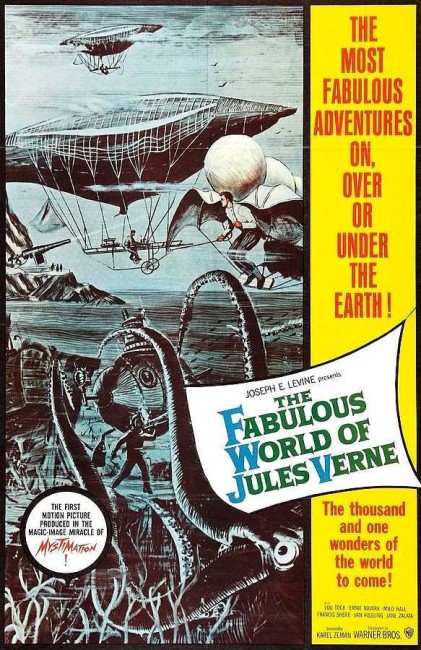 It is the 19th Century where new modes of travel such as rail, the Transatlantic steamer, the airship and submarine are becoming widespread. The engineer Simon Hart travels to see Professor Roch who is engaged in research on a powerful new explosive. That night, pirates led by Captain Spade break in and abduct Roch and Simon. They are taken by submarine to the pirates’ secret base on Back-Cup Island, which can only be accessed by an underwater tunnel. Along the way, a shipwrecked woman Jana is also picked up. There Professor Roch is forced to create his explosive for Count Artigas who has world domination plans. Simon takes every opportunity to try and escape and get word out to the nations of the world.

Karel Zeman was a Czech animator who is not widely known in the West. Zeman has however gained a small cult for his films, which contain amazing blends of animation and live-action. Zeman’s films, which frequently draw on the works of Jules Verne, include A Treasure of Bird Island (1953), Journey to the Beginning of Time (1955), Baron Munchausen (1962), A Jester’s Tale/War of Fools (1964), The Stolen Airship (1967), On the Comet (1970), Tales of 1001 Nights/The Adventures of Sinbad the Sailor (1974), The Sorcerer’s Apprentice (1978) and The Tale of John and Mary (1980).

A Deadly Invention is the most famous of Karel Zeman’s films in English-speaking countries. This was largely due to the fortuitousness of its timing. Zeman conducted an adaptation of one of the more obscure Jules Verne novels Facing the Flag (1896). A Deadly Invention came out just after US mainstream cinema had had the big hits with Disney’s adaptation of Verne’s 20,000 Leagues Under the Sea (1954) and the MGM Around the World in 80 Days (1956), which won the Best Picture Academy Award in its year.

This created a spate of other Jules Verne adaptations over the next few years with the likes of From the Earth to the Moon (1958), Journey to the Center of the Earth (1959), Master of the World (1961), Mysterious Island (1961), Valley of the Dragons (1961), Five Weeks in a Balloon (1962), In Search of the Castaways (1962), Jules Verne’s Rocket to the Moon/Blast Off/Those Fantastic Flying Fools (1967), The Light at the Edge of the World (1971) and The Mysterious Island of Captain Nemo (1972). Amidst this, US distributor Joseph E. Levine achieved a reasonable degree of success by cannily retitling A Deadly Invention as The Fabulous World of Jules Verne.

What amazes everybody who sees The Fabulous World of Jules Verne is its extraordinary visual originality. Karel Zeman has set out to reproduce the look of the original woodcuts and lithographs in Verne’s Voyages Extraordinaire as illustrated by Leon Benett, Alphonse de Neuville, Edouard Riou and George Roux. Zeman sets out to replicate not just the designs but the very texture of the illustrations so that the ocean waves, the skies or the background of buildings are filled with the same rippled or grainy lines that are characteristic of the lithographs. The look is unique and unlike anything you have seen before. It is a film that veritably cries out for a colour treatment, although in that the original lithographs were in black-and-white, this also seems perfectly suited the way it is.

Zeman also conducts the mix of animation and live action in a way that leaves you in a constant state of amazement – even over fifty years later when such has become commonplace due to the CGI revolution. You constantly get a fix on what you think you are looking at – that a particular set or group of figures is drawn or animated as the surroundings clearly are, only for Zeman to show people moving inside or that they are walking through sets, leaving you not at all sure what is animated and what is a three-dimensional set. Zeman’s willingly keeping us suspended in this state of uncertainty about what we are seeing is something that approaches genius.

The Jules Verne adaptations of this period were prototypic of what was called Steampunk about four decades later – a fad in retro science-fiction that creates an imagined era of Victorian technology and later a real world subculture and fashion sense derived from it. Among these, The Fabulous World of Jules Verne is perhaps the purest evocation of Steampunk put on screen. Karel Zeman gets down perfectly the dizzyingly nonsensical devices and contraptions that became the essence of many of the Steampunk writers and illustrators in later decades.

The film is filled with marvellous inventions – especially the opening scenes where hero Lubor Tokos sets out to sea and marvels at the world around him where we see such wonderful inventions as submarines and bicycle-pedalled airships. Elsewhere we get submarines that are propelled by fin-like paddles, divers moving through the underwater depths on bicycle-propelled torpedo devices, the villain (Miroslav Holub) wielding a hand-cranked machine pistol and glorious animated vistas of vast flywheels buzzing and pistons pumping.

The most deliriously enjoyable sequence is the one where the hero makes an escape in a diving suit through an underwater scenario that is a mix of highly stylised animation and live-action, before he is rescued by a squat submarine with finned paddles that sneaks in through the tunnel where it is then engages in combat with the villain’s lethal needle-like submarine. The blend of effects techniques and love of turn of the century Vernian Steampunk surely makes Karel Zeman the modern inheritor of Georges Melies.

Zeman conducts a reasonably faithful if simplified adaptation of the original Jules Verne novel Facing the Flag. As Lubor Tokos’s narration at the start indicates, the film seems to take place in a universe where all of Verne’s characters lived with Tokos speaking of Captain Nemo, Barbicane and Robur as the great inventors and explorers of the age. Scenes like where the submarine rams the other vessels are very much modelled on 20,000 Leagues Under the Sea (a scene that we never actually saw happen in the Disney version of the film).

There is also a wonderfully droll sense of humour that runs through the film. Zeman nails perfectly the sense of unflappable calm in the midst of chaos that is the essence of Victorian propriety – the gentleman on the train whose newspaper is shot through by a gun blast and carries on reading as though nothing had happened; Jana Zatloukalova casually airing out her wet clothes on the barrel of a cannon and using a heated ramrod as an iron; the crane that turns and delicately picks up the engineer (Vaclav Kyzlink)’s dropped pencil and hands it to him; or the perfect moment where the hero scales the villain’s castle wall, tries to enter through Jana Zatloukalova’s bedroom window but is made to climb back down to the ledge below so that she can get dressed before he comes in. A film that almost approaches pure art in its very uniqueness.