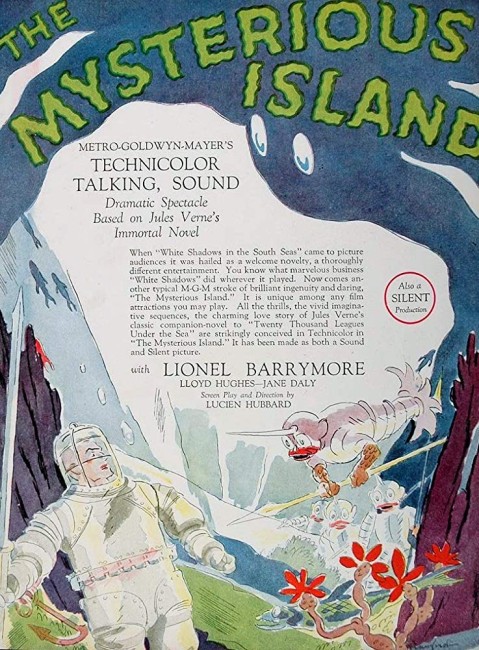 Prince Dakkar is the benevolent ruler of Mysterious Island. He has designed and overseen the construction of two submarines. The island is now invaded by Baron Falon and his Hussars who take Dakkar’s daughter Sonia prisoner in an effort to get his secrets. Sonia is rescued but she, Falon and his soldiers are trapped aboard one of the submarines. Meanwhile, Dakker and his men submerge in the other submarine where an explosion damages the ballast tanks, meaning they are unable to surface. They descend to the seafloor where the submarine is drawn into the underwater city of a race of merpeople.

Jules Verne wrote Mysterious Island (1874) as a sequel to Twenty Thousand Leagues Under the Sea (1870). It is important when it comes to considerations of the film versions of the book to look at exactly what Mysterious Island is about. Verne’s story concerns five Union prisoners during the American Civil War who make an escape by stealing a hot-air balloon, only to be caught in a storm and washed up on a desert island. Thanks to incredible ingenuity (and an engineer in their midst), they are able to build most of the amenities of civilisation while there, including creating brick and ceramics, smelting iron, building a home and a ship, even a telegraph. At various intervals, they receive mysterious aid, which in the concluding chapters is revealed to be from Captain Nemo who is in hiding on the island. In the story, Verne depicts Captain Nemo as an old man and gives his backstory as the Indian Prince Dakkar. It is also crucial to note that the only science-fiction element in the original book consists of Nemo’s submarine.

When it comes to the various film adaptations of Mysterious Island (which actually outnumber the versions made of Twenty Thousand Leagues Under the Sea), it frequently seems that the quintessential desert island adventure that Verne told is not enough for filmmakers. Most films at least keep at least one or other of the basic elements – the Civil War setting, the Northern prisoners escaped in a hot-air balloon, survival on the island, Captain Nemo – some more of these than others. What is most noticeable is the number of considerably more fantastic elements that have entered into the other versions, including most commonly giant animals and insects, as well as alien invaders, time warps, troglodytes, doomsday weapons, the island being the location of Atlantis and so on.

To all accounts, the 1929 version of The Mysterious Island was a troubled production. It went through at least three different directors. The credited director and writer is Lucien Hubbard who does not seem to have directed many other films but has a number of credits as a writer and producer from the 1910s through to the 1940s. Far more interesting are the uncredited directors, which include Maurice Tourneur, a celebrated French-born silent film director known for works that include versions of Trilby (1915), The Blue Bird (1918) and The Last of the Mohicans (1920), and Danish director Benjamin Christensen, who made the cult silent witchcraft pseudo-documentary Häxan (1922) and came to Hollywood to make a number of films including the fascinating Seven Footprints to Satan (1929).

The Mysterious Island started production in 1926 but was not released until 1929. Of course, what had happened in the three years in between was the advent of sound cinema with The Jazz Singer (1927). As a result, MGM were stuck with a film that had been shot silent and so attempted to recoup their investment by shooting additional sound scenes. The result is an ungainly mix than straddles the two eras with some scenes that are silent with intertitle cards and others that come with recorded sound.

The 1929 film is often said to be the first screen adaptation of Verne’s Mysterious Island. This is not accurate on two accounts. The first is that it is a stretch of description to call the film an adaptation of a book when the book has almost entirely been thrown out – there is not even any desert island survival story, while ‘the mysterious island’ of the title only refers to the island kingdom that Nemo rules. The other case on which this is not accurate is that the first adaptation of the book was actually made as part of the silent adaptation of Twenty Thousand Leagues Under the Sea (1916) by Stuart Paton. That version was popular, particularly in that it was the first film to ever feature scenes that were shot underwater. The Mysterious Island takes many allegiances and influences from that film.

Almost all modern characterisation of Captain Nemo are drawn from James Mason’s Nemo in Disney’s 20,000 Leagues Under the Sea (1954), whereas both of the silent films stay closer to Verne’s conception of Nemo as an Indian prince (here John Barrymore looks strictly Caucasian but is at least named Dakkar). The nearest that this film adheres to the Verne novel is that it could be said to dramatise and expand (somewhat) on the backstory of Nemo’s origins that Verne gave in the book.

I had read about The Mysterious Island many years earlier and had been eager to see it. The descriptions and stills that were around looked fascinating. Unfortunately, I have had to make do with the version that currently exists on YouTube. This only runs to 66 minutes long whereas the original version is credited as 95 minutes. (Complete versions and even colour-tinted prints do exist but are not available for review at present). The quality of the print in this version is also very poor meaning that you are not always easily able to see what is going. It gives the impression of having been filmed either off a tv screen or an 8mm projected film – the picture jumps around and you can hear someone coughing in the background.

Crucially, the missing footage has led to the excision of substantial parts of the film’s plot. The film opens with the launch of the submarine, quickly followed by the invasion of the island by Falon where crucial matters like the fact that Dakkar is the ruler of the island and who Falon is are not always clear. (Indeed, if you were to watch the film with your only familiarity with Captain Nemo being some of the modern film versions of Verne, there is nothing to give any indication that Dakkar and Nemo are one and the same – Dakkar is never called Nemo once throughout, for instance). There is also drama with two submarines down at the bottom of the ocean and the truncated plot often leaves you confused which submarine the action is taking place aboard at any one time.

Even when the abovementioned issues are compensated for, The Mysterious Island proves a disappointment. The melodrama aboard the submarines and conflicts and romance are standard stuff for silent movies. The underwater scenes lack the amazing quality that those in the 1916 Twenty Thousand Leagues Under the Sea had and are more often simply supplanted by poor model shots. We are even given an optically enlarged eel in lieu of a giant monster threatening the submarine – it may have been a novelty when the film came out but today the idea of optically enlarged insects, lizards and marine life is something that automatically shouts out cheapness. The film does give us a rather shoddy puppet creature where unfortunately the print quality is so poor that it is hard to tell if it is meant to be an octopus or a crab.

Where the film does start to work are the scenes once the submarine arrives on the ocean floor at the city of the merpeople. The film gives us some visually impressive scenes of the little people lined up (all played by children with masks that give them enlarged heads), towing the submarine away and of the crew going out to confront them in diving suits. The model scenes of the city and submarine are not the best but these are interspersed with enough that looks epic in scale to impress.