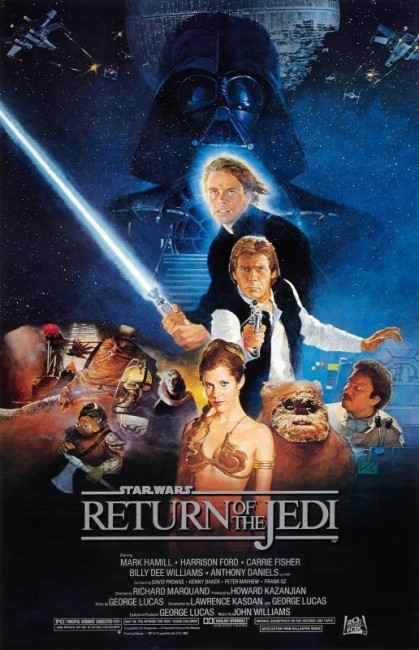 aka Return of the Jedi

Luke Skywalker, Princess Leia, Chewbacca and the droids travel to Tattooine. They sneak into the stronghold of Jabba the Hut where they succeed in rescuing the cryogenically frozen Han Solo. Rejoining the Rebels, they learn that The Empire is creating a new Death Star. They agree to undertake a dangerous mission to the forest moon Endor to destroy the forcefield protecting the Death Star so that Rebel forces can attack. While Leia and Han recruit the help of Endor’s native creatures, the small, furry Ewoks, against the Imperial forces, Luke goes alone to face his father Darth Vader and the Emperor.

Star Wars (1977) had been the most successful film of all time. At the very height of his success, George Lucas announced his retirement from active filmmaking and stepped back to an Executive Producer position for the remainder of the trilogy. The first sequel The Empire Strikes Back (1980) was handed over to director Irvin Kershner and other screenwriters, a canny choice that ended up producing an excellent, if even better, film than the first. Return of the Jedi was the third of the trilogy, which George Lucas handed over to British director Richard Marquand, who had made the silly horror film The Legacy (1979) and had had a modest hit with the Nazi spy thriller Eye of the Needle (1981). (An interesting original choice of director was David Lynch, then of Eraserhead (1977) cult notoriety, who declined the project).

As the finale to the most successful film series of all time, Return of the Jedi is a major disappointment. It feels like an entry that has been flown in entirely on commercial autopilot (Return of the Jedi was an even bigger box-office success than The Empire Strikes Back was) rather than exploring anything new. It feels like a hollow manipulative exercise designed to milk the fans. When early in the film a boggling parade of alien creatures are displayed, it is no longer with the witty invention that the barroom sequence in the first film held, but seems more like an extended commercial highlighting new alien creations that the toy companies can sell, and is a sequence that drags the film to a standstill for several minutes.

The plot feels lazily slung together. The first half exists merely to tie the loose ends of the trilogy together and once Han Solo has been rescued, the plot then proceeds to blatantly rehash the climaxes of the two previous chapters – another spatial dogfight/strafing run designed to blow up the Death Star and another lightsabre duel between Luke Skywalker and Darth Vader.

At the time of the release of The Empire Strikes Back, much publicity was made of the new characters introduced – Yoda, Boba Fett and Lando Calrissian, who seemed filled with much potential – but all of them are trivialized here. Boba Fett and Yoda are killed off with casual indifference; Yoda’s death scene is monumentally unmoving where it should have been a saddeningly emotional highlight; while Lando is pushed to the background and forgotten about. The rest of the characters fare little better. There is little of the appeal they had in the preceding films, more the sense that the characters and actors are just tiny cogs being put through – and ultimately lost in – the giant machinery of an effects vehicle. The acerbic verbal sparring between Han and Leia is entirely missing; she even gets awful lines like “Who else but the one who loves you.” Darth Vader gets a shamelessly sentimental redemption, while the revelation of The Other that was a big mystery left hanging at the end of The Empire Strikes Back is something that most soap operas cringe from, demonstrating that George Lucas never intended the films to be a series in the first place.

Of course, Return of the Jedi has the biggest and the best effects of the whole first trilogy. However, this also has a numbing effect. Everything is determined to be so big and with so much happening that it is almost impossible to take in all the detail. The space battles feature so many ships all fighting at once it becomes a blur. Both the speeder bike sequence and the Death Star attack have been edited so quickly with the intention of making the film move at a breakneck pace that everything passes in a muddy blur.

The furry cuddly toys, the Ewoks, were a blatant pandering to the lower age group in the audience and had most of the adult fans reacting in nauseous disgust. George Lucas subsequently spun the Ewoks off in two tv movies that were released cinematically outside the USA – The Ewok Adventure/The Ewok Movie/Caravan of Courage (1984) and Ewoks II: The Battle for Endor/Ewoks and the Marauders of Endor (1986) – as well as a brief animated tv series Ewoks (1985-7).

After Return of the Jedi, George Lucas suddenly let the Star Wars universe, which he had announced only three years earlier would reach to nine films, fall silent. Many, bar a few faithful hardcore fans who poured over the stories, interviews, the novelizations and comic-books looking for clues, assumed that Lucas’s original plan of a nine volume saga would forever remain uncompleted. As two decades dragged on the chance of that happening seemed less and less likely, until the surprise announcement that Lucas would return to the Star Wars universe. This came about with Star Wars Episode I: The Phantom Menace (1999), Star Wars Episode II: Attack of the Clones (2002) and Star Wars Episode III: Revenge of the Sith (2005). In 2012, Lucas sold Lucasfilm to Disney who produced a new trilogy of films with Star Wars Episode VII: The Force Awakens (2015), Star Wars Episode VIII: The Last Jedi (2017) and Star Wars Episode IX: Rise of the Skywalker (2019). Disney also created a series of live-action spinoff films with Rogue One (2016) and Solo: A Star Wars Story (2018), plus the tv series The Mandalorian (2019- ).