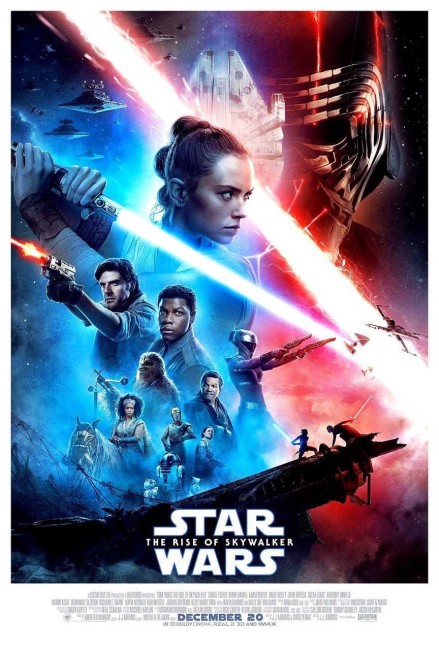 The late Emperor Palpatine has begun broadcasting messages again. Kylo Ren tracks the source of these down to the hidden planet Exegol where the still alive Palpatine has been building a massive fleet of Star Destroyers. Palpatine appoints Kylo Ren as head of the First Order with instructions to hunt down Rey. Meanwhile, Finn and Poe Dameron have obtained intel from a First Order spy about Palpatine’s plans. Rey believes that Luke Skywalker left behind a Wayfinder device that will lead them to Exegol. She, Finn, Poe and the droids set out to the planet Pasaana in the Millennium Falcon on a quest to find the Wayfinder. Meanwhile, Kylo Ren marshals all forces in an effort to find them.

The Rise of Skywalker came with all the assorted behind-the-scenes problems that seemed to beset all of the Disney Star Wars films. With the exception of The Force Awakens, all of the other films have come with troubled production problems with fired directors and studio-enforced reshoots. The Rise of Skywalker was no different. Originally it was set to be directed by Colin Trevorrow, the man behind the indie hit of Safety Not Guaranteed (2012) and Jurassic World (2015), who ended up departing after deterioration of working conditions with Lucasfilm who had rejected numerous script drafts (although Trevorrow and co-writer Derek Connolly still receive story credit). The Force Awakens director and new trilogy producer J.J. Abrams stepped in to take the directorial reins and rewrote the script from scratch.

The Rise of Skywalker finally emerges and did reasonable box-office, if down slightly on the previous entries (it actually earning less than Rogue One in US domestic release). With the poor returns on Solo: A Star Wars Story, the indications seem to be that the public have reached a market glut of Star Wars films – although the sudden popularity of the spinoff tv series The Mandalorian (2019- ), which premiered a month before The Rise of Skywalker, indicates that this might not be completely the case.

After the negative fan reaction to The Last Jedi, which may or may not have been due to review bombing, The Rise of Skywalker feels like a return to safety. The Last Jedi, which this site praised as the best sequel since The Empire Strikes Back, felt like an ambitious attempt to do something different with the series; by contrast, The Rise of Skywalker shuffles around tried and true elements.

J.J. Abrams is a smart director (and an even smarter producer) but what becomes apparent when you take an overview of his directorial oeuvre is that he is the great recycler. Of the six films he has directed to date, five of them – Mission: Impossible III (2006), Star Trek (2009), Star Trek: Into Darkness (2013), The Force Awakens and The Rise of Skywalker – are entries in successful pre-existing franchises and all of them are based on other films and tv shows. Even then, Abrams’ one original film Super 8 (2011) is all about amateur filmmakers trying to mimic Steven Spielberg.

As in the Star Trek films and The Force Awakens, Abrams has become adept at distilling the pop culture vibe of the original down to a superficial and slickly exciting package. His films hurtle by with a great deal of top drawer visual effects flourish that on closer examination appear to have little of the depth or resonance of the original works. Typical such J.J. Abrams-isms intrude here within minutes with the ‘lightspeed skipping’ sequence, which reminds a good deal of the action scenes in Star Trek: Into Darkness – that is to say it is a fast-paced sequence with lots of action but almost nothing of substance to it other than a fast-paced blur of eye candy and kinesis designed to impress an audience.

The third trilogy has the distinction of having brought back every surviving character from the original trilogy – Han, Leia (who here is represented by digitally altered footage of Carrie Fisher left over from The Force Awakens), Luke, Chewie, R2D2 and C3P0, even the Millennium Falcon and Luke’s lightsabre. This rounds it out and brings back an aging Billy Dee Williams as Lando, along with Ian McDiarmid as Palpatine, even cameos from minor background characters like Admiral Ackbar, the Ewoks and Dennis Lawson as Wedge, more of the original Star Destroyers, TIE fighters and Luke’s X-Wing and a visit to the remains of the Death Star. There is even an end joke about Chewbacca finally receiving his medal from Princess Leia.

The Rise of Skyalker is a backwards looking Star Wars film – indeed, it is part of a trilogy whose main plot components have all been ones that were established between 1977 and 1983. It is a story that would make little to no sense if it were for instance the original trilogy and all the others films were prequels because so much of its plot refers to major events in the past. Just like beats that we get here where the Force ghost of Luke raises his X-wing out of the water or Rey’s visit to Owen and Beru’s farm on Tattooine and the final shot of the film with Daisy Ridley and BB8 standing outlined against the twin sunset, many of the scenes here are ones that exist only to trigger nostalgia in fans.

J.J. Abrams co-writes with Chris Terrio, who also wrote the screenplays for Argo (2012), Batman V Superman: Dawn of Justice (2016) and Justice League (2017). The two of them deliver what John Clute terms a Plot Coupons fantasy – the type of story you often get in the fantasy genre where parties go on a quest to unite items to defeat the Big Bad. Here the entire film seems driven by jumps from one Plot Coupon to the next – the information provided by the spy, the quest for the Wayfnder, the search for the Sith dagger with the information encoded on it, the search for Luke’s abandoned ship, the need to find someone to hack the information encoded in C3PO’s head.

The film also suffers from typical bad J.J. Abrams plotting where things seem to happen by absolutely whopping coincidence. Rey, Finn et al engage in a bike chase through the desert on Pasaana and out of an entire planet they just happen to be thrown from their vehicles and land in a quicksand pit of metal shavings that sucks them down into a cave where the very dagger they are looking for just happens to be located.

The other issue is that Abrams’ action sequences are starting to seem recycled. It may simply be that the previous eight Star Wars films and two spinoffs had so reused all the various possibilities between them that there are few new and novel sequences that anyone can come up with. By the time of the prequels, even George Lucas seemed to be running out of original ideas and kept trying to devise novelty ways of having lighstsabre duels.

The bike race sequence in the desert of Pasaana does come with the novelty of flying Stormtroopers but does seem recycled from a combination of the speeder bike sequence in Return of the Jedi and the pod race sequence in The Phantom Menace. The rescue of Chewie from the New Order Star Destroyer seems a rehash of the rescue of Leia from the Death Star in Star Wars – there’s even a sequence where the Jedi among the party (Rei instead of Obi-wan) sneaks off on their own and ends up in a confrontation with the Dark Lord.

This is most notable at the climax. Certainly, the scenes with all the First Order Star Destroyers sitting in a planetary sky and the rebel ships ducking and shooting in between them contain some of the best effects of the third trilogy. (And the sequence does come with one novel sequence where the rebels race off to attack across the top of a Star Destroyer on horseback). On the other hand, you sit thinking that this looks exactly like the rebels and Ewoks’ attempts to bring down the forcefield in Return of the Jedi. Indeed, the Return of the Jedi connection seems obvious at the climax where Rey confronts Emperor Palpatine. The same essential plot plays out in both films – Palpatine tempts Rey/Luke with all power and the ability to sit on the throne, Kylo/Vader does a last minute switch to the Light Side; Palpatine goes down after battling Luke/Rey with lots of flashing energy. The only real difference here is that it is Kylo rather than Palpatine that gets thrown into the conveniently located pit near where all of this takes place.

(Nominee for Best Special Effects and Best Production Design at this site’s Best of 2019 Awards).